Little is known about the ruined city of Mada’in Saleh and the archaeological puzzle at the heart of the ancient Nabataean civilisation. Yet this pre-Islamic site is one of Saudi Arabia’s greatest treasures, proclaimed as the Kingdom’s first UNESCO World Heritage site in 2008 and comparable to Jordan’s Petra, but without the crowds. The Nabataeans remain a mysteries people, but by exploring the ruins of their southern city glimpses of their ancient history appear. 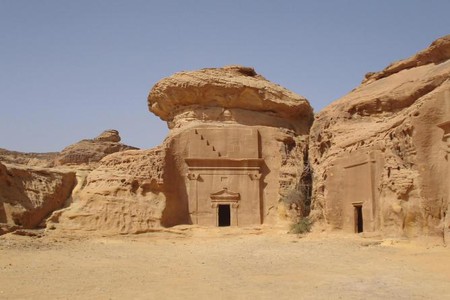 Located in the Al Madinah region, halfway between Petra and Medina, Mada’in Saleh is a ruined city that once served as the second capital of the Nabataean Kingdom. Although the site is under police surveillance and is challenging to visit even today, with special arrangements more and more travellers are discovering this archaeological treasure, walking freely among the exceptional ruins cut directly into the surrounding sandstones.

All that is known about Mada’in Saleh is gleaned from the inscriptions displayed on the site, which consists of over 100 decorated tombs and more than 1000 non-monumental graves, bearing both inscriptions and cave drawings. Although similar to Jordan’s Petra, the Nabataean city of Mada’in Saleh surpasses its better known neighbour. The multi-ethnic symbols and datable graves of the site, as well the the unique sandstone cave structures, enable a better understanding of the Nabataean tribe and Mada’in Saleh, an ancient city that once served as the most important stop on the caravan route between Southern Arabia and the Jordan Valley. 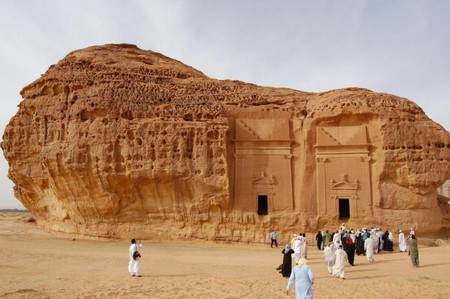 Thanks to the recent archaeological investigations Mada’in Saleh is slowly disclosing its hidden treasures, and the most acclaimed and iconic parts of the site today are Qasr al Bint and Qasr Al-Fareed. While, the former is the Palace of the Daughter, which, with its 16m height is the largest tomb at Mada’in Saleh, the latter stands independently as a huge tomb construction carved into the cliff. Though the tomb was never finished, the following dedication is visible, carved into the stone: ‘To Hayyan, the Son of Kuza and his descendants’.

The Mada’in Saleh ruins are surrounded by hills yet lie on a deserted, volcanic plateau which, thanks to sustainable water sources and fertile soil, has always attracted settlers. The Nabataeans were able to use the natural features offered by the desert, exploiting them to raise Mada’in Saleh to be the crossroads not only for trade but also for the different cultures and civilizations for a millennium. This skill earned the Nabataeans the label ‘one of the most gifted people of history’ by Nelson Glueck, who was among the first to look deeper into the Nabataeans’ endeavours. 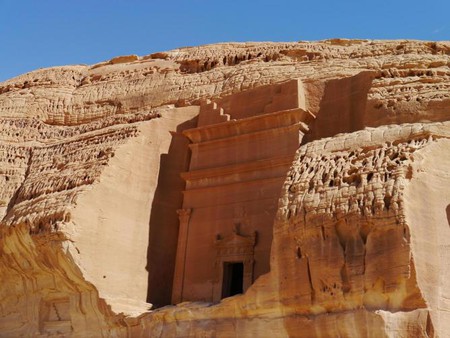 Like so many Arabian tribes, the Nabataeans were originally a nomadic, tent-dwelling pastorals and traders, who raised livestock and developed pioneering oasis agriculture, establishing wells and rainwater tanks. By the 1st century BC Mada’in Saleh already flourished as a city, recognised for its trade with spices, aromatic plants, myrrh and incenses, and until the expansion of the Roman Empire it stood as part of an independent, wealthy Kingdom. What caused the Kingdom’s gradual decline was the shift in urbanisation and commercialisation techniques, which unstoppably altered conventional trade roads and emphasised maritime trading through the Red Sea. In 106 BC the Nabataean Kingdom was annexed to the Roman Empire, which led to the assimilation and eventual cultural absorption of the Nabataeans.

Despite Mada’in Saleh’s obvious historical importance, relatively few archaeological investigations were made in the area until the 21st century. Several sections of the site still remain unexcavated, but current archaeological thought maps the site into three main areas. 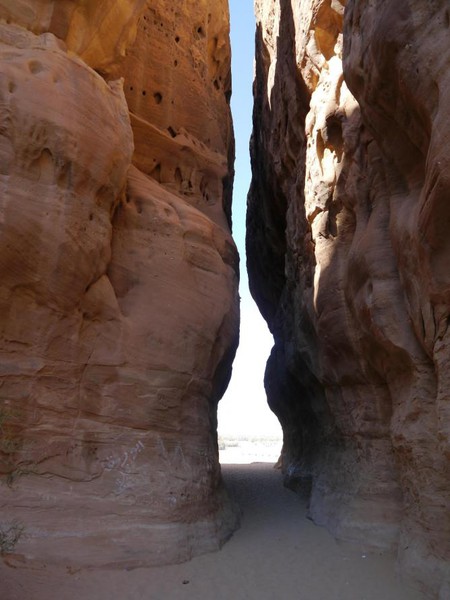 The first of these encountered by a visitor to the site is the ancient city itself, which was built in the first century BC. This is the least understood section of Mada’in Saleh, as the majority of the ruins are still covered by sand. Tentative excavations have revealed everyday objects such as ceramics and coins, as well as traces of a probable citadel, a city wall and a church.

The second part of the site is Jabal Ithlib, which served as the main place of worship, most probably to Dúshana, the ‘Lord of the Mountains’. Located on the northeast of the site and surrounded by rocky peaks, Mada’in Saleh resembles Petra by the embraced and iconic Siq-glen, a 40 metre high carved rock ‘corridor’ giving out onto stunning views of the Diwan, or central court, one of Mada’in Saleh’s most visited parts.

The final area, which hides the antique tombs, is undoubtedly the most important and most significant section of this archaeological site. This area is the home over 100 monumental tombs dating back to the era between 0-75 CE. Though it might appear as if the tombs are be identical, a closer look reveals that they differ in their details. Each tomb shows an immerse façade decorated by mythic figures: masks, eagles, lions and serpents. The epitaphs of the tombs display the moments from the life and death circumstances of the deceased, clearly indicating the social status of each buried person. In contrast to the ornamented doorways, the interior of the tombs is lacking in decoration.

What happened in Mada’in Saleh over the centuries is rather obscure. References to the city throughout history are sporadic: Arab explorer Al-Mawdasi visited in the 10th century, Ibn Battuta wrote about the area in the 14th, and in the book of Travels in Arabia Deserta by Charles Doughy, a Victorian explorer. The real breakthrough came only in the 20th century, when the Hejaz railway line was reconstructed to link Damascus and Jerusalem. This infrastructural development provided better accessibility to the site, but it also damaged some of the archaeological elements. The excavations, however, were put on hold between the First World War and 1960 and since then, the greatest step was taken by the joint collaboration of France and the Kingdom of Saudi Arabia to study the site in a non-destructive manner. Between 2008 and 2012 these joint forces undertook the most extensive excavations yet, which led to Mada’in Saleh’s elevation to a UNESCO heritage site in 2008.

Mada’in Saleh’s cultural and architectural integrity is remarkable thanks to the dry climate and paucity of investigations, which have ensured that the site is well conserved. Regardless of its natural beauty and cultural significance, historically the ruins have rarely been visited by Saudis themselves due to rumours of an ancient curse originating from the Koran; this has left the time-travel tourism experience to western tourists and archaeologists. Though pieces of the Nabataean puzzle are still undiscovered, the excavations at Mada’in Saleh are slowly uncovering the mysteries of the Nabataean kingdom.