Western audiences seeking to envisage the Middle East are likely to encounter its classic representation in Lawrence of Arabia; despite the fact that this depiction is drawn from T.E. Lawrence’s highly subjective account of his own heroics, which was then adapted by screenwriters with their own agendas. 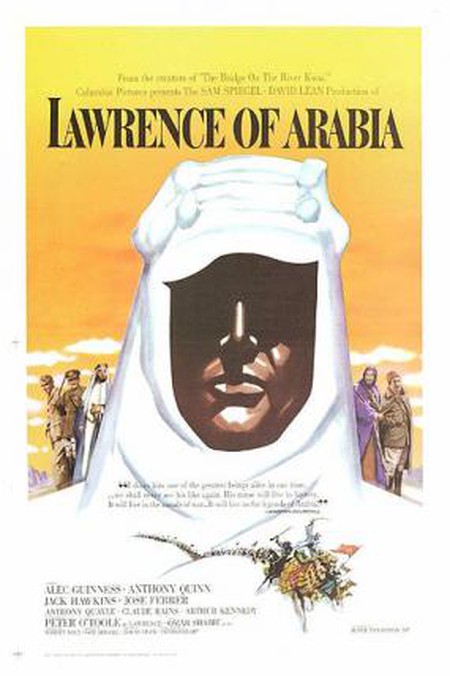 Winner of seven Oscars and grossing a whopping $70,000,000 (by 2004), David Lean’s 1962 military epic Lawrence of Arabia is a classic in the true sense of the word which still has a powerful influence on Western audiences’ perceptions of the Middle East. The film follows the historically elusive figure of T.E Lawrence, whose persona is further obscured by his Hollywood incarnation.

The central drama of the film revolves around Lawrence’s involvement in the Arabic revolt of 1916-18 against their Turkish rulers. His character is by turns a tyrant, hero, savage and adventurer, compellingly played by Hollywood royalty, Peter O’Toole, which only contributed to the intrigue surrounding this figure.

The film’s source is T.E Lawrence’s autobiographical Seven Pillars of Wisdom which has been compared by some critics to canonical literature such as Melville’s Moby-Dick and Dostoyevsky’s Crime and Punishment and praised chiefly for its lyrical and imaginative scope rather than its historical accuracy. Indeed some have suggested that Lawrence was motivated more by a desire for personal heroism and literary aspiration than military ambition or altruism. Before the war Lawrence desired to be a great novelist and his decision to write Seven Pillars is charted in his correspondence as early as 1917. In a letter to V.W. Richards he wrote of the Arabic Revolt: ‘the story I have to tell, is one of the most splendid ever given a man for writing’. An unashamed Lawrence took a defiantly subjective outlook on proceedings: the introduction states ‘in these pages the history is not of the Arab Revolt but of me in it’.

Both screen writers, Robert Bolt and Michael Wilson, brought their own political and sociological motivations to the epic film. Their left wing anti-war leanings (In the 1950s Wilson was blacklisted in Hollywood for being a communist) meant they sought to highlight the futility of the Arabic victory (the revolt actually had many positive repercussions). An article written by Independent reporter Geoffrey Macnab suggests that director David Lean’s chaotic love life was responsible for the expansion of Lean’s imagination beyond the UK.

A key critic of the film, Bosley Crowther, criticised the film for becoming heavily involved in ‘sullen disillusion and political deceit’. Andrew Sarris remarked that the film seemed to aim to intimidate its audiences rather than educate or even entertain them. However, the film continues to enrapture viewers, and maintains its legacy as one of the most watched films made.