If you’re looking for a stunning example of modern construction at its most innovative, feast your eyes on this incredible development.

Saudi Arabian architecture has fully embraced eco-architecture with the creation of KAPSARC – the King Abdullah Petroleum Studies and Research Center. Zaha Hadid Architecture was responsible for bringing this ambitious vision to fruition, and it’s a marvel of imagination and style. 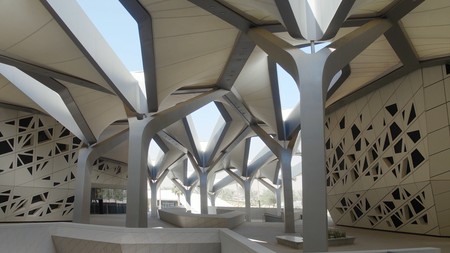 The creative genius of Zaha Hadid

The innovative mind behind this construction was Zaha Hadid. She was the only female architect invited into the competition, and delivered a stunning vision that has gone some way towards defining Saudi Arabia’s image as a country as it moves forward into a bold new future.

Unfortunately, Zaha Hadid and King Abdullah both died within a year of one another, and before the structure came to vivid life. Hadid’s work will now go on to become part of her legacy and a blueprint for her contribution to the world of building design.

This was the first project in her portfolio to be driven by the demands of climate and sustainability. The brief for the competition was to create a building structure with a low carbon footprint, despite its need for year-round air-conditioning. The scorching summers and the desert location required a design solution with energy-conservation built into the very fabric of its structure.

DaeWha Kang was the design director on the project, and worked closely with Hadid to deliver a system that uses nature to solve problems in form and design. Their work referenced cellular geometry and honeycomb sequencing – motifs that their research into nature and efficiency brought up frequently. Each hexagonal shell on the outer surface has an oculus over a courtyard directly below, allowing form and light to merge in unison.

Beauty and efficiency are at the forefront of the design of KAPSARC, but what does the company do? The King Abdullah Petroleum Studies and Research Center is located in Riyadh in Saudi Arabia. It is an independent, non-profit think tank that focusses on the research and study of energy economics, energy policy and technology, and how it all relates to the environment.

KAPSARC brings together international experts from around the world, representing more than 15 nationalities. By developing economic frameworks to help achieve synergy between energy policy outcomes and objectives, KAPSARC proudly champions the strength of its international ties with public policy companies, research institutes and government organisations.

This brilliant white oasis looks like something from a science-fiction movie, or a colony outpost in the furthest depths of space. Palm trees poke out of the platforms as the honeycomb structure spreads across the landscape, looking like an ethereal mirage.

The interior looks like a space station, with pockets of light enhancing the striking white of the structure from the inside too. Some 30 percent of the structure has been made up from recycled materials and all the drinking water is recycled on-site.

A serene worship space has been incorporated into the project, too. As residents approach the mosque, a series of outdoor courtyards with an axial alignment toward Mecca and the Kaaba provide progression towards the site and a place of prayer and contemplation. The mosque is built a metre (three feet) above the outdoor spaces and is surrounded by a reflective pool that glows at night. A series of climbing, floating stone steps takes worshippers to the entrance via a glass bridge.

Aerial shots and drone footage deliver some incredible images of the structure as the roof panels fade into the horizon like white sand dunes. As night falls the building takes on a fresh, new energy. Its crystal-clear glass panes distributing light onto every angle of the structure, delivering an aesthetic of calm to anyone walking its halls and pathways.