The globalisation of artistic practice and the institutionalisation of the practices of Modernism and Postmodernism have become common themes in art theory and practice, as artists come to terms with their place on a global stage. The artist duo Christto Sanz and Andrew Jay Weir interrogated these issues in their exhibition Unparalleled Objectives in Qatar’s Katara Art Centre in Doha, in an exploration of the role of art history and identity in artistic practice. 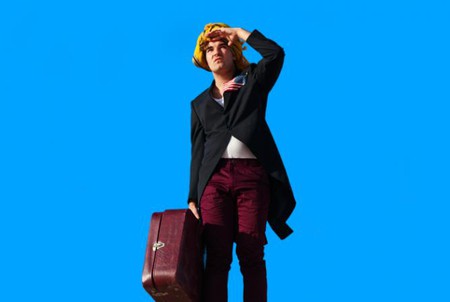 One of the questions asked most often in art historynowadays is whether art history has gone ‘global’ and what does it mean to practice art history outside the Western world? Even in North America, a variety of formats and media contrast today with the linear aspirations of an art history—an entirely European project—conceived as the confirmation of the grand political narrative born out of Greece and Rome. Recent archaeological findings—and the reexamination of those already canonical—have also changed this panorama and the traditional tripartite strategy of dividing art into symbolic, figurative, and abstract periods, inherited from Hegel. For example, an exhibition held at the British Museum, between February and May 2013, Ice Age Art: Arrival of the Modern Mind questions whether abstraction was not one of the capabilities that human beings acquired with the birth of the modern mind, or, that is, the mindset for human culture—and narratives—during the Ice Age.

That being said, there’s no longer one art history but many. At the same time, though, it would be still early to speak of ‘global art,’ certain practices and strategies—particularly those born during the high era of modernism—have been adopted by the public worldwide and metamorphosed into various international movements and the art world—publications, fairs, galleries—seems to demand an uniform code of seeing, or at least, of perceiving. In the Gulf region, nevertheless, the transitions between traditional, modern, and contemporary (definitions that really say everything and nothing at the same time) have been far less smoothed out, and in the era of identity politics, art still seems quite unable to freely negotiate the real and virtual extensions of identity that have come with globalization and the Internet to the most of the art history world. It is common to hear that the art movement in the Gulf began less than ten years ago with the rise of Dubai.

Yet nothing could be further from the truth: schools of painting—somewhat in the tradition of European modernism—have been consolidated in Saudi Arabia and Bahrain since the 1930s and conceptual artist Hassan Sharif has been working in his native Dubai since the 1970s. Perhaps what is meant here is that it still has not been possible for contemporary art from this region to articulate the vast transformations of the social and cultural sphere undergone since the post-colonial era that saw the independence of the Gulf states. The question here is no longer that of ‘Modernity’, which can be studied through the appearance of certain institutions, architectural forms, and political processes. The condition of ‘Postmodernity‘ whether one subscribes to the term or not, is visible to the eye of any visitor to Doha, Dubai, and Manama. What does this condition mean? Perhaps it is something to do with heterochrony—that time is out of joint! 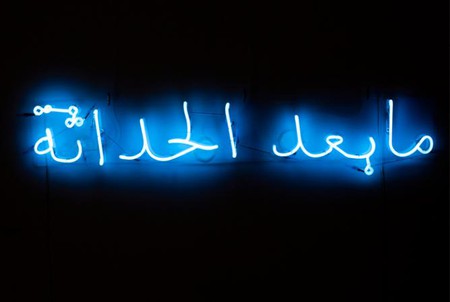 A singular project, carried out in Doha, by the artist duo Christto Sanzand Andrew Jay Weir (born respectively in Puerto Rico and South Africa) in their exhibition Unparalleled Objectives held at Katara Art Center in Doha in 2012 and curated by Mayssah Fattouh, set out to explore these transformations while embedded in a rich set of practices articulated by contemporary art not necessarily from elsewhere, but nearly everywhere. At a time when Gulf artists are still preoccupied with notions of identity—perhaps mourning without knowing, an identity already lost—the duo’s proposal is uncanny in its appropriation of everyday life as a discursive order and not merely an optical reflection. The exhibition, conceived as photographic units of meaning, unfolds with larger ambitions such as that of videoand performance. The photography isn’t built from casual or controlled accidents but rather, as stagedenvironments.

The situational aesthetics of Victor Burgin takes form in their works, not as an extension of the materials but as a message, out of which objects are generated. The total realities of the Gulf presented in these works, not without the strategic irony of pop art, reproduce accurately the state of transition towards the contemporary. This contemporary is embodied by the urban landscapes of the Gulf that are no longer temporary, but rather in a permanent state of transition in which the natural flow of time has become dislocated from a linear source and resembles more the state of being suspended, a time warp, a great zone for disentanglement and the continuous negotiation of identity. While a lot of the art in the region seems overly concerned with the heritage, few are capable of articulating this alongside the postmodern anxieties.

Reality and identity are performed out in the region—and this is what Sanz and Weir capture with great detail—in the manner of a simulation, somewhere between parody and political allegory, in a sequence of images that supposedly have a referent in ‘real life’. The truth is that these images and constructions are only referential in relation to each other and the lived time of people seems somewhat abstracted and prey to this homogeneous time—depicted in the photographs with a cyan blue colour as a background, the same colour associated with cinecolour and pools—in which the absolute present swallows everything in its proximity. Both the past and the future, encompassing the full range of memories, histories, and expectations, appear as mere extensions of the simulation which encapsulates the order of society not as an organic whole but as a museum display: it is constructed ideologically to appear seamless and smooth-edged at the contours. 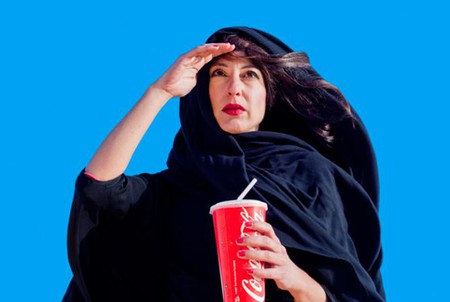 For the art historian obsessed with materiality, every serious work of contemporary art must recapitulate, to some extent, an historical sequence of objects to which it belongs. Certain artistic practices are set out to transgress this periodic narrative marked by the cultural ambitions of art history to illustrate a body politic. Can art under such circumstances contribute to the reconstruction of political space? The answer is particularly difficult in the Gulf, but one could say that articulating the contemporary anxiety over the abstractness and timelessness of experience is an intersection between politics and aesthetics, to the extent that reality is not being made into an object of study but rather being presented as a question mark. In an era of overly politicised art, whose ideological content supersedes its objective content, one cannot help but notice how Sanz and Weir draw attention towards the fabrication of politics as an autonomous space, as conceived by media in the age of globalisation.

Objects are not left alone to speak but rather re-arranged into fuller orders and re-enacted in contexts of mass production that present globalisation and ‘Modernity’ not necessarily as positive or negative influences—the answers to this question are both individual and epistemological—but as conditions. This condition—they call it postmodernity, but there are many names for it—does not have to be conditioning, as much as it is a platform for staging identities and therefore, nations, on the global spectacle of images. If there were to be an art history today, it would be a history of the imageand of the moving image, which is in itself, a technical impossibility, because insofar as it would be a history of perception, it would be necessarily dystopian and a-historical. In Sanz and Weir’s work the objects become objective and objectives, without following a trajectory but rather existing suspended, ripe with impossible possibilities. 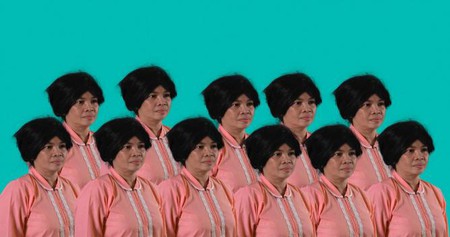 The Factory of Good Intentions, 2013 I | © Christto Sanz and Andrew Weir

Hyper-spaces are no longer science fiction. They can be seen demolishing the pedestrian scale in many of the world’s mega-cities, and deeply transforming the human eye in unexpected ways. It is only logical that these experiences had to be appropriated and intervened by a contemporary art that has for long outgrown its own material limitations into concepts where the discursive precedes the visual. Unparalleled Objectives and subsequent works of the artist duo, such as the more recent, The Factory of Good Intentions (2013) seem to have been deployed not merely as reflections of the spectacular as staged in the Gulf but as amicrocosm of the current global order, without forgetting that total spaces do not exist. Spaces are mnemonic illusions and all geographies remain to be conquered and shaped, by every coming generation, in order to make a world for themselves. Will the promiscuity and fleetingness of the image be enough for this? That we don’t know yet.