An Architectural Guide to the National Museum of Qatar 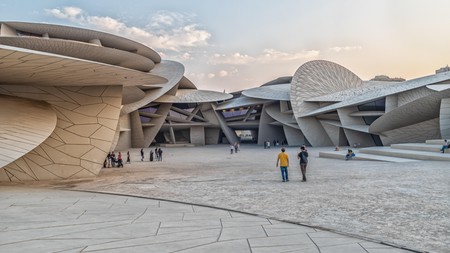 The history of human habitation in Qatar dates back some 50,000 years, but until recently, the country has never had a museum to showcase that rich heritage. That changed in March 2019, when the National Museum of Qatar opened its doors.

Designed by the French architect Jean Nouvel, the building was named one of the World’s Greatest Places to Visit in 2019 by Time magazine. Its shape, made up of multiple interlocking discs, was inspired by a rare mineral formation known as the desert rose – a delicate crystal that’s occasionally found at the bottom of evaporated salt pans in the Qatari desert. Nouvel wanted the museum to be the first thing that visitors saw when they landed at Doha’s Hamad International Airport. Its striking appearance will certainly ensure it’s one of the things that sticks longest in their memory when visitors leave. 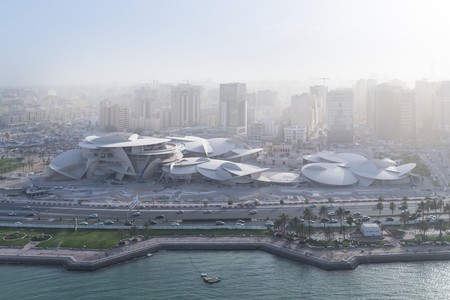 Designed by Ateliers Jean Nouvel, the museum’s structure was inspired by mineral formations found in the Qatari desert | ©Iwan Baan / Courtesy of National Museum of Qatar

More than 500 individual discs combine with Islamic-style archways to create dramatic interiors, whose lines are highlighted by the innovative lighting that casts shadows and allows streams of light inside the building. The sweeping petals of the exterior mimic the flow of desert sands in the wind. 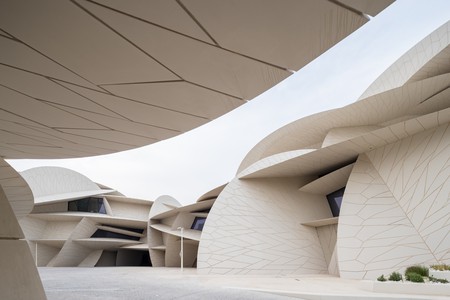 The museum was designed to bridge the gap between the past and the present, with the modern shell built around the recently restored palace of Sheikh Abdullah bin Jassim Al Thani. Opened in phases, the National Museum of Qatar was seen as something of a statement by the wealthy regional power. As well as Nouvel’s contribution, the museum’s design was the product of a collaboration with a number of internationally acclaimed architects, including the Japanese-Australian Koichi Takada, who designed much of the interior independently of the Frenchman. Takada said he wanted to represent the development of a “modern state as the cultural hub of the Middle East”. 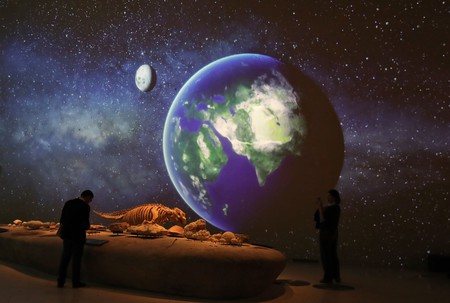 Spread across 11 individually designed galleries, the museum’s exhibits explore the history and culture of Qatar and the wider Gulf region. Loosely laid out in chronological order, the galleries begin with the natural history of the Arab world, before moving through Bedouin culture, the tribal wars across the Arab Peninsula, the establishment of the State of Qatar in 1971, and the development of the modern state since the discovery of oil.

Who was responsible for developing the National Museum of Qatar?

The $434 million (£351m) museum project was initiated by Her Excellency Sheikha Al Mayassa, the sister of the ruling Emir and the Chairperson of Qatar Museums. When Sheikha Al Mayassa first announced architectural tenders for the museum, she told guests at a press conference that she wanted to build “the Smithsonian in the sand”.

The National Museum houses rare artefacts, including 8,000 household and tribal items, textiles and traditional Arab costumes, works of art, jewellery, books and historical documents. Each section represents the lived experiences of the Qatari people, but the architects were given the freedom to approach this project from their own external perspectives. Nouvel said that he “wanted to highlight the modernity in the building, because in Qatar, with pearls, then oil, and after that gas, the economy has completely changed many times over”. 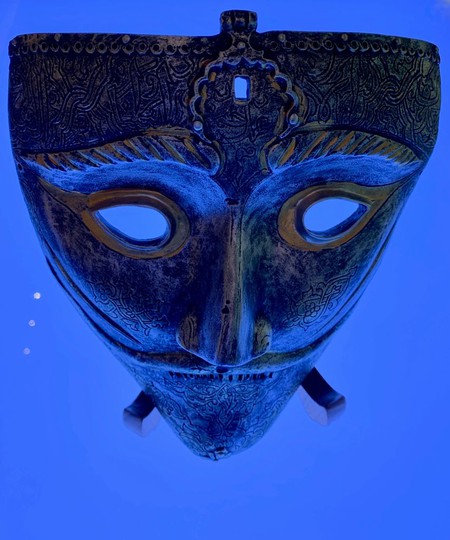 The museum is home to a number of rare artefacts including a decorative, gilded war mask from the 15th-century Ottoman wars | © Rubina A. Khan / Getty Images

Takada suggested that with the new museum, Qatar would benefit from the ‘Bilbao Effect’. When the world-class Guggenheim Museum was built in the Basque city of Bilbao by Frank Gehry, it attracted a new wave of tourists. The hope is that both the striking architecture and the exhibitions in Qatar’s new museum will do the same for the Emirate.

What are the different amenities inside the museum?

Museum shops
Takada decided that the shops should be as spectacular as the museum, so he set out to design the most striking gift shop imaginable. The architect was inspired by the Dahl Al Misfir (Cave of Light), an underground cave system in the Qatari interior formed from gypsum crystals. Using 3D-modelling, Takada commissioned 40,000 individually carved wooden pieces – cut in Italy by master carpenter Claudio Devoto – which were then assembled by hand on site in the museum building. 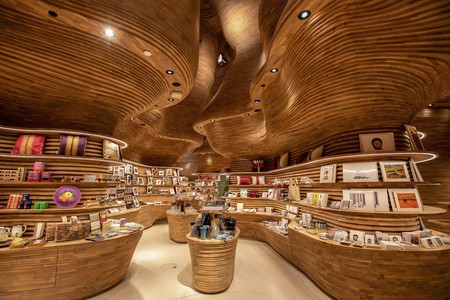 Café 875
Café 875, named after a mark of gold purity, was designed as a place for visitors to experience the majlis, the epitome of Bedouin hospitality. The fabric used throughout these four medallion-shaped rooms follow the black and white patterns of the Al Sadu weaving tradition famous to Qatar. Each medallion room has a lighting effect that projects a ring of gold light on to the ceiling.

Desert Rose Café
Located on the ground floor of the museum, opening onto the lagoon and the Caravanserai courtyard, the Desert Rose Café is nestled under a disc, so that guests feel like they are stepping into the shade of an enormous desert rose. The dimmed lighting creates a soft glow, much like dusk in the desert, offering visitors some respite from the strong midday sun and the bright lights of the museum galleries.

Jiwan Restaurant
On the fourth floor of the museum, the Koichi Takada-designed Jiwan Restaurant offers panoramic views across Doha Bay. The interior design draws inspiration from the Khor Al Adaid inlet, where the desert meets the sea. The colours of the carpet symbolise the transition from sandy beaches to blue seas; the ceiling is inspired by traditional fishing nets that sway overhead; and four million crystal beads glow from above, in celebration of the country’s long-established pearl diving industry. The outdoor terrace offers views over the rose-shaped building, making it a great place to watch the sunset.