Got Milk? Qatar Is Airlifting Several Thousand Cows to Solve its Dairy Crisis 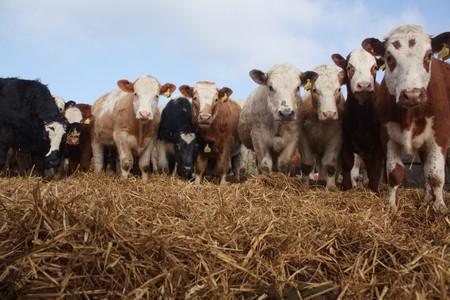 When you’ve got as much money to play with as this nation does, you can do some pretty creative problem-solving.

Qatar, the Middle Eastern nation, has a problem: Due to its recent cooling of relations with Saudi Arabia, Bahrain, Egypt, and the UAE, the food imports on which the country relies have slowed to a near-halt. The ensuing run on grocery stores and resulting empty shelves makes pre-hurricane preparations in the U.S. look like child’s play.

The solution? One businessman is pledging to start an overnight dairy industry in this desert nation, importing 4,000 cows from the U.S. and Australia, to be housed on a site the size of 70 soccer fields. The bovine airlift will take up to 60 flights on Qatar Airways, to the tune of a mind-boggling $8 million, according to NPR. Which, considering that Qatar is the richest country in the world, is maybe just a drop in the bucket if it means greater food self-sufficiency.

Milk production is expected to begin by the end of June, and is hoped to satisfy one-third of the country’s dairy demands within a month. Just in time for peak ice cream season, that is.