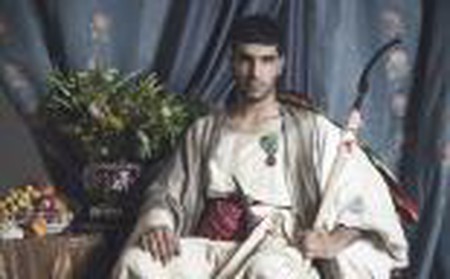 The most recent project of Palestinian fashion designer Omarivs Ioseph Filivs Dinæ (aka Omar Joseph Nasser Khoury) – Official Portrait – is the final part of ‘The Ceremonial Vniform’. Manifested in various characters, including a martyr, fighter, worker, farmer and politician, this project concentrates on the masculine framing of the Palestinian male. Culture Trip sat down with Omar to discuss his fashion work. 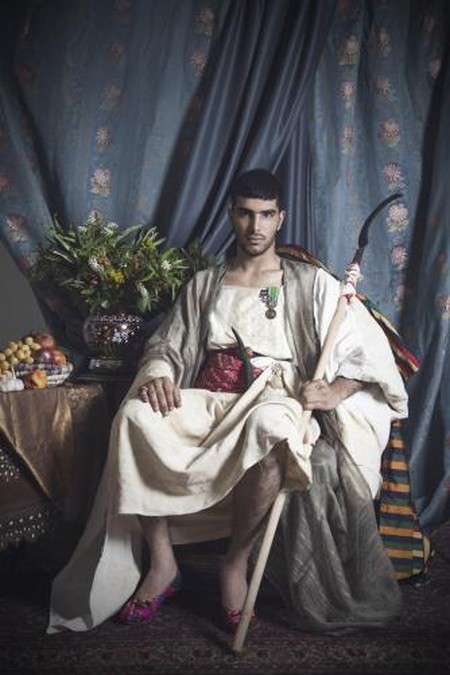 Q: Although very clichéd, how did you ‘get into fashion’?

A: My start was in itself very clichéd! I had the impression that fashion in Palestine was a totally unexplored field and I was worried and anxious about ceasing the opportunity. I felt I must use fashion and dress to communicate to the world the strife of the Palestinians. So, I turned down five offers to read biological sciences in the UK and USA and went to Camberwell College of Art for a foundation course in Art and Design.

At the time, 2005, this anxiety was a very real driving force. Now things are different, I realised with time how the majority of Palestinian creatives have been centrally focused on the Palestinian Cause and their work was seen as an instrument of resistance beyond criticism. Whereas you have work that is pioneering, it is still very much the case, that mediocre works and incompetent artists are celebrated and tolerated on the political basis of their work. It is very easy to fall in this trap.

Q: How important is it in the fashion industry to have your own signature style? Do you feel that yours is focused on Arab identity?

It’s instrumental to your success. As an industry and a typical capitalist establishment, fashion hinges on identifiable differences, clear characteristics, and brand identity.

On the other hand I am fundamentally opposed to the notion of identity, especially in the singular term. So I try through my work to dismantle and subvert these ascribed/acquired identities. As ever changing social constructs, like ethnicity, religion, nationality and taste, identities are, contrary to what the mainstream says, are never fixed in space or time.

Q: Why the change of name?

A: All the names I use are technically mine, translated or combined. So strictly speaking, it’s a change in structure and interpretation. I like to explore the potential of destabilising established norms through the very personal. My name is, therefore, perfect, insofar that it is intimate and personal but also because names are always associated with power through religion, race, status and lineage. 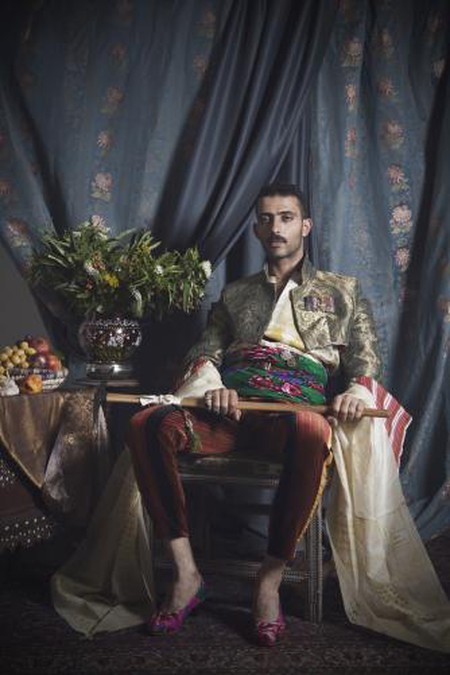 Q: How did the collaboration with Tarek Moukaddem (photographer for the series) come about?

A: I was standing outside a bar seething because I had just been rejected by someone I took a fancy to when he came out and we started talking. He asked if I were a dancer, as I was wearing a pair of sirwal-jeans (pantaloons) that I made earlier that week. I was really in no mood to talk but he was adamant. He then asked me to make him a pair. I did eventually. That was in 2009 when I was in Beirut doing an internship at INAASH (Association for the Development of Palestinian Camps).

INAASH are a Lebanese-Palestinian women’s organisation that has for more than 40 years been supporting Refugee Palestinian Women in Lebanon through embroidery. Out of all the organisations in Palestine and the shatat (diaspora) they have managed to maintain some dignity and style to the work. They are fussy about materials, size of stitch neatness and colour combinations.

Q: Given the very stereotypical imagery of the Middle East and the Arab male in particular, how do you think your series The Ceremonial Vniform is different?

A: Who is the stereotype and in whose gaze? The Ceremonial Vniform is not trying to correct a misconceived notion or image, because that would succumb to the parameters of a pre-set dialectic and gaze. Rather it is a commentary on patriarchy and nationalism as global phenomena from a Palestinian perspective. The reason I concentrate on Palestine is because that is my local context and the realities there directly affect me. I think what Simone de Beauvoir said about women in her book the Second Sex, ‘one is not born, but rather becomes, a woman’ is also true of men. A cis-male is not born a man, but he becomes one. Basically, I am not trying to vilify or save anyone through The Ceremonial Vniform, that would be too reductive and presumptuous.

Q: How important was it for The Ceremonial Vniform series/work to be shown in London? Was it the first time? 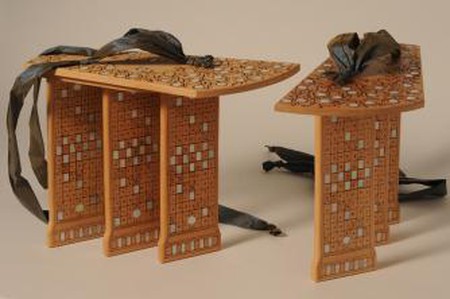 A: The Ceremonial Vniform was never fully shown in London. The Presidential Panel and the PLO Clogs were shown at the Mosaic Rooms Gallery as part of the Young Artist of the Year Award (YAYA) 2012 exhibition. It was a conscious decision not to have the entire work shown in the group show, because I felt that would somehow diminish it. In retrospect I am glad I didn’t as I am planning to have the entire project shown in its totality in a solo show.

London is ironically significant because your legitimacy in the West makes you worthy of note back in Palestine. What is very true of many Palestinian creatives is that we tend to launch our careers internationally, or in exile if you will, rather than the other way round. There is a very typical pattern where you find many artists, designers and now curators studying abroad. We are hopping around from one residency and project to another, joining conferences and talks but rarely ever settling down to a studio and producing any substantial work. The marker of success seems to be how many different world capitals are listed on your CV rather than the strength or local relevance of your work.

You have to consider where you fall in this dynamic which is very much a product of a colonial and imperialist cultural hegemony. When my first exhibition Silk Thread Martyrs was launched in London, also at the Mosaic Rooms in 2011, people back in Palestine knew about it. Everything else I did in Palestine within the very circles that were so congratulatory about my London show went without notice. There is a problem here and London is not the solution.

Q: Where did the inspiration for The Ceremonial Vinform come from?

A: Predominantly from the Palestinian National Authority, the official subcontractors to the Israeli Occupation. 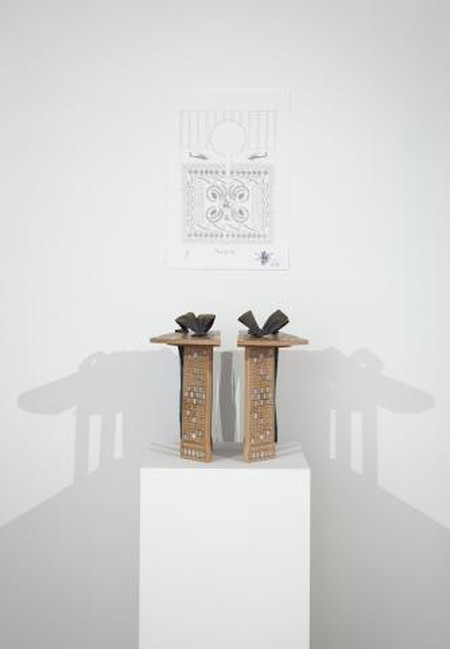 Q: What’s next for you? Anything exciting in the pipeline?

A: Other than starting an MA in Social Anthropology at Goldsmiths next year and another collection, I am planning a big 9-month project with INAASH in Beirut that should start at the beginning of 2014. The aim is to concentrate on the development of their design system. The project will seek to introduce new stitching techniques, expand the work digitally and technologically, and systemise the process of design. I am also hoping to expand INAASH’s collaborations with local and international experts in the field of fashion and dress, reach out to more embroiderers and craftspeople, improve overall skills and quality and better share their work more broadly and globally.

All these plans primarily depend on funding, and the situation in Syria when it comes to INAASH. Very sobering how war and money always seem to have a say!

Omarivs Ioseph Filivs Dinæ is a Palestinian fashion designer, unglamorously and nomadically living and working between Palestine, London and Beirut. An alumnus of London College of Fashion, he is preparing to return to university in September 2014 for an MA in Social Anthropology at Goldsmiths in London. His first collection, Silk Thread Martyrs, was debuted in London in 2011 at The Mosaic Rooms Gallery. Consequently, a garment from that collection was acquired by The British Museum – its first ever fashion acquisition. He has since worked on several research, training and curatorial projects pertinent to dress, craft and fashion.