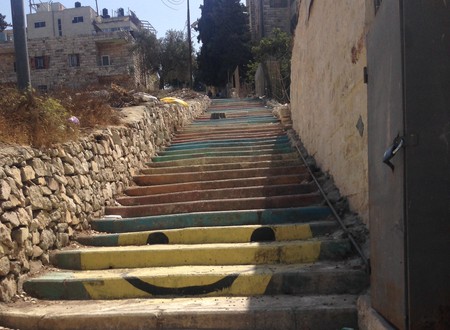 Ramallah is fast becoming known as the culture capital of the West Bank, and for art lovers, it is easy to see why. Home to an increasing number of galleries, institutes, and arts and cultural non-profit organisations, the city has become a hub of creative thinking, thanks to its young and forward-thinking population and a new generation of boundary-pushing artists. After a day exploring, wind down at one of Ramallah’s cultural evening hangouts, offering busy programmes of film screenings and live music.

Although conceived originally in 1997 as a space for the celebration and preservation of Palestinian culture and heritage on the fiftieth anniversary of the Nakba, the forced exodus of 750,000 Palestinians from their homes during the creation of Israel, the Palestinian Museum has only this year opened the doors to its first exhibition. Set in the rolling hills of the village of Birzeit, located just outside of Ramallah, the geometric building, designed by Irish architects Heneghan Peng, cuts a striking figure in the surrounding landscape. After exploring the exhibitions and admiring the architecture, wander through the museum’s grounds, filled with groves of almond, pomegranate, and apricot trees, as well as many other plants native to Palestine. To access the museum from Ramallah, take a shared taxi from Irsal Street, near to Manara Square.

Tucked away in Jawwal Square, Zawyeh, meaning ‘corner’ in Arabic, is one of the leading independent contemporary art galleries in the West Bank. Founded by the art dealer Ziad Anani in 2013, Zawyeh showcases the work of local artists, including a number from Gaza, often focusing on innovative and moving portrayals of life under occupation that sometimes broach deeply personal or taboo subjects. Zawyeh also has a great range of posters and postcards available for purchase, which make for great souvenirs and gifts. More details can be found on their website.

Gallery One is another must-visit contemporary art space in the city, showcasing work by both established and emerging Palestinian artists living in Palestine and in the diaspora. They run a programme of regular talks with contemporary artists such as Manal Mahamid and Wafa Hourani, giving visitors the chance to engage with the artists exhibiting their work.

Al-Mahatta, meaning ‘the station’, was established in a disused bus terminal in the city centre in 2008, making it Ramallah’s first professional art exhibition space. The gallery now exhibits both local and foreign artists’ work, striving for cultural exchange and the building of civil society in Palestine through art. The gallery currently consists of an exhibition hall and video space, with a bookshop and cafeteria opening soon. See their Facebook page for details.

A hub of creative and social activity, the Khalil Sakakini centre hosts a regular programme of art exhibitions, film screenings and live music nights. The friendly and convivial atmosphere makes it easy to get chatting to like-minded locals and expats. Check out their schedule here.

A must-see for both architecture and photography lovers, Dar Zahran, a historic 18th century building in Ramallah’s Old City, houses an art gallery as well as an exhibition of photos documenting the evolution of Ramallah from 1850 to 1979. Fair trade souvenirs are also on sale in the gift shop. More details on their Facebook page.

The wealthy Qattan brothers’ foundation plays a key role in Palestine’s art scene, providing key grants and residencies to local artists. There are regular exhibitions held at the foundation, check here for the events programme.

Radio is a lively bar, restaurant and venue space hosting live music nights as well as regular art exhibitions. Expect a range of events from live jazz to house DJ nights, alongside a showing of the latest contemporary art. A staple of Ramallah’s nightlife scene, stay late and bring your dancing shoes. Check out the events on their Facebook page.

Summer and autumn constitute the festival season in Ramallah, hosting a range of arts and cultural events across the city. /si:n/ is a video and performance art festival held in June, showing a diverse range of progressive art projects. The Qalandiya International Festival is held every two years in October, running a programme of contemporary art events across Palestine. FilmLab, a non-profit organisation who run filmmaking workshops and training programmes for young Palestinians, put on a film festival called Days of Cinema throughout October, consisting of film screenings, workshops and discussions. Riwaq, an organisation dedicated to preserving and promoting Palestinian architectural heritage, host a biennial every second summer, dedicated to generating discussions about architecture, space and politics across Palestine.

A post shared by Qalandiya International (@qalandiya.international) on Nov 28, 2016 at 12:11pm PST