An elephant courting a Botero woman; armed monkeys stealing Warhol’s Marilyn Monroe; bears resting on a Jeff Koons balloon dog; in her recent series Under the Influence, Russian artist Anna Dudchenko employs iconic artworks by sought-after artists — from Takashi Murakami to Jackson Pollock — to question the contemporary art scene and the success of blue-chip artists. We talked to the artist about the art scene in Oman, where she has been based since 1999. 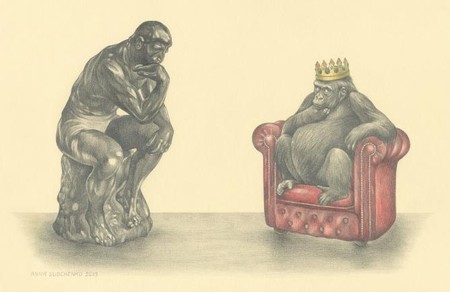 How would you say the cultural and artistic environment in Oman has influenced you as an artist and your work?

You can say that we have a mutually beneficial relationship. The rich cultural life in Oman has had a positive influence on me and my art, and I, in return, have made a lot of effort trying to improve (the country’s) artistic environment. When I first came to Oman in 1999, I could count all the artists in the country on my right hand. Now, every second person seems to be involved, directly or indirectly, into some sort of artistic activity.

Three new galleries have opened up since then, numerous exhibitions were held in the last few years, and Omani artists have finally started making their presence more noticeable in the international art markets. I, personally, organized multiple workshops for art students and art lovers, curated a dozen exhibitions, built up an extensive database of art collectors, and ran a regular column about contemporary art in the leading daily newspaper. Oman’s geography, history, and rich cultural diversity provide the perfect opportunity for the artists from various backgrounds to learn new skills, share their experiences, and interact with each other in order to provoke artistic dialogue. 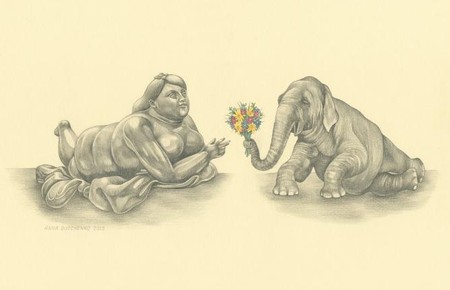 Your artistic aesthetics and your studies mainly come from Western culture. How does your practice fit in the contemporary art scene in Oman?

When it comes to art, it does not really matter where you come from. What’s more important is what you bring with you. If you have something to say, if you have ability to surprise, provoke, entertain, amuse, break boundaries, and make people think, you will fit into any contemporary art scene.

Under the Influence raises questions regarding what constitutes contemporary art by assimilating your aesthetics and ideas to artworks by internationally-renowned artists. What has triggered the need to explore this subject at this stage of your artistic career?

In my artistic career, I have come across many people who liked and appreciated art, but when asked they could not name more than one or two contemporary artists. In my series Under the Influence, apart from creating something humorous and amazing, I also wanted to highlight some of the best and the most successful artists of the 20th and 21st century. Needless to say, the serious art collectors did not need any explanation, they knew perfectly well what it was all about. 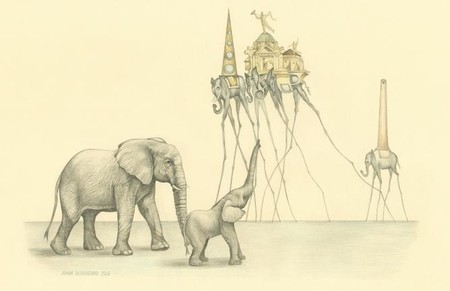 You let humorous animals (bears, dogs, monkeys) interact with iconic artworks, but most of them appear inquisitive rather than enthusiastic. Is there a veiled criticism towards the often sceptic approach from viewers towards contemporary art?

Not at all. I do not criticise and I do not judge. I simply tried to create a dialogue between the viewer and the artists and raise questions about contemporary art and art of the 20th century. Some of the animals I used in my works look intrigued, enthusiastic, others are more skeptical and not very amused… 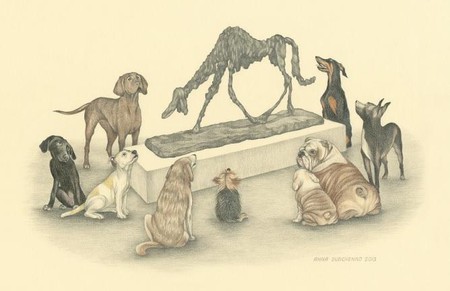 Your drawings invite the viewers to independently question the meaning of contemporary art, what constitutes art and what defines an artist. What are your personal motivations, if any, that keep you going as an artist and excite you when you are working on projects or individual pieces?

I wrote an article about being an artist for the Muscat Daily. It is one of the toughest jobs out there. You have to understand that the work of an artist is very difficult, because it cannot be done (merely) with force, with diligence, or with intelligence. You can do everything else in life using strength, and application, and intellect, but in art, these things produce absolutely no result. Do your research, take time to study, learn techniques, practice, experiment, make mistakes, start over, and, most of all, think about what you are doing and what you are trying to produce. 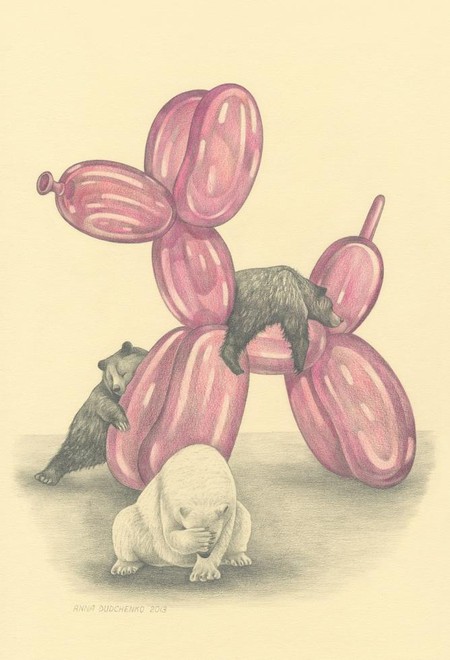 Do you believe that the public reserves a different or lesser respect towards contemporary art?

Welcome to the world of contemporary art! A world which is run by a select group of people who can create, promote, buy, sell, exhibit and decide the success of the art; a world where the talent, skills, and craftsmanship of an artist become insignificant; a world that can make you into one of the leading and most sought-after artists in the world, or ruin your career before it starts. Art is not art anymore, it is a huge multi-million dollar business, and only a few hundred people in the world have any real voice. 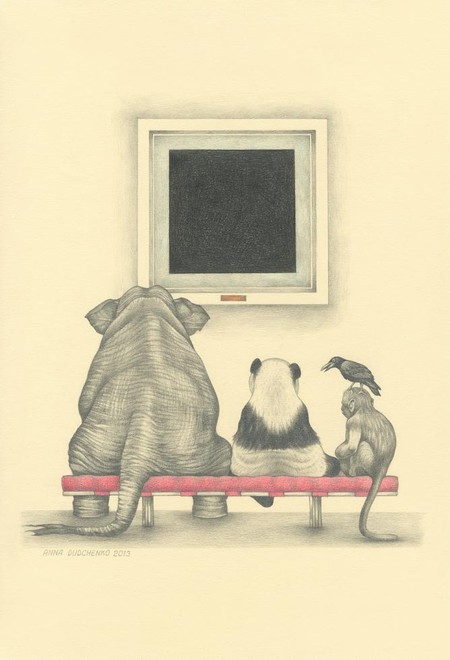 Throughout your artistic career, you have experimented with different styles and techniques. Under the Influence for instance, is your first exhibition of pencil drawings. Is this something that you would like to explore further or was it a choice strictly related to this series?

What matters are the idea and the meaning that you put into your art. Materials are secondary. I work with different media: oil, spray paints, epoxy, ink, watercolours, markers, pencils, but they are just tools to implement my ideas. 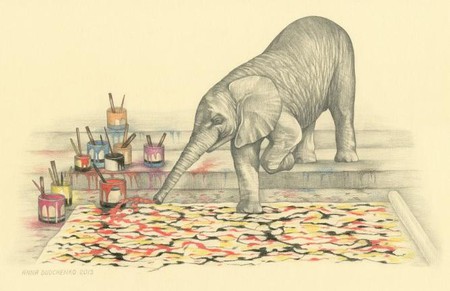 What would you say are the artistic styles that have influenced you the most?

I do not believe in styles. The style is just an empty tool to express yourself. A true artist has no style. If he does something revolutionary, extraordinary, it will be named after him. 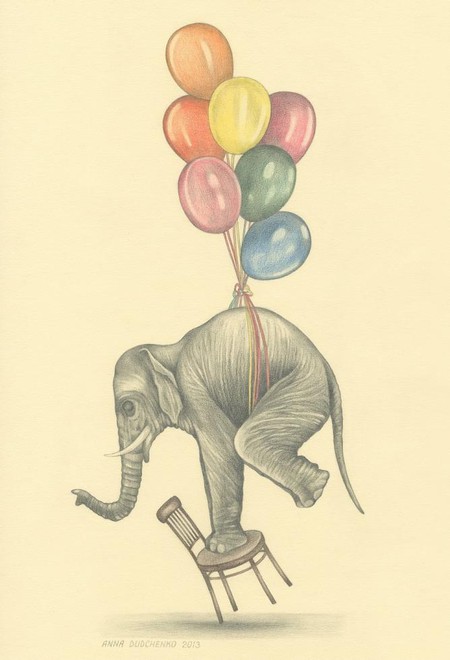 In one of your drawings, two monkeys are depicted stealing Andy Warhol’s Marilyn Monroe painting. If you could steal one piece of art, which one would you take?

Difficult question. I have a long list. But if the house were on fire, Giacometti would be the first one I would save. 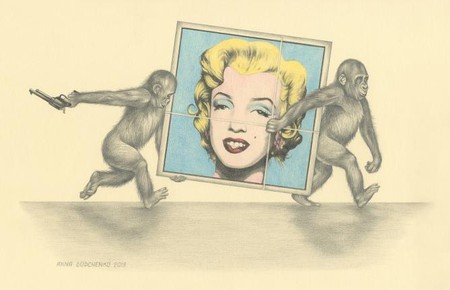 In Under the Influence, we see an elephant painting a Pollock, a monkey pondering philosophy in front of Rodin, another elephant offering romantic flowers to a Botero. How would you depict one of your imaginary animals in front of one of your artworks?

You have just given me an idea for my next drawing. I should do one with my art in it. Don’t know yet, let me give it some thought. 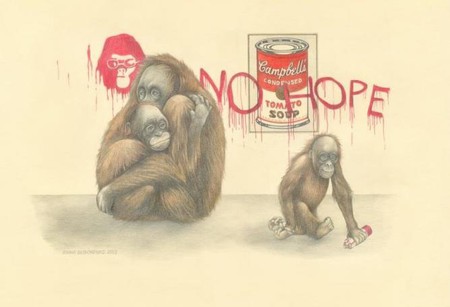 Warhol | © Anna Dudchenko
Give us feedback