A Tour of Oman's Architectural Landmarks 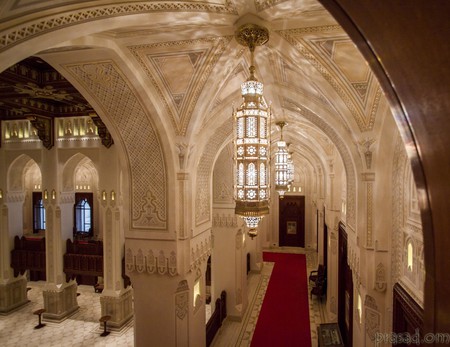 Oman‘s beauty is not only shown through its nature, but also through the culture and unique Omani heritage that is clearly presented in every corner of its land. So, for a completely unforgettable vacation, we have gathered the top landmarks that proudly show off the Omani architectural beauty.

Mosques in Oman have their own architectural charm and Islamic design. As the country’s majority population are Muslims, there are mosques built almost in every corner of every city. Some mosques are big, with places for men and women to pray, as well as a library and rooms for Islam and Qur’an lessons. Other mosques are small that are built for daily prayers, and usually don’t call for the Juma’h (Friday) prayer, which normally require bigger spaces for the large numbers of people. 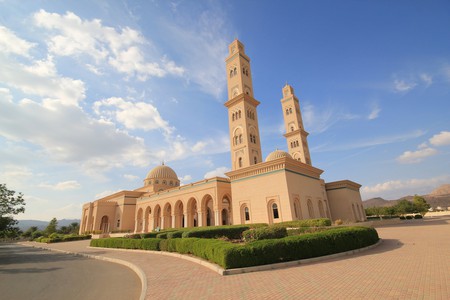 Regardless of what type of mosque it is, almost all mosques in Oman are characterized with the unique Islamic shapes and designs. Moreover, the special Omani heritage and styling is clear in the material used to build the mosques and in some of their designs and layout. The most beautiful in Oman are the Sultan Qaboos mosques which are built in different cities across the Sultanate, including: Nizwa, Muscat and Bahla. 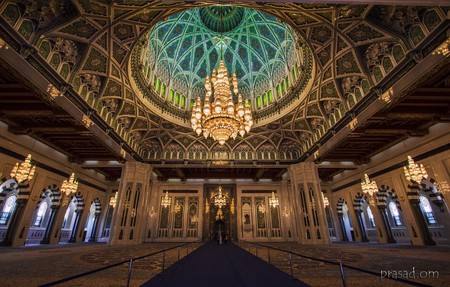 Most forts and castles around Oman have the same designs. They are distinguished with their various towers, hidden tunnels, dungeons, beautifully carved wooden doors and the uniquely rounded, squared or triangle-shaped walls. These forts and castles reflect the high level of architecture, engineering and military design of Omanis, as they used them to defend their cities in the past. Al Rustaq Castle, Nizwa Fort, Jabreen Fort are some examples of the best-known castles and forts in Oman. 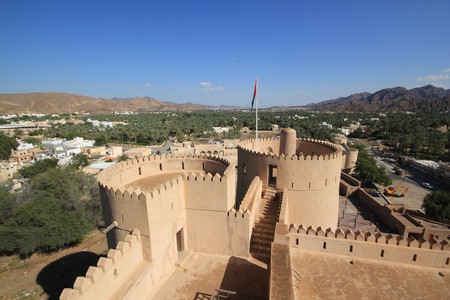 There are lots of unique towers in Oman, which are mostly clock towers and usually found in the streets’ roundabouts. They can also be found in the different castles and forts, and scattered above some mountains and hills. These towers mostly have Islamic shapes and designs, especially their tops which look like the domes of mosques. They differ in shape, length and width, but all have unique designs and architectural beauty like Al Sahwa Tower and Ruwi Clock Tower in the capital city Muscat. 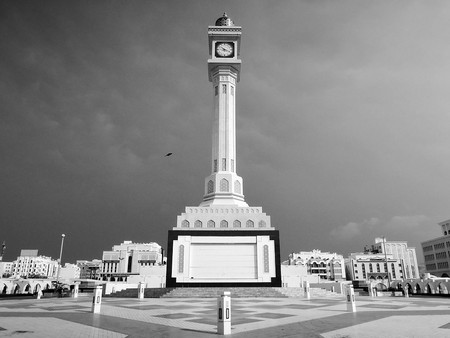 It is true that Oman has some internationally famous hotels like: Holiday Inn, Hilton and Sheraton, which almost have the same design around the globe. Nevertheless, there are other hotels which take a different unique design that reflects the Omani architecture. These cultural designs can be found in some traditional hotels like Sifawy Boutique Hotel in Muscat, Juweira Boutique Hotel in Dhofar and Alila Jabal Akhdar in Al Dhakhliya. They are also clearly represented in the guest houses in different cities around Oman, such as Nizwa Guest House. 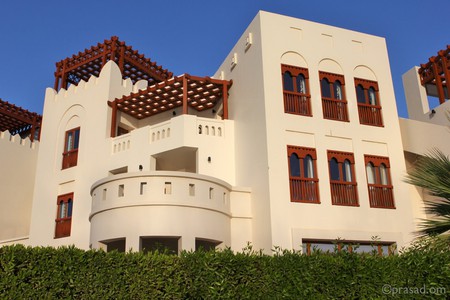 The architectural beauty in the hotels of Oman are also presented in the interior design and decorations. For example, many of these hotels and guest houses have the Arabian Majilis, which are several seatings that look like skinny mattresses that are put in the shape of a square or an L-shape for people to sit together. There are also the Islamic or Arabian-shaped chandeliers, the pottery and dallah (Arabian coffee pots) that decorate the interior. 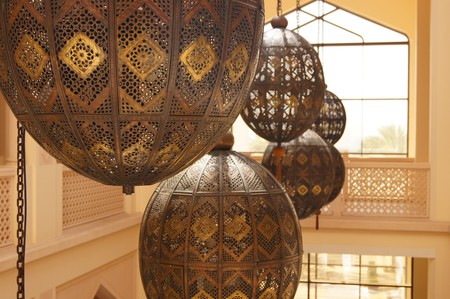 Many of the roundabouts in Oman are not simply paved circles, but hold statues that represent something famous or unique about that city. For example, Muscat is a coastal city and thus a lot of its roundabouts have statues of ships, Omani traditional boats, or even some fish fountains. Along with the cleanliness of the streets, Omanis design their roads, pavements and roundabouts to hold some of their architectural beauty. 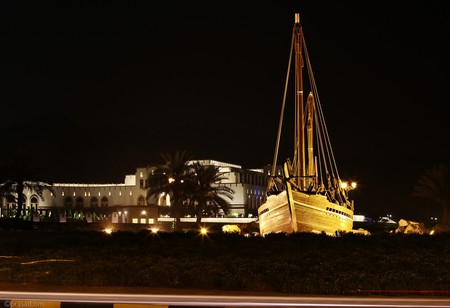 Nizwa is another example, in which Omanis built a roundabout that holds lots of books stacked on each other. That reflects the knowledge and rich culture of the city, considering its historical role of reserving Arabian science and being a city of educated people. 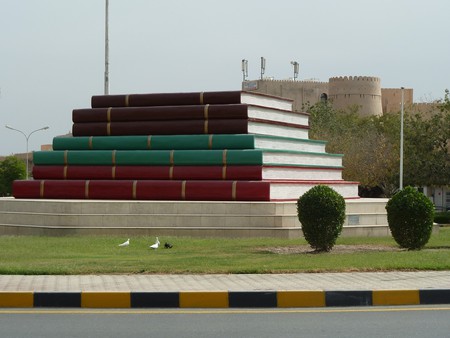 Piers in Oman are not merely pavements that lay next to a sea or an ocean. In Oman, piers are well-designed paths for people to walk on and enjoy the view of the sea, and their locally-made ships. Starting with street lights to the benches on the pier, all reflect the unique Omani architecture. 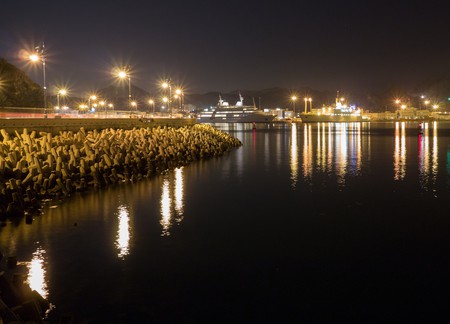 Omani traditional souqs don’t only reflect its culture through the products they sell, but also on the overall design of the place where they sell them. In Nizwa for example, the traditional souq of the city is inside its famous fort, and takes the same shape of its walls and decorations. Matrah Souq is another beautiful souq that must be visited even if a visitor won’t buy anything, but take pictures of its unique designs. 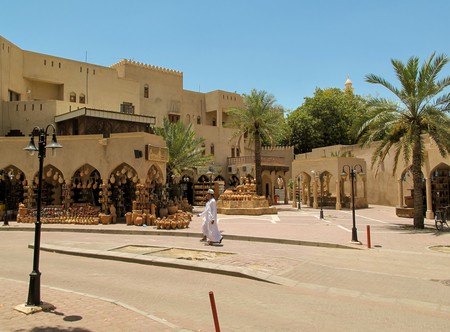 Oman’s Royal Opera House was built on the district of Shati Al Qurum (Al Qurum Beach) in Muscat in 2011 and is considered the main venue for musical arts and culture. The opera’s building is distinguished with Omani contemporary architecture that gives it the style of an Omani Palace. It was built using limestone and stucco that was locally-sourced. 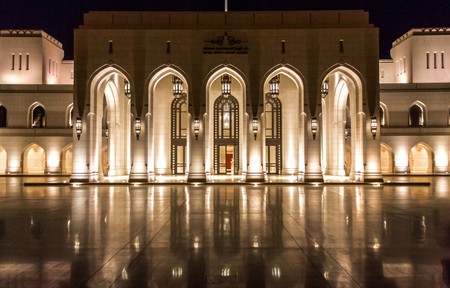 Forget about electronic gates and plain welcome signs that you see in the entrance of most cities around the world. Each city of Oman likes to welcome visitors warmly by showing its great architectural designs, which give them a flavor of how the city looks. Most city gates take the shape of ancient forts and castles and have carved wooden doors and stairways which visitors can climb to get a wider glimpse of the city. All of them reflect the considerable attention to detail and the precision in reflecting the Omani culture and heritage. 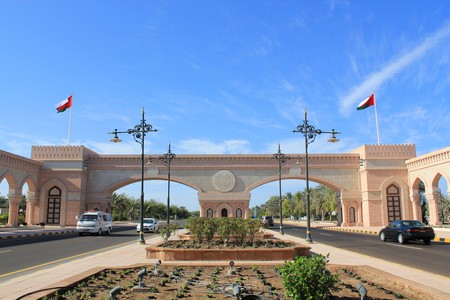 Sohar Gate By: Riyadh Al Balushi | Flickr
Give us feedback