The 10 Best Restaurants In Raouché, Beirut

No visit to Beirut is complete without a stroll along the sea side corniche in Raouché neighborhood. Tourists tend to flock to this commercial center, intent on taking a compulsory photograph of the impressive Pigeon Rocks and surrounding seascapes. Should you feel like a rest, numerous cliff-side cafés and restaurants are always happy to welcome new diners. Here’s a guide to some of the more popular places to grab a bite, or simply relax with a drink while taking in the beautiful views. 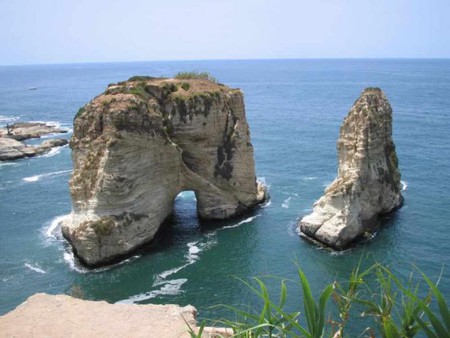 Overlooking stunning sea views you’d be hard pressed to find anywhere else in the city, Beit Ward specializes in both Lebanese and Mediterranean cuisines sitting all the way at the edge of Raouche. Meticulously decorated in a floral theme, and measured doses of pink adorning its white interior, this charming and spacious venue offers plenty of seating indoors and on its charming garden terrace. Open around the clock, it’s never too late, or too early, for a fine dining experience at Beit Ward.

Nothing spells out Raouché as clear as the famous Pigeon Rocks, and there is arguably no better way to enjoy them than at a table at this restaurant and café situated high above the cliff facing these iconic rock formations. Open since 1986, Bay Rock is a family favorite serving traditional food from all over the Middle East and a number of international dishes, mainly steaks and fresh salads, for more Western palates. It’s well worth asking for the Plat du Jour and equally worth considering Italian ice-cream and an assortment of homemade cakes for dessert. 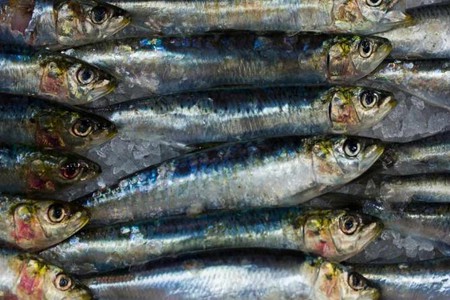 Restaurant, Seafood, Lebanese, Mediterranean
Facebook
Email
Twitter
Pinterest
Copy link
Share
Map View
An obvious reference point for locals when considering a seafood restaurant in Beirut, Feluka has been around for more than four decades, consistently offering an abundant variety of freshly caught fish prepared in the richest manner and true to Mediterranean culinary traditions. Situated at the Sporting Club on the Manara promenade, this restaurant welcomes guests with a display of fresh fish resting on a bed of ice, later to be served in a friendly and unfussy atmosphere, matched by the minimalist rustic decor of its interior and a panoramic view of the coastline.
Open In Google Maps
General De Gaulle, Bayrut, Beirut Governorate, Lebanon
+9611742200
Visit Website
Visit Facebook page
Give us feedback

Fayez (Fawzi) Elias Khoury founded the original Burj Al Hamam in 1958 and it quickly became one of the most reputable restaurants in the city. Today, another generation of the same family spreads its excellent culinary legacy across a number of venues within Lebanon and the wider region. This branch, located inside the Mövenpick Hotel, boasts an outdoor terrace overlooking Beirut’s Mediterranean coast and serves fresh fish, Lebanese grilled meat, and their signature speciality, a widely varied selection of Lebanese mezze.

Restaurant, Lebanese, Coffee, Mediterranean
Facebook
Email
Twitter
Pinterest
Copy link
Share
Map View
La Terrasse Dbaibo is only ten years short of its first centenary; established in 1926, it has witnessed much of Lebanon’s modern history, played host to political figures in the 40s, and falls nothing short of being a piece of history itself. Overlooking the Raouche Pigeon rocks, the outdoor terrace offers an oasis of tranquillity allowing you to briefly close off from the bustling city behind. The menu boasts a long list of Lebanese dishes served in an amiable, albeit alcohol free, environment.
Open In Google Maps
Beirut, Beirut Governorate, Lebanon
+9611860233
Visit Website
Give us feedback

Raouché’s sister restaurant to the popular Grand Café branch in Downtown is a safe bet. This family friendly locale tends to attract many tourists in search of a typical Lebanese meal, a game of backgammon, and enjoy some relaxing time with a traditional water pipe. The sea views do not hurt, either. 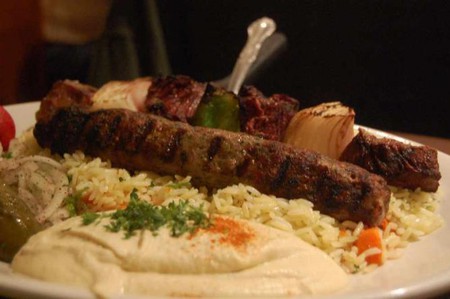 Restaurant, Lebanese
Facebook
Email
Twitter
Pinterest
Copy link
Share
Map View
Now in its second incarnation since it was first established in Downtown Beirut back in 1965, Abou Hassan is presently situated a couple of blocks away from the western end of Hamra Street. This small, no-frills, family run restaurant is held in particular high repute by regular locals for serving some of the tastiest and truly authentic Lebanese food including mezze and grilled meats, at very reasonable prices. Freshly baked bread is also prepared on the spot. Given that the place is probably unable to seat more than 20 people at a time, it is well worth booking in advance.
Open In Google Maps
Beirut, Beirut Governorate, Lebanon
+9611741725
Give us feedback 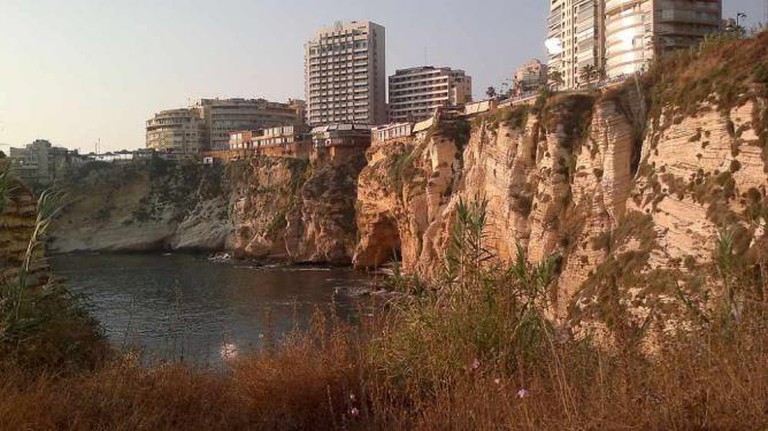 Cliff-side restaurants at Raoche | © Freedom's Falcon/WikiCommons
While it may not look like much on the outside, Al Dar packs in some surprises as soon as you walk in with a classical interior, reminiscent of a wedding hall. The place is managed as professionally as one would expect from a white table cloth restaurant; waiters are duly attentive, and the food offers a true immersion in Lebanese culture with an array of traditional home cooked dishes and background music from the universally loved Fairouz. Good value for money overall, especially in view of the high level of service given here.
Open In Google Maps
Beirut, Beirut Governorate, Lebanon
+9611867104
Give us feedback

Restaurant, Lebanese, Mediterranean
Facebook
Email
Twitter
Pinterest
Copy link
Share
Map View
Specializing in mashweh (grilled meat) and raw cuts, lots of freshly slaughtered lamb meat is brought to Lamb House numerous times per week. What the name tends to overlook however, is that this 24/7 restaurant also serves a wide array of fish dishes, including the curiously named Sultan Ibrahim fish. This place promises that nothing you eat here is frozen, and is as fresh as it’s possible to get.
Open In Google Maps
Beirut, Beirut Governorate, Lebanon
+9611741701
Give us feedback

Cafe, Restaurant, Coffee, Mediterranean, Lebanese
Facebook
Email
Twitter
Pinterest
Copy link
Share
Map View
Founded on a mission to provide high dining standards in Lebanon’s burgeoning tourist industry, the growth of Petit Café is testimony to a success story. Opening its doors in the late nineties on an enviable spot along Beirut’s corniche, the branch in Raouché was the first from what has now become a wide franchise spread across the Middle East and Gulf countries. A favorite with visitors from the latter region and somewhat pricey, the place serves an eclectic mix of items ranging from Italian staples to traditional Lebanese fare, and lots of hookah.
Open In Google Maps
Beirut, Beirut Governorate, Lebanon
+9611808017
Visit Website
Give us feedback
Give us feedback