The 10 Best Lebanese Product Designers You Should Know

Lebanese product designers are making names for themselves on the elite design scene for their high-quality, unique pieces that promote a union between traditional Middle Eastern culture and contemporary design. Culture Trip takes a look at the ten most impressive contemporary designers from Lebanon, and examines what makes their art so spectacular. 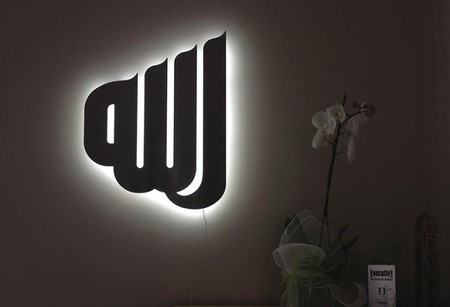 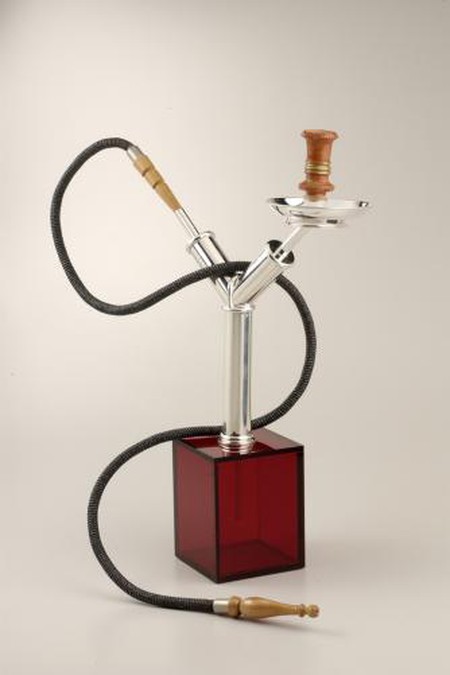 Atelier S/Z is the studio set up by husband and wife design team Ziad Abillama and Sibylle Tamer. Together, this creative couple produces a fresh take on well-loved objects in traditional Lebanese homes, from candlesticks, vases and teapots, to their striking modern adaptation of the shisha pipe. Unlike traditional shisha, their range, entitled, ‘Why-U…Y-Me,’ features clean lines, bold, industrial shapes, and unexpected materials such as nickel and Plexiglas. This modernist pipe functions in exactly the same way as a traditional pipe, and thus becomes a perfect marriage of the past and the contemporary, epitomizing the studio’s search to inspire modern design with Lebanese heritage.

To step into the Bokja showroom in Beirut’s Quartier des Arts is to step into a vivid explosion of beauty and colors. Founders Hoda Baroudi and Maria Hibri joined forces in 2000, combining their impressive collections of antique and modernist furniture and traditional, vintage fabrics from all over Europe and Asia. The result is stunning: A series of one-of-a-kind, handmade furniture pieces, arrayed in a patchwork of delicate embroidery and dazzling brocade and bold prints. Baroudi and Hibri collaborate with local artists and craftspeople to ensure the high, handcrafted quality of each piece, and to maintain the consciousness of Lebanese tradition and its dialogue with the modern world. Their unique vision has drawn the attention of designers and critiques from around the world, and their products have been featured in Harper’s Bazaar, Vogue Living and L’Officiel. 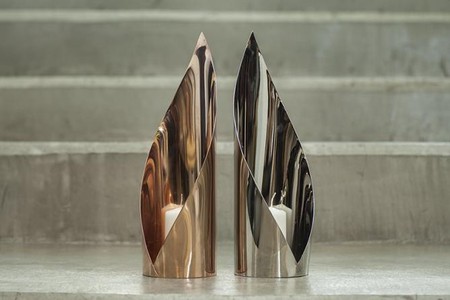 Of Armenian-Lebanese origin, Karen Chekerdjian studied and worked in Milan for several years, before returning to Lebanon in 2001 to set up her own design studio. The studio began as a place to experiment with new methods and theories of design, but it eventually evolved into a place where Chekerdjian produced furniture and bespoke items. Her work has been featured in some of the world’s largest design fairs, including Paris’ Furniture Fair and New York’s ICFF, and in a range of publications ranging from Marie-Claire to L’Officiel Levant. Chekerdjian’s work merges a contemporary industrial aesthetic with the traditional crafts and materials of Lebanon. After returning to Beruit, Chekerdjian realized many of the manufacturing methods and materials she had relied on were not available, and began to create a new, handcrafted form of industrial design.

Carlo Massoud‘s products tread the line between object and art, and between function and creativity. In one concept, Massoud plays with the phrase ‘in the closet’ by treating the wardrobe as a space for hidden, socially subversive desires. His series of coat hangers, each covered with leather, lace, studs and small condom pockets, fetishize practical day-to-day objects. Another work titled, Maya, Zeina, Racha and Yara, Massoud depicts four types of the female Islamic veil through a series of minimalist dolls made from black wood, each hollow inside to allow small objects to be stored. Here Massoud is urging the user to reflect on the inner beauty and identity of Lebanese and Middle Eastern women. Massoud has earned great recognition for his socially engaged product designs, which have been exhibited in the Carwan Gallery and the Beirut Art Center. 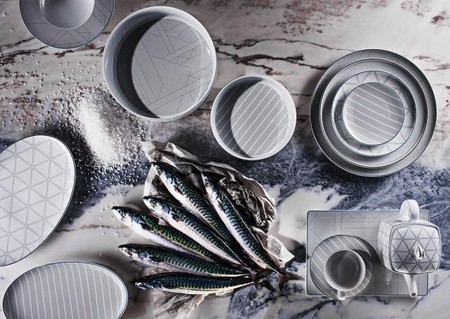 Both David Raffoul and Nicolas Moussallem studied at the Academie Libanaise des Beaux Arts in Beirut, and then at the Scuola Politecnica Di Design in Milan. The design aesthetic of David/Nicolas is therefore incredibly representative of this broad, global background. In one piece, a distinctly contemporary European cuckoo clock is built from Lebanese cedar wood, in another, industrial influence meets a dining table specially designed for a ‘typical Lebanese house in the heart of Beirut.’ Their pieces are often fiendishly clever yet simple in design, and seek to reinterpret classic concepts such as bookshelves or clocks. The duo was selected among the three breakout stars of Milan Design Week 2013 by The New York Times. 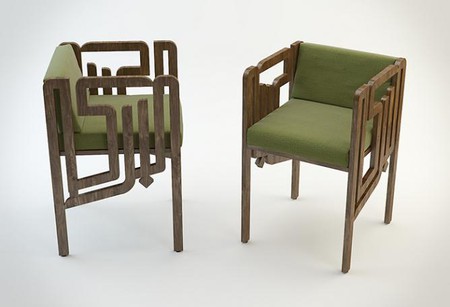 Founded in 2011 by Mirna Hamady and Elie Abou Jamra, Kashida has already become one of the biggest names in contemporary Lebanese product design. The studio has a strikingly unique aesthetic, using 3D Arabic calligraphy as inspiration for the design of furniture and home accessories. Kashida in Arabic denotes the elongated glyph, which joins two letters in a word. Stunning highlights from the collection include the Couples Name Tray, featuring a name on either side to be used as handles, and the limited edition Baraka armchairs, with the Arabic word for ‘blessing,’ carved out of walnut wood and creating the arms of the chair. The studio’s aim is to embrace Middle Eastern culture as a source for contemporary design, and to create unique pieces that reflect and celebrate modern Lebanon. 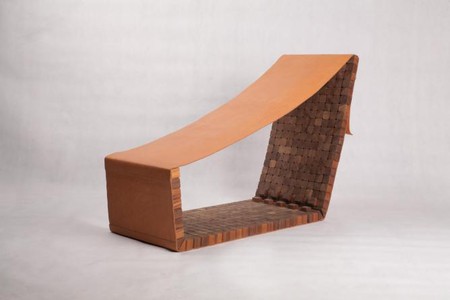 Marc Baroud‘s design experience ranges from product design; he studied interior architecture and furniture design at the Academie Libanaise des Beaux Arts, and is now head of the design school. He co-founded RGMB-ad, an architecture and design firm that works with both individual and corporate clients. His design philosophy is largely experimental and innovative, working closely with combinations of materials to create new conceptual designs. His recent Tessera project consists of small pieces of wood that are bound together by leather and shaped into furniture, creating structure out of something that is seemingly disparate and fragile. His work has been exhibited at the Carwan Gallery, Beirut Art Center, Art Factum Gallery, MiArt and Milan Design Week, and more. 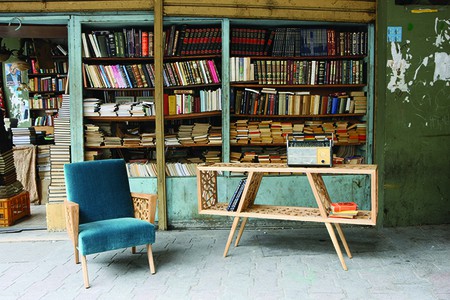 Though Lebanese in origin, Nada Debs had a multi-cultural upbringing, spending her childhood in Japan, and later studying at the Rhode Island School of Design in the United States. Her work reveals her personal cultural diversity, particularly her main collections East and East and Contemporary. While the former focuses on a fusion between Middle Eastern and Far Eastern aesthetics, combining the intricate designs of Arabesque patterns with the minimalist feel of modern Japanese forms; the latter allows Western focus on form and function to influence Middle Eastern designs. The result is a beautiful range of high quality, unusual products that are sold in countries throughout the world.

Najla El Zein has been acknowledged throughout the world as a leader in contemporary Middle Eastern design. Her work has been featured in publications ranging from Le Monde to Wallpaper* Magazine, and she was selected as a featured designer in 2010 by the Starch Foundation, an organization that promotes emerging Lebanese designers. El Zein’s work borders on contemporary art installation. In one piece, El Zein created a seemingly soft, fur scarf out of thousands of sharp toothpicks; the piece, titled Sitt el Sitteit, emphasizes the contrast between external appearances and true natures. In another piece commissioned by London’s V&A museum, thousands of small paper windmills hang in a doorway, exaggerating the sensory experience of wind and sound as people pass through. 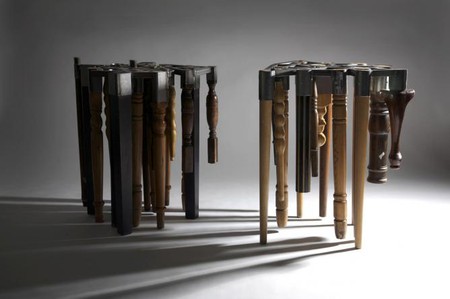 Niloufar Afnan‘s design philosophy centers around the principles of reusing and recycling. While studying furniture design at London’s Central Saint Martin’s, she began to question the preconceived ideas people have of an object’s function by paying sole attention to its form. Afnan sought to challenge people’s perceptions by creating furniture out of unexpected and reused objects, giving them new life and a new purpose. Her table ‘46,’ is made from 46 assorted table legs found across London and held together in a metal, maze-like structure. By transgressing the norms of functionality, Afnan demonstrates a new form of creativity in product design.

Anahit Behrooz is a 23-year-old literature graduate from Oxford and St Andrews, obsessed with Hitchcock, lace dresses, Alice in Wonderland, and finding the art in life’s littlest moments. She currently divides her time between writing, preparing for her PhD, and finding the perfect burger restaurant. Find her on her blog, Tumblr or Twitter.