Sounds From The Golden Age: A Musical Exploration Of Beirut’s Cinematic Peak

The period from the late 1950s to the mid-1970s is considered the ‘Golden Age’ of Lebanese cinema, and is often referred to nostalgically within Lebanon. This is evident in the surfeit of regular retrospectives devoted to the period and in the likes of the band Safar Barlik, who take their name from a famous film of the late 1960s. In this piece from ReOrient, Arie Amaya-Akkermans investigates this revival of interest in the ‘Golden Age’ of Lebanese cinema.

The year is 1914, and the setting is a village in Lebanon under Ottoman rule, where the Empire has enslaved scores of Lebanese men. Abdou, the film’s protagonist, goes to get his fiancée, Adla (played by the legendary Fairouz), an engagement ring, but he is arrested along with others and forced into labour. In the meantime, the Ottomans prevent wheat from arriving to the village in order to curb the ongoing local resistance, and Adla travels to where – as rumour has it – Abdou is held captive. Along with the other villagers, Adla helps the resistance provide wheat to the people, and when they accomplish their mission – as well as liberate Abdou and the others – they then have to run for their lives, with there now being a bounty on their heads. Yet, despite all this, they promise to return to the village, and continue fighting.

Such is the synopsis of Safar Barlik (‘The Exile’), a 1967 musical drama by Egyptian director Henry Bakarat. One poignant scene in the film depicts a sham wedding, organised by the villagers to distract the Ottoman Turks as they smuggle the wheat needed to prepare their bread; a moment during which Adla sings Douwara Al Douwara, a song written by the Rahbani Brothers and performed by Fairouz, adapted to fit the context of the Lebanese folk dance known as Dabkeh, commonplace at local weddings. Though the times are tough, and the wedding is but a facade, we nonetheless see Fairouz and the villagers dancing and rejoicing – if only for a short while.

When the present fails to deliver on its promises, the Lebanese – like the villagers in the film – seek an escape from the obstacles of reality, and often find it in films from the ‘Golden Age’ of Beirut (1958 – 1975), an era which is a source of both inspiration and consolation. That is how many viewed the 11-film retrospective, The Most Beautiful Days of My Life, that screened between June 13–22, 2012, at the Metropolis Cinema-Sofil in Beirut, and featured a variety of Lebanese-Egyptian co-productions, as well as Egyptian films made in Lebanon. With the nationalisation policy imposed by the Nasser regime, a significant portion of the Egyptian film industry relocated to the then-glamorous Lebanon.

Speaking about the selection of films at the festival, film producer and Arab cinema connoisseur Antoine Khalife remarked that: ‘Most of the films we selected reflect how the Lebanese wanted to represent their country in the 1960s. When I talk about the 60s, the Lebanese say, ‘Lebanon was amazing, so beautiful’. The Lebanese wanted to highlight the exciting things in their country. They didn’t want to deal with all their problems. They wanted to show the dolce vita, if you will.’

Although the 11 films chosen by filmmaker and artist Joana Hadjithomas and Antoine Khalife included two films by Bakarat, namely The Melody of My Life (1975) and The Most Beautiful Days of My Life (1974), Safar Barlik did not make it to the shortlist.

Nevertheless, the film has recently made a timely comeback to Beirut, not through film, but rather in the recently released album, EP by Safar Barlik, a new nostalgic Lebanese musical project. As the booklet to the album notes, ‘With a longing for an idealized pre-war Beirut, Safar Barlik explores the feelings towards the city and its long lost Golden Age’. The project remains somewhat mysterious, featuring a strange blend of sounds, from those of Arab electro-pop, Indie, and Ambient, to echoes from French New Wave cinema. The lyrics in both Arabic and French are soft, yet melancholy, repetitive, at times poetic, and at others reminiscent of nurseries and whispered lullabies.

Arie Amaya-Akkermans recently got together with the man behind the music to discuss his project, as well as the alternative music scene in Lebanon, and the obstacles faced by artists therein.

Safar Barlik is a project by a person with a longing for an idealised past – the Golden Age of Beirut.

In what ways were you inspired by Henry Barakat’s film of the same name?

Fairouz, the Rahbani Brothers, and the epic-ness and grandeur of the film were all inspirations for me. Safar Barlik can also be viewed a symbol of prosperity – a time when such movies could be made. It has a lot of room for interpretation, and feels very relevant to my aims.

There are a lot of different sounds coming together in this album – what, and who are your influences?

We are living in a hyper-oversaturated digital age, where different genres of music and movies are becoming more and more accessible, and we therefore try to pursue, discover, and fine-tune our tastes, and break out of the once-upon-a-time era of radio and television. Of course, as a result of this, our already-multilayered identities can become even more complex and overwhelming, to the point that we develop a yearning for different genres to fulfill our newly-developed needs. As such, the sounds on this album come together in the pursuit of those needs. Some inspirations of mine are more direct than others and there are many to list, but – in no specific order – I can name the Rahbani Brothers, Fairouz, Mashrou’ Leila, Soap Kills, Ariel Pink, John Maus, Maria Minerva, Joy Division, New Order, The Smiths, Daft Punk, Synth-pop and New Wave music, some Kitsuné music, and French New Wave cinema as some influences.

Many artists in Lebanon release albums with their own resources and under their own labels – particularly through the highly popular website, Pirate Beirut. Is the album self-released?

Yes, thanks to the many sharing platforms such as Facebook, Bandcamp and most importantly, Pirate Beirut.

There’s constant talk among the art crowd about Lebanese artists being ‘prisoners’ of either romantic, idealised images of pre-war Beirut, or war scenes. Safar Barlik, as you mention, deals with the ‘long lost Golden Age’, and a ‘longing for an idealised pre-war Beirut’. However, it seems the album deals more with a relationship to the past, rather than the past itself. What are your thoughts regarding this?

There’s a relationship to Beirut’s past, because I never lived during that time. All that remains of Golden Age Beirut are pictures, stories, and buildings. The album is an exploration of the notion of that idealised past, and its relationship with the present. In some ways, I feel it is a response to our current chaotic times, and in others, that is a sort of ‘escape’. However, bringing back the past is not unique to the Lebanese, and it certainly isn’t just a current trend. Throughout history, a lot of different movements – whether they were cultural or not – passed through episodes where there were indirect inspirations from, and revivals of the past.

The Golden Age of Beirut is a period most of us did not live through, and somehow we’ve come to experience it only through the lens of what occurred thereafter, such as the wars and the endless unrest. When dealing with this period as an artist or writer, does one agree that the memory is already distorted? Are there other ways to approach the subject?

Had we been able to live in that period, our perceptions of how it was could have also been different, depending on the lives we would have led. Especially as time goes on, people will tell different stories about that era, and our perception of how it really was will always be distorted.

Pas Pour Moi is a very interesting track on the album, as it seems to stand out both musically and conceptually from the rest of the songs. It doesn’t seem too melancholy as it does hazy, hypnotising, and whimsical – can you tell us a bit about the number?

Pas Pour Moi was an attempt to come to terms with the idea that some things, people, situations, and places are not made for each other, or rather, cannot function with each other. However, they still share something, whether it’s ephemeral or not, positive or negative, or in between. The lyrics were inspired by the type of dialogues you would hear in the films of Jean-Luc Goddard and the directors of French New Wave films.

Since the 1990s, there seems to have been a lot happening in the alternative music scene in Lebanon, with the rise of such musicians as Zeid Hamdan, Marc Codsi, Mashrou’ Leila, and others. Where is Safar Barlik’s place in this thriving scene of independent music in Beirut?

Only time will tell how Safar Barlik will relate to the ‘bigger picture’. I have a lot of respect for the constant struggles that artists in the Lebanese music scene go through in order to contribute to their own cultural heritage. Besides the financial struggles, there are other barriers, too, such as the risk of imprisonment. In some ways, I feel these artists are too developed and open-minded (in a positive and avant-garde way) for a Government in constant regression. One could argue that there are more ‘important’ issues that the Government should be taking care of. We could also get into long discussions about the benefits of Government support, but let’s stop at that – we’re still implementing these ‘tests of shame’. It saddens me. Nonetheless, despite all the struggles, these artists never cease to amaze me. 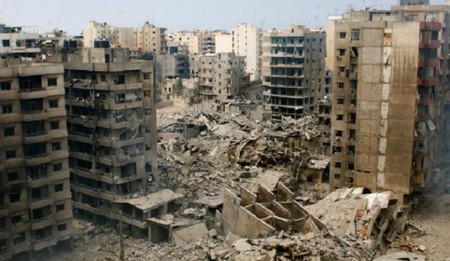 Lebanon’s Haret Hreik district in 2006, during the Israeli conflict

Your album was only recently released – what’s next for Safar Barlik? Will there be any gigs? What other projects will you be working on?

There will be more to come very soon – but that’s all I can say for now.

Safar Barlik’s ‘EP’ is an exquisite musical journey from 2012 to 1967, and from there to 1914 and back again to 2012 – dates that are not to be taken lightly. In 1914, the Ottoman Empire was near its demise, and 1967 would not only signal the rising tensions in Lebanon that eventually deteriorated into the Civil War (1975 – 1990), but a crucial moment of transformation and disenchantment in Arab and Lebanese history, about which the artist Joana Hadjithomas notes:

‘I don’t think that we are any more modern today than, say, back then [the Golden Age]. I think we had a different perception of ourselves; and those perceptions changed a lot after the defeat of 1967 – during the war between the Arab states and Israel – and for many people of our parents’ generation, this was a traumatic moment in which we inherited a moment of disenchantment. We saw that Pan-Arabism and the Pan-Arabic dream had faded.’

However, this ‘journey’doesn’t necessarily have to be regarded as either a dirge or a celebration, but perhaps rather a moment of acute reflection. In his historical book, Beirut, Samir Kassir remarks:

‘The temptation was great to speak of the city under siege, and of the ways in which it adapted to the catastrophe. But to have given in to that temptation would have distorted my fundamental purpose in writing this book, which as the history of a city must be a tale of civility – even if this remains to be reinvented – and not a tale of its death.’

This is precisely what one hears listening to Safar Barlik – a tale of civility and reinvention – not one of death.