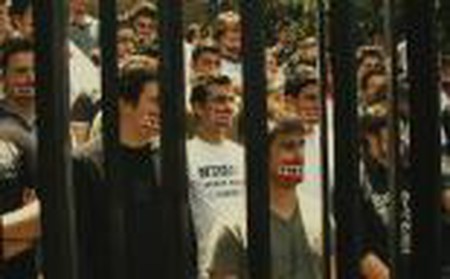 Lebanon’s Rue Huvelin offers a vital document of the student led protests against the Syrian Occupation of Lebanon. Filmed in a documentary style and with a cast of amateurs, the film attempts to get to the heart of a movement which foreshadowed the Arab Spring.

Rue Huvelin is a landmark street in Beirut and is the location of the French language ‘Université St. Joseph’; it is also a hotbed of student activism and has been for the past several decades, as the film of the same name reveals. The film was directed by Mounir Massari, a veteran of Lebanese cinema. Massari grew up in Lebanon, before travelling to the United States to take part in the flourishing performing arts scene in New York. He soon joined the Senior Dramatic Workshop, and studied under the famous teacher Lee Strasberg from 1960 to 1962.

Rue Huvelin was made in 2011 and depicts the popular opposition to the Syrian occupation of Lebanon in the early years of the 1990s. In revealing the inner workings of a student-driven popular protest movement, the film hints at what may have occurred in the Arab Spring, in similar movements in Egypt, Libya and Tunisia. The students that took part in the resistance set the way for a new revolutionary force, and the film is reflective not only of the heightened sense of excitement and tension of this but it also shows the inevitably dramatic lives of the students themselves. Through using real life footage of some of the events and predominantly amateur actors, the film maintains a raw ambiance whilst aiming to give a detailed and accurate depiction of the student movement.

The film is both a historic representation of this important political movement, and an excellently crafted work of cinema. Rue Huvelin serves as evidence of the strength of the Lebanese film industry, which despite the small size of the country and the relative lack of funding, has thrived over recent years and is one of the few in the Middle East that can lay claim to being a national cinema. Films such as Under the Bombs (2007), Caramel (2007) and Where Do We Go Now? (2011) show the strength and variety of Lebanon’s cinema and the way it is prospering despite the uncertainty in the region.