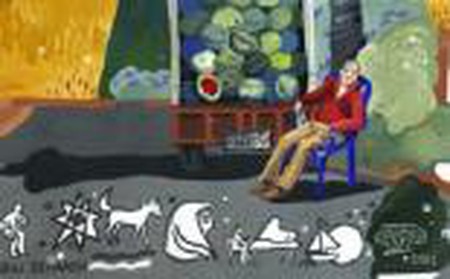 Lebanese art often refers to the long and painful Civil War, which split the country for so long, and international perceptions of Lebanese artists are also dominated by the legacy of violence. In this piece from ReOrient, Arie Amaya-Akkermans looks at Lebanese painter Mouna Bassili Sehnaoui and how she interprets her country’s history of conflict in her work. 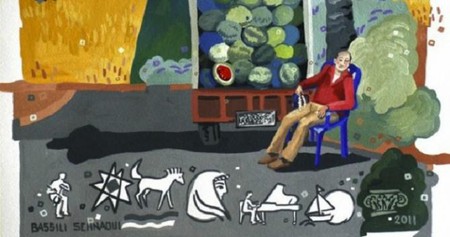 Any discussion about contemporary Lebanese art is inescapably fraught with questions about the Civil War and the ongoing regional conflicts that more often than not find a buffer zone in Lebanon. All of this has led to the assumption that the prism of war – or the denial of it thereof – is the sole identity of Lebanese art; and, as is the case with the Arab ‘Spring’, collectors and buyers in the West tend to have preconceived expectations that glorify the images of war when it comes to Lebanon.

In speaking about this fascination on the part of Western collectors, Lebanese artist Bernard Khoury notes that local artists are ‘prisoners of war’ – or at least, of the depictions they make of it. In his opinion, Lebanese artists are either trapped in the romantic images of Lebanon during the years between its independence in 1943 and the Civil War in 1975, or are portraying Lebanon exclusively through the prism of war. His luminous fresco, Catherine Wants to Know (2009), which mixes images from other contemporary artists depicting both views of an idyllic pre-war Lebanon and of war-torn Beirut, reflects on this practice.

There is no doubt that Khoury is reflecting on certain trends and practices, and obviously on the demands and expectations of the market for Middle Eastern art in general. However, there is more than meets the eye. At the recent edition of the Beirut Art Fair (2012), no fewer than twenty galleries represented the Lebanese art scene; and, while images of war occupy an undeniable place of their own, they by no means account for all the subjects explored in Lebanese art. In a country comprised of many different communities and influences, it can hardly be said that there are any ‘common’ themes or styles.

The works of Lebanese painter Mouna Bassili Sehnaoui are illuminating in this respect, if only because of how they belong in the Lebanese context, yet remain altogether very unique and contemporary. Sehnaoui was born in Cavafy’s Alexandria, and began her classical training in painting at an Italian academy, followed by a period at the American University of Beirut, and later at the University of Arizona in Tucson. Like most artists of her generation, her training in art was very formal, and fully embedded in the Western perspective. 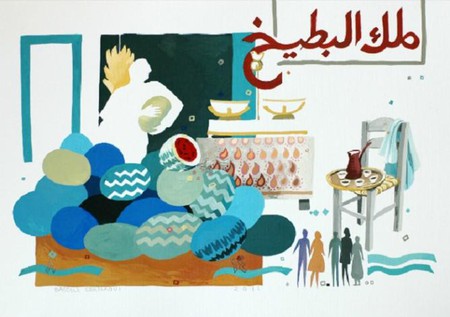 After returning to Beirut, Sehnaoui took a long intermission to place herself at a distance from the path of isolation and ennui that Western art had taken – a dominant trend among Lebanese painters. However, Sehnaoui’s ‘comeback’ wasn’t necessarily a restoration of traditional Arab or Islamic art, as much as it was an exploration that led her to develop a particular style from scratch, drawing on the particular traditions and iconography of the Middle East.

Although Sehnaoui’s style is figurative (a dominant trend in Lebanese art), a whole world of Middle Eastern imagery, indigenous not only to traditional Lebanese landscapes and images of old Beirut, but also to other lands such as Oman, Syria, Jordan, Yemen and Abu Dhabi, surfaces in her art. Images from Phoenician mythology, Byzantine icons, Persian miniatures, birds from ancient frescos, and Arabic calligraphy painted in pastel quarter tones appear in oils, watercolors and gouaches.

How does Sehnaoui’s work relate to the aforementioned images of war? Contrary to the thesis expounded by Khoury, her paintings do not depict nostalgic images of Beirut (the colours, contrasts, and especially the cartoon-like handling of space are profoundly contemporary), and do not represent a constant bombardment of war images. Paintings of war are not common in Sehnaoui’s exhibits and catalogues, and she herself mentions that she rarely shows or sells such paintings (although she has considered including them in a book).

One relatively recent work of Sehnaoui’s, an installation entitled After Two Months … (2008) was exhibited in the American University Museum at the Katzen Arts Center in Washington, D.C., in an exhibition of contemporary Lebanese art held in the spring of 2010. Installations are perhaps the most difficult and ambitious among all the contemporary art forms, due to the fact they use the content of the artwork as a kind of quotation – to paraphrase the Hungarian philosopher Agnes Heller – in the medium in which the work is produced to provide a message external to it. 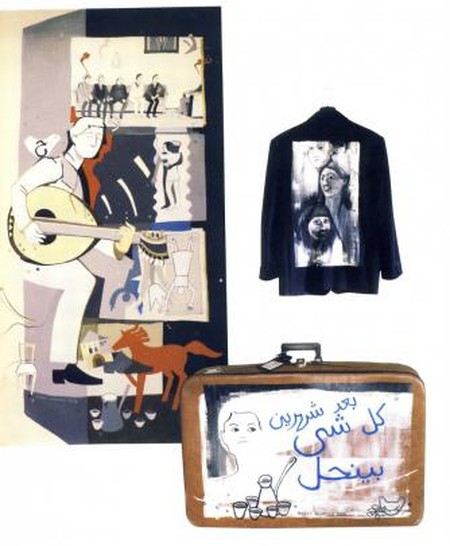 After Two Months … differs from traditional installations (i.e. ones which cease to exist as art once an exhibition finishes) in the sense that each of its three components – the painting Days of Antar (2008), The Widows (a jacket) and The Suitcase (a mixed media piece) – are works of art in their own right, and its accompanying text opens the vaults of memory. ‘We carry a linear past within us. Our present opens up windows and different time spaces that interact with the music of our lives’, Sehnaoui posits.
With respect to Days of Antar, the painting in the installation, Sehnaoui states that:

‘The painting expresses the hope that war (with its string of horrors, death, destruction, futility, lovers, and vile politicians) is only to be part of the past, and related by singers and poets like the exploits of Antar – the father of Arab chivalry … not to be suffered again.’

Furthermore, the artist’s accompanying text for the exhibition completes the thought. ‘As the troubadour sings of things passed, he prays that indeed all the windows are just windows of the past, and that they should be a memory to remind us not to go down that path again’.

The other two parts of the installation also tell their own stories. The text next to the mixed media piece, The Suitcase, reads: ‘How many times have we heard and repeated the phrase, ‘after two months all will be well?’ Thus, in the middle of planning, to leave or not to leave?’ This recalls an older painting of hers, Sneaker Generation (1989), and makes an explicit allusion to the fact that the Lebanese lived for so long with their possessions and lives rolled up, waiting for the Civil War to end.

The final piece, The Widows, relates the sorrows shared by many Lebanese women. Beside the jacket, the accompanying text reads:

‘The tragic role of young widows is to clear away the remnants of their dead husbands. Long after someone dies, his particular odours remain on the clothes in his closet. After the death of their loved ones, women from all communities are brought together in the same gut-rending sorrow.’ 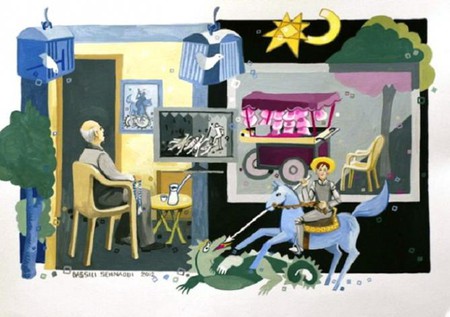 A Moment of Eternity Flying from History

These are not images of war being depicted, but rather suggestions, clues, and meditations. ‘I often put references to what went on over those years in my paintings, notably so that people don’t forget them and make the same mistakes’, she notes. Moreover, as Sehnaoui says regarding the years during the Civil War (1975 – 1990):

‘Were we aware over the terrible years of war, which I refuse to refer to as a Civil War (but that is another story), that this state of affairs would go on for so long? No. I don’t think we could have survived if we knew how long it would last. There were periods of peace that lulled us into believing that things would improve (we are eternal optimists), and there were moments of foreboding when one’s insides churned.’

Today, artists in Lebanon have resorted to different media to express the hopes of the post-war generation, going beyond the usual clichés of nostalgia or war. Together with the work of Mouna Bassili Sehnaoui, one could consider, for example, the album Golden Beirut – New Sounds from Lebanon, including music from some rather well known names in the Lebanese post-war underground scene such as Scrambled Eggs, The New Government, Mashrou Leila and Soap Kills.

Furthermore, two films by Joana Hadjithomas and Khalil Joreige, A Perfect Day (2005) and Je Veux Voir (2008), or more recently, Samer Daboul’s Out Loud (2011) are also great examples of the ways in which Lebanese artists are expressing the sentiments of the new generation. All these works fill a gap in collective Lebanese memory, the dynamics of which are twofold: at the same time that remembering is an important part of reconciliation, forgetting – or more precisely, selective amnesia – is also an important aspect of rebuilding and moving on. However, the work of Mouna Bassili Sehnaoui does not simply stop there; rather, it moves in many directions at the same time. It is contemporary, with a broad outlook that is at once Arab, Lebanese, Mediterranean, and modern.