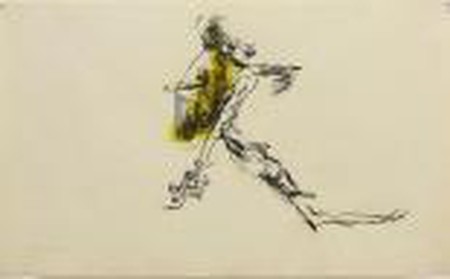 Born shortly before the outbreak of civil war in Lebanon, artist Shawki Yousef creates figurative paintings of human figures as a way of exploring the rare intimate moments that still exist during the horrors of conflict, as Arie Amaya-Akkermans discovers. 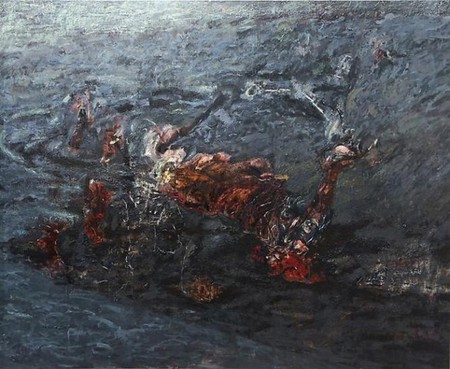 ‘The flesh is at the heart of the world.’ – Maurice Merleau-Ponty

The most astute metaphysical transgression of the last century was bodily rather than spiritual. Here begins the journey, still unfinished, of one of the greatest paradoxes: The body as a metaphysical unit. But there are no units in metaphysics; it is an indivisible whole out of which existing is distilled through a sifter of unchangeable essences that predate chemistry. Yet life is not an unchangeable fix, and it is subject to cosmic contingency. Things might come into being, they might as well not. Gillian Rose’s term for this is ‘dialectical damage’: ‘They may be merciful and they may be merciless.’ The body is our first experience of the world, and the movement of the limbs of a newborn is the first step into the most basic experience of freedom: movement, change, transformation.

Merleau-Ponty writes in his Phenomenology of Perception, ‘The body is our general medium for having a world’, setting himself and us up for an unprecedented change in our relationship to optics. The old contention that the body is the prison of the soul, rooted in Plato and preached through generations of Christian saints and martyrdom, came to a curious halt with the beginning of the sexual revolutions – coinciding with the era of bio-politics and many armed conflicts all over the world – when the body, ceased from being a second-rate aggregate of sensory organs and took to centre stage as the ‘medium’ of experience, unmolested by the tyranny – and distance – of the mind.

The appearance of the body as medium rather than instrument dealt a deadly blow to Kant’s distinction between knowing the world and having a world. In the traditional Cartesian sense, the senses are part of the process of thinking; perception is based on reason. In the course of an elaborate discussion about torture, Michel Foucault writes, ‘The soul is the effect and instrument of a political anatomy; the soul is the prison of the body.’ The Christian veils disappear from the trinity of mind-soul-body and the soul appears here as a construction. The reversal of metaphysics, however, is not anti-metaphysics, but simply that, a reversal of the order. Placing the body atop the soul, simply changes the means of satisfaction, but the results remain externalized.

The history of painting has not been immune to the perspectival changes that arrived with embodiment. Foucault speaks about the disappearance of the pictorial space already in Manet: ‘He [Manet] made a representational play of the fundamental material elements of the canvas. He was therefore inventing, if you like, the ‘picture object’, the ‘painting object’, and this no doubt was the fundamental condition, so that finally one day we could get rid of representation itself, and allows space to play with its pure and simple properties, its material properties.’ The optic illusion of three-dimensionality was achieved on a two-dimensional surface by a regular light source from within the canvas, prevalent since the Italian Quattrocento.

In this tradition, a monocular perspective made the human eye the center of the painting, and one then spoke of painting ideas, painting subjects, painting themes rather than paintings. The advent of photography and the moving image – still unacknowledged – decentered the focus of the pictorial space into a more elementary operation: Frames, stills, movements. Susan Sontag speaks about the influence of photography on paintings:’Off-centering: Main subject is in a corner. Figures in motion: Previously, all figures are either at rest or at the end of a motion. Understanding of focus: Eye can’t see focusing since it does so automatically, it’s a function of attention.’ The controlled accident becomes part of the grammar of the painted body. 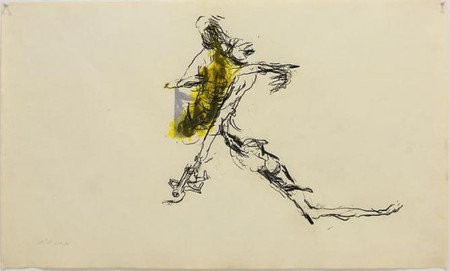 This is the body that what we find in the work of Lebanese painter Shawki Yousef, and his recent exhibition Acid Fields held at Green Art Gallery, Dubai, in 2013. Yousef’s paintings – completed by works on paper – are deployed as a field exploration into the internal dynamics of becoming, which is the natural state of living creatures finding joy in a saturated world fueled by terror and war as mass media spectacles, in which moral judgments are a linguistic charade rather than a position of responsibility. This world remains absconded from the internal focus and what is left on the visual field is the immediacy of how bodies experiment the shifting sands of reality without the intermediation of a code of aesthetics or an architectural silhouette.

At times, Yousef’s interventions resemble the happenings involving body painting out of which performance art was born but without the ephemeral clarity. The bodies are here inscribed rather than painted and the surfaces appear to reveal raw materials re-collected from the debris of visual memory, rather than a mapping of submerged anatomies. The shadows of skulls in motion and mutation that we find in earlier works from 2011 and 2012, recede now into almost pointillist close-ups of the collective memory of the Levant. An impressionist texture reveals flesh in the raw, tactile and sonic: The smell of wounds, warm blood, the bristling sounds of love, the freezing announcement of war; all intersected by the sterile pulsations of the everyday.

The painter, born in Lebanon two years before the Civil War, has developed an acute descriptive language of the syntax of war. Most Lebanese painters of that generation have chosen either the approach of portraying an idyllic republican Lebanon, with a melancholy over a country in which they never lived – and in which it is not certain that anyone lived – or became documentary portraitists of the horrors of war, almost obsessed. Yousef’s syntax, centered on the human body, recreates intimate moments, fragile, imperceptible, eroded. There’s almost a sense of the photographic in his work. All images of war are blurred, out of focus, veiled, overexposed. The off-centeredness reverberates without bright light, while still allowing for elements to circulate.

In spite of the smothered surfaces, Shawki Yousef’s depictions are visceral and confrontational. Yet a comparison with the emotional violence of Bacon is not necessarily accurate: Yousef’s understanding of images and especially of the figure of the body, is the realization that the figurative order no longer succeeds in capturing the texture of conflict, even in the most basic documentary format. The basic geometric forms are already deconstructed at the level of sensorial experience and hence, not available to the order of representation. The final destination is not death neither redemption, but a suspended state in which all things can exist independently of the force exerted upon them and are only dependent on the risk inherent to life as an objective condition. 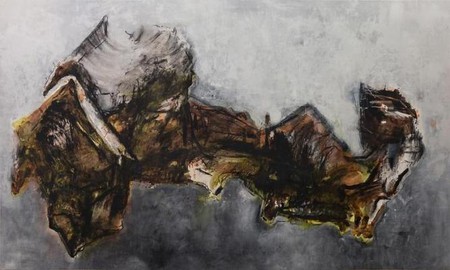 Julia Kristeva writes in The Powers of Horror: ‘A wound with blood and pus, or the sickly, acrid smell of sweat, of decay, does not signify death. In the presence of signified death – a flat encephalograph, for instance – I would understand, react, or accept. No, as in true theatre, without makeup or masks, refuse and corpses show me what I permanently thrust aside in order to live. These body fluids, this defilement, this shit are what life withstands, hardly and with difficulty, on the part of death. There, I am at the border of my condition as a living being.’ The mutilations and disembodied limbs are not a signifier to themselves or even a sign; they are a marker of our own experiences. Marking a place where no hopes, but only unadulterated truth can exist.

Yet this is a place of rejection, of abjection, of horror, of perplexity. Our bodies could not withstand this for more than five seconds in their current morphology. But this rejection is not real; it simply constitutes itself as a frontier in order that I will not disappear as an objective individual. An ambiguity between me and the rawest desires remains, a non-descript interspace, an always becoming recognition: ‘Abjection is above all ambiguity. Because, while releasing a hold, it does not radically cut off the subject from what threatens it – on the contrary, abjection acknowledges it to be in perpetual danger.’ Not in vain scripture warns against the terror inherent to seeing God right in the face. We need constant protection from the absoluteness of the experience.

Yousef’s paintings disclose themselves as a threshold. The effacement of a possibility: What would our bodies look like if we externalized pain, suffering, horror? Are we willing to live deformed? But yet the cold facts are hopelessly inscribed onto our bodies, we’re walking testimonies, interrupted morphologies, subversions of the cycles of life and the world. The world is still brutal and perhaps always will be; yet we crave to live in it, no matter how harmed, how compromised, how endangered. We are not talking about a place, a dwelling, a land: The world as an aggregate of the whole of human relationships and phenomena. When we are cut off from the organic thread of this horizon, our bodies becomes disentangled, dismembered and formless.

Those are the anonymous bodies slash collective that Shawki Yousef is presenting to us. Those are the victims without witnesses, without name, without identity. Those disappeared in the name of identity. These bodies without world hang there, suspended, beyond the threshold which we can merely gaze into. In his paintings, Yousef presents this collective we also carry inside of us, the burden of a shared history that we cannot repair, we can only do that, share it. But we do not have the means, we do not have the words, we do not have the criteria of judgment. Our memories are so vague, invisible, and at times even questionable; they are like those severed limbs, appearing, fading, colorful, sometimes ghostly, a haunting presence, a fleeing absence.

And yet we are ought to live with those ghosts. Joana Hadjithomas and Khalil Joreige expressed this necessity with great candour: ‘Being here, today, is accepting to live with our ghosts, to long for them, to feed them.’ At times, art is not only a contemplation of beauty, but also the recognition of its absence, the certainty that great things might still happen, regardless of circumstances. An Italian journalist writes from the frontline of the Syrian war: ‘It all could be over in an instant. If I knew that, then I wouldn’t have been so afraid to love, to dare, in my life; instead of being here, now, hugging myself in this dark, rancid corner, desperately regretting all I didn’t do, all I didn’t say. You who tomorrow are still alive, what are you waiting for? Why don’t you love enough? You who have everything, why are you so afraid?’

Originally published in The Mantle