A Literary Tour of Beirut, Lebanon

Caught in the mires of history, Beirut’s literary heritage appears to suffer from its longstanding effects to the present day. Redevelopment recently brought down Amin Malouf’s family mansion amid a debate, which you can follow here, and it appears one has to wait a bit longer for the future Lebanese National Library to be completed. Thankfully, however, Beirut still boasts more literary landmarks than many cities. In the wake of 2009’s Beirut39 literature festival, new initiatives are emerging to keep the city’s rich literary tradition alive. Here’s our guide to Beirut’s literary sights and an insightful perspective on the country’s cultural capital. 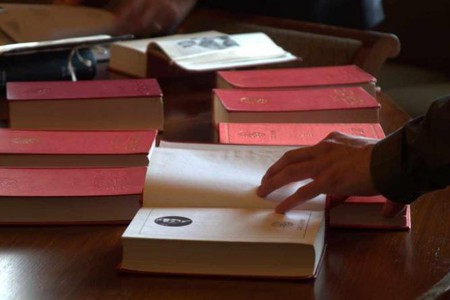 Lebanese literary heritage, particularly that of the early 20th century, is inseparable from the works of the diaspora writers that founded the New York Pen League – or Al-Mahjar group, as they are known in the Arab-speaking world. Arab-American writer and political activist Ameen Rihani, born in 1876 in the Mount Lebanon hill town of Freika, was one of the group’s founders. Prolific in both Arabic and English prose, poetry, and essays, his 1911 novel The Book of Khalid was a major influence on Khalil Gibran’s seminal work The Prophet, and is widely considered to be the first novel by an Arab-American writer in the English language.

The lower floor of the Rihani family house in Freika, some 20 km outside of downtown Beirut, is now home to the Ameen Rihani Museum. Established by the writer’s brother in 1953, a visit provides a comprehensive account of Rihani’s life and work through translated abstracts, manuscripts, personal belongings, and gifts from world leaders – a testimony to the reputation he enjoyed as an early political theorist of Arab nationalism. 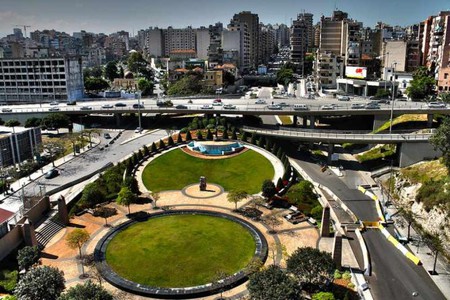 Lebanese-American poet, artist, and philosopher Khalil Gibran made waves in the Arab-speaking world with his role in the Pen League and the revolutionary spirit he brought to the modern Arab writing circle. Among English readers, he is largely remembered for his genre-crossing The Prophet, a favorite of the 1960s counterculture movement that established him as the third best-selling poet globally. Born in the northern Lebanon mountain town of Bisharri, Gibran moved to Boston at a young age, returning to Beirut for a couple of years at the age of 15 to study at the Maronite-run Al-Hikma higher education institute.

Lebanese culture proudly claims him as one of their own, but there are few traces of the poet’s legacy around the city other than this peaceful garden carrying his name in Beirut’s downtown. Facing the UN House and surrounded by high glass buildings, this oasis offers valuable respite with its fountain and series of abstract sculptures inspired by Gibran’s words.

Launched in 2013, The International Writers’ House in Beirut is an organisation based in Achrafieh neighborhood that seeks to gather writers in regular multilingual public meetings around a given topic. The mission is to remain true to the city’s tradition of cultural resistance, and – as a bastion of intellectual and artistic practices in the region – to rediscover the role literature and writing can play globally. It is well worth checking their program regularly; the most recent gatherings have included Poetry and Performance in May 2015, bringing together 12 poets from eight different countries, and the week-long Writers Between Two Cultures festival in October 2014.

The American University of Beirut Campus merits a visit regardless of its connections to the literary world. While many visitors take a stroll around the marvelous 19th-century buildings and green surroundings, few are aware that a significant number of the Arab world’s most important female writers studied here. Among them is Emily Nasrallah, an award-winning novelist whose works detail rural life in Lebanon and themes surrounding women’s rights; Palestinian-born architect and author of the best-selling Sharon and My Mother-in-Law, Suad Amiry; and the Syrian writer Ghada al-Samman, known for her highly regarded short-story collections and journalistic writings on the Six-Day War.

Another member of the Pen League, also serving as its vice president, is Mikhail Naimy. He published what he himself considered the pinnacle of his thought, The Book of Mirdad in 1948, a series of mystical dialogues discussing life philosophies spanning Eastern and Western traditions that boasted Indian mystic Osho among its admirers. He left New York in 1932 for his hometown of Baskinta, where he continued to write. In 1960, he published his autobiography, Seventy, in three volumes.

For the next 30 years, until his death at 99, little was known of this writer’s life. That is, until earlier in 2015, when Naimy’s daughter, Suha, opened the family’s Zalka Home to the public for the first time. It turns out that the “mountain elder,” as Naimy came to be known, lived in a house on the northern outskirts of Beirut for his last 20 years. Today, it welcomes devoted readers in its intimate spaces, full of personal belongings, poignant photos, and unedited manuscripts.