The Best Things to Do in Amman, Jordan 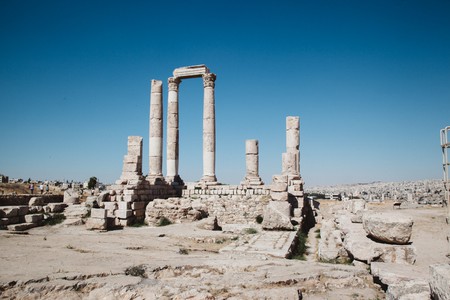 Whether your interests lie in the arts, history or food, Amman has everything to offer. Culture Trip explores the best things to do in the capital city.

Despite the fact that Amman has served as the country’s political and cultural capital since the establishment of the Kingdom of Jordan in 1946, visitors typically overlook this locale when planning their stay. The city was once home to ancient civilisations such as the Romans and the Byzantines, and today, it is bursting with life and increasingly looked at as an important city in the way of culture and arts in the Middle East.

Currently standing as one of the oldest inhabited mountains of the capital, Jabal Amman is fast becoming the centre of arts and culture in the capital, with many galleries and artist’s studios located in the area, including Nabad and Jacaranda.

The famous cobble-stoned Rainbow Street will guide you in and around the many coffee shops and restaurants where you can grab a bite to eat or enjoy a coffee whilst people-watching on one of the busiest streets in the city.

If you’re looking for somewhere to sit and enjoy magnificent scenic views of Amman, head to Wild Jordan Centre where you can grab a coffee or healthy, hearty meal. Owned by the Royal Society for the Conservation of Nature, the centre promotes Jordan’s thriving ecotourism sector and also houses a gift shop where you can purchase an assortment of handicrafts to take home with you. All profits of the centre go towards protecting and funding the many ecotourism sites in the country. 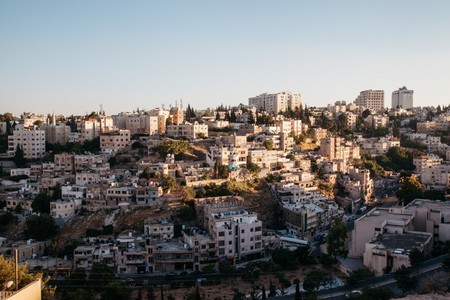 The hip, yet quiet area of Jabal Al Weibdeh is an intellectual hub of Amman, historically home to left wingers, artists, and writers alike.

When Amman was made the capital of Transjordan in 1946, many of the wealthiest sections of society moved to this area. Some of the oldest and architecturally pleasing buildings in this area used to be studios for artists and writers; however, many have now become unique cafés and cultural spaces. A wonderful example of this is the café Fan wa Chai (Art and Tea), which is now running as an ‘art cafe’, regularly exhibiting new works of contemporary art and photography throughout the year.

Must-see landmarks in this area include Paris Square and Darat Al Funun, the Khalid Shoman Foundation, a leading arts institution in the region.

If the weather is pleasant, spend your day café-hopping with a good book along Shariah Street. Rumi Cafe is a key bustling spot for young professionals and local youth involved in the art scene. If you are lucky enough to find a seat, perch outside and enjoy their amazing selection of teas (everything from Iranian to Yemeni tea) alongside a slice of organic fruit bread or cake. 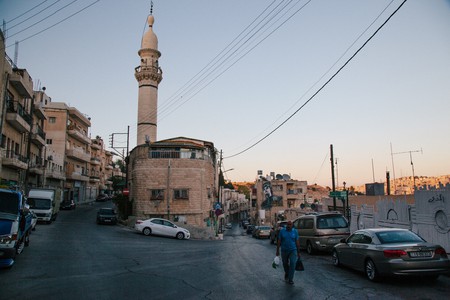 Downtown Amman is the heart of the city and sits in the middle of the surrounding seven hills, which originally made up this metropolis; therefore, it should be your one essential stop if you want to learn anything about the country and its people. Head to The Grand Husseini Mosque, located almost in the centre of downtown, where locals gather to pray throughout the day. There is also a fruit and vegetable market, which sits just behind the mosque, where you will find vendors singing to entice shoppers to their stall.

Widely considered to be the centre of the city’s trading and commercial activity, you’ll also find many shops and markets packed tightly into the confines of the district. Many open shopfronts sell everything from clothing and antiques to gold and smaller trinkets, but you should explore the six main streets – Prince Mohammad, King Talal, Quraysh, Al-Salt, Al-Hashemi and Basman – as they each have their own speciality when it comes to the goods for sale. For example, head to King Talal for handmade goods, carpets and fabrics or Al-Hashemi for an assortment of souvenir stalls. 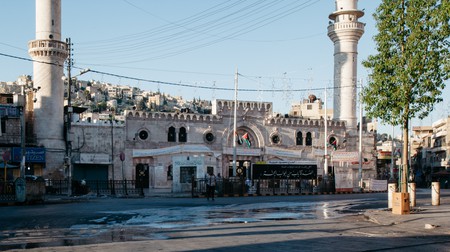 Check out the Amman Citadel

A historical site located in the centre of downtown, the Amman Citadel sits on Jabal Al Qal’a, one of the seven hills that originally made up Amman. The importance of the Citadel lies in it being one of the world’s oldest continuously inhabited places, and it has a long history of occupation by many great civilisations such as the Romans and Byzantines.

Notable places on the site include the Temple of Hercules, a Byzantine church and the Umayyad Palace, and while archaeologists have been working on the site since the 1920s, significant parts remain unexcavated to this day. 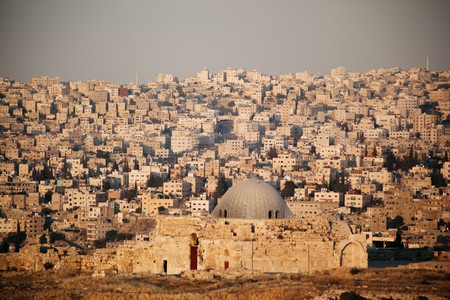 Be adventurous at Climbat Amman

Sports Center
Facebook
Email
Twitter
Pinterest
Copy link
Share
Map View
For the more active traveller, there are many outdoor activities, such as hiking and trekking, outside of the capital, but if you haven’t got the time for a day trip or the weather is not being your friend, then Climbat is the perfect destination.Located on the fringes of the city in Na’ur, Climbat has facilities for indoor rock climbing and bouldering, but make sure that you call them in advance to book your place to avoid disappointment.
Open In Google Maps
687 Al Quds St, Na'ur Naour, Jordan
+96265736177
Give us feedback 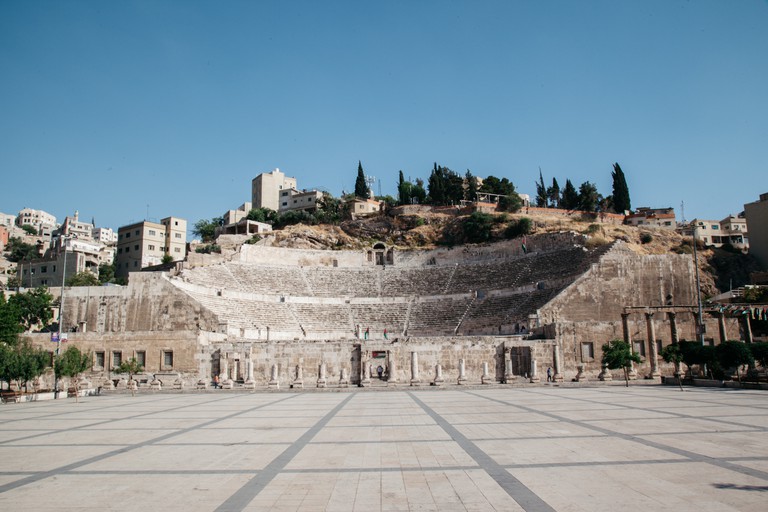 Roman Ampitheater | © Mo’taz Sulaiman/Culture Trip
Built during the reign of Antonius Pius in 138-161 CE, the Roman Amphitheatre lies at the heart of downtown Amman. A famous landmark in the city, these days it is often used to host popular concerts and other cultural events; the theatre itself boasts 6,000 seats. As they are close by, you’ll also be able to visit the Nymphaeum and the Jordan Folklore Museum.
Open In Google Maps
Roman Theatre Al-Hashemi Street, Al Madinah Amman, Jordan
Give us feedback

Traditional Jordanian food will be a highlight of your travel experience. If you manage to bag yourself an invite to a home-cooked dinner, then you’ve hit the jackpot, but there are also many authentic restaurants located downtown, including Al Quds and Shahrazad where you can sample dishes such as Mansaf and Maqloube for an affordable price.

While travellers know Jordan best for its rich history and beautiful landscapes, Amman is home to incredible contemporary Middle Eastern art. Art lovers will want to explore the areas of Jabal Al Weidbdeh and Jabal Amman, where most art galleries reside.

While there are many must-see galleries, the Jordan National Gallery of Fine Arts and Darat Al Funun, The Khalid Shoman Foundation are both essential visits.

Also, make sure you keep an eye out for the incredible street art around Amman as you’re exploring. In recent times, graffiti artists, such as Yara Hindawi, are becoming increasingly recognised in the art scene, and their works provide an added aesthetic dimension to the city. 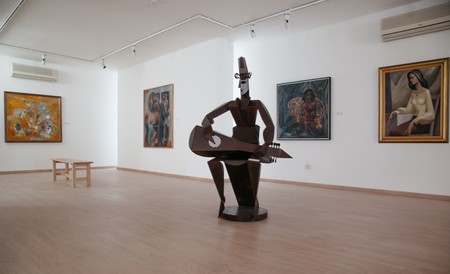 Dubbed by many as the ‘new downtown’, The Boulevard is a newly built $300 million complex in Abdali Project. Inaugurated in 2014 by King Abdullah II and Queen Rania, it consists of a pedestrian strip lined with greenery and romantic lighting, with 12 six-floor buildings where you can find mid- to high-range brands, coffee shops and even a hotel surrounding it. The duty-free shop is also here, so if you’re within the 10-day entry period into the country, head here for tax-free shopping on everything from cigarettes and alcohol to perfume.

Spend some time at TAJ Mall

Shopping Mall, $$$
Facebook
Email
Twitter
Pinterest
Copy link
Share
Map View
Located in the upscale area of Abdoun, TAJ Mall is more than just your typical mall. Alongside the wide variety of shops, there is also a cinema where you can catch the latest film releases and even a restaurant level where you can enjoy a tasty meal or a cup of coffee. In the evenings, there is also often a live band playing for diners located on the roof level.
Open In Google Maps
72 Prince Hashim Bin Al-Hussein Street, Zahran, Amman, Jordan
+96265921122
Give us feedback
Give us feedback