Inside the Ancient City of Petra, Jordan

The Treasury in Petra – made famous by Indiana Jones – is one of the most iconic historical sites in the world. Here’s our insider guide to the ancient city carved in sandstone at the heart of Jordan’s desert.

Interested in visiting Petra? You can do so with Culture Trip as part of a small group of like-minded travellers on our immersive nine-day Jordan trip, led by our local insider.

The history of Petra

Once the hub of trade for merchants across the Middle East, Petra faded into virtual obscurity for centuries until it was rediscovered in 1812. The Nabataean tribe of nomads ruled the region and settled into the surrounding mountains around 350BCE. They began to charge merchants for safe passage through this trade route – which had become a popular way of transporting rare items such as pepper, sugar, ginger, cotton, frankincense and myrrh. At its peak in the first century CE, Petra was home to almost 35,000 residents. 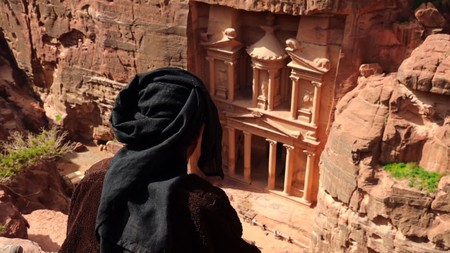 The valleys of Petra once housed a number of freestanding buildings too, but an earthquake in 363CE destroyed most of them and the city quickly disappeared off the map – both figuratively and literally – after another tremor in the seventh century. Petra was virtually deserted once more and so it remained for over a thousand more years.

Swiss explorer Jean-Louis Burckhardt had heard grandiose stories of ancient buildings carved into the cliffs of Petra and managed to persuade a local Bedouin to guide him through the narrow pathways that lead to the legendary city in the early 19th century. Burckhardt’s experience is similar to that of adventurers who visit Petra today – with tight caverns and tunnels opening up to reveal the breathtaking structures of southern Jordan.

The famous gorge that leads to Petra is known as the Siq. It is a narrow path through which you can approach the city and catch a glimpse of the Al-Khazneh (the Treasury) facade – which is the one most people think of when thinking of Petra. Unfortunately, you can’t go inside the Treasury, but there’s nothing to see anyway: it’s an empty chamber. It seems its creators were far more focused on crafting the outside. 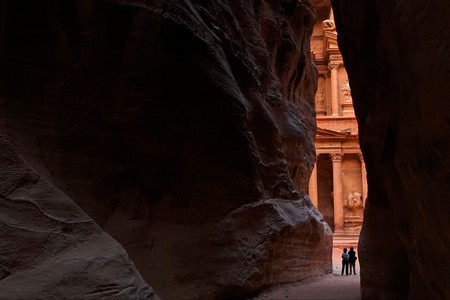 You’ll get a glimpse of Al Khazneh, also known as the Treasury, from the Siq | © Robert Preston Photography / Alamy Stock Photo

The Bab Al Siq guards the entrance of the Siq and is made of three large djinn blocks. These stone structures highlight why Petra is also known as the Red Rose City. 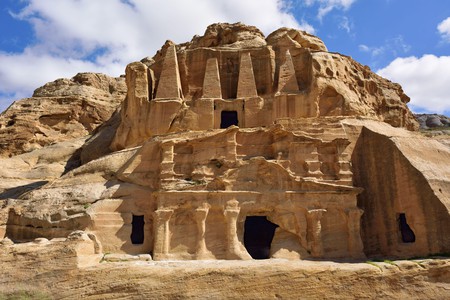 Other highlights of Petra include the Dam, the Street of Facades and the Theatre – there are also a number of tombs within some of the buildings themselves. Tickets should be purchased upon arrival, but there are various options available depending on when you arrive and if you chose to explore other locations close by – such as the High Place of Sacrifice monument or the Monastery. Another option is the Tour by Night, which runs three times a week.