The Best Places to Cycle in Jordan

Filled with ancient archeological sites, Jordan’s mountains and deserts are fast becoming a top destination for adventurous cyclists. Whether you’re in search of wild ungroomed trails, routes to take in Jordan’s many canyons, cliffs, streams and low-slung forests, or you simply want to experience the dramatic road climbs and descents, there’s something for you. Here’s our pick of the best cycling spots around.

Jordan‘s manageable size appeals to intrepid explorers on two wheels: cyclists can cover the entire 250-mile (402-km) length of country on King’s Highway or Dead Sea Highway (think: the distance between New York City and Washington DC). That said, no one comes to Jordan to stick to the main roads, which is why the recently founded Jordan Bike Trail (JBT) a is a hot topic among cyclists around the globe. The JBT 435-mile (700-km) mixed-track cycling route from Um Qais to Aqaba can be conquered in 15 days. Whether you go hard-core with JBT or cherry pick two or three destinations, here are the most amazing places in Jordan to explore by bike, listed from north to south.

The Greco-Roman remains of the town of Gadara (now called Um Qais), a city likely inhabited as early as the 7th century BC, is a spectacular site to explore – and cycle around. The trail skirting the edge of the ruins offers a stunning view of Golan Heights, Lake Tiberius and the Sea of Galilee. It may be possible to ride through the ruins, but typically permission is only granted to organized cycling groups.

Pro tip: Um Qais is also at the edge of the Yarmouk Nature preserve, 1,240 feet (378 m) above sea level, home to the one and only oak tree forest in Jordan. Cycling is allowed in the preserve, but local experts strongly recommend hiring a cycling tour guide. 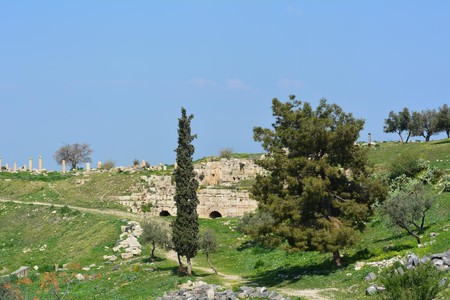 Famous for trees that yield some of the best olive oil in the region, the Ajloun area is home to several national forests, the famous Ajloun Castle and, just 15 miles (23 km) to the east, Jerash, the impressive sprawling archaeological site, second only to Petra. In the area, cyclists enjoy cruising roads canopied by trees and off-roading through Roman ruins. Start at Ajloun Castle for a ride to Wadi Zarqa along the JBT for an incredibly scenic ride along winding tracks descending over 3,300 feet (1,000 m).

Pro tip: If single track is your thing, check out Wasfi Al Tal forest area around 9 miles (15 km) south of Jerash on Highway 35. The area is home to several shorter circular off-road trails including an 10 mile (16 km) course of what might be the longest continuous single track in the country – all through a national forest. 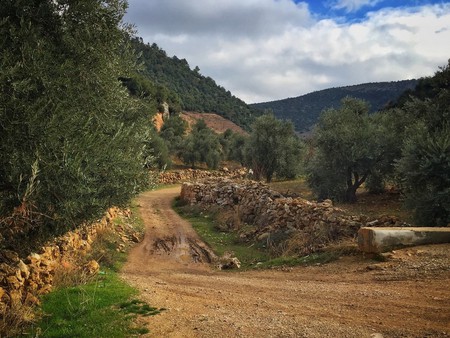 Where else can you ride from the lowest place on earth, 1300 feet below sea level (400 m), to a scenic Biblical overlook at 2,326 feet in elevation (763 m)? The route from the Dead Sea to Mount Nebo, the site from which it’s said Moses viewed the Promised Land, is irresistible to serious road cyclists who have a thing for ascents – or descents. After the huffing up the incline, the scenic ride from Mt. Nebo to Madaba (a town offering a treasure trove of ancient mosaics) is a sweet reward. Experienced cyclists venture south from Madaba toward Kerak along the JBT for some challenging technical sections, hitting the Dhiban Plateau, Wadi Hidan and Wadi Mujib along the way.

Pro tip: For a memorable sunset / night ride, head 20 miles (32 km) north of Madaba to Al Kafrayn, a large section of track along a cliff, great for a view of the sun setting over the Dead Sea, then as night descends, taking in the city lights of Jerusalem and beyond. 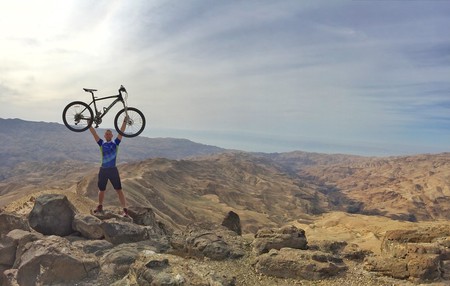 Kerak’s 12th century medieval crusader castle is one of the largest in the Levant and an ideal end point for a ride from Madaba or as a starting point to Wadi Hasa, 32 miles (52 km) south. Ride through Kerak city and surrounding family farms, then on to Wadi Hasa on one of JBT’s most popular sections. For a longer multi-day ride, start at Kerak Castle and head southward to Dana, Shuback or even Petra and on to Wadi Rum via the JBT.

Pro tip: 27 miles east of Kerak Castle is an area called Qatrana, and a 19 mile (30 km) loop on Jeep and sheep trails, where you can ride through a 3-mile (5-km) rockbed wadi and past all manner of crumbling Roman ruins: a watchtowers, cistern and a castle, remains of what’s said to be the furthest southeastern reaches of the Roman Empire in Jordan.

Cyclists riding around the ancient city of Petra can take in views of Petra and Wadi Musa from points inaccessible by car. Be sure to schedule a day or two to dismount and explore this Nabatean city on foot. While cycling isn’t practical or allowed in Petra proper, you can ride right into Little Petra. Book a hotel in advance in Wadi Musa, the town surrounding the archaeological park, or stay at Bedouin camp near Little Petra.

Pro tip: One of the most stunning rides in the country starts north of Petra at either Dana Reserve or Shobak Castle arriving in Petra, then continuing on to Wadi Rum. 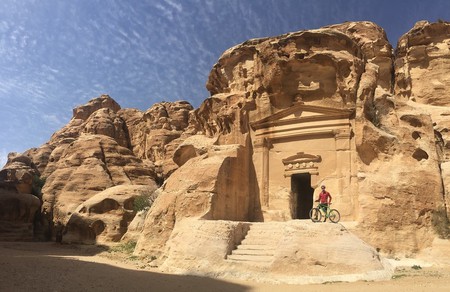 The sandswept landscapes and towering multi-hued cliffs of Wadi Rum feel completely otherworldly; in fact, The Martian was filmed here. Cycling beneath the grandeur of these rock formations is an experience you can only have in Jordan. It’s actually possible to ride over the red sands of Wadi Rum: cyclists ride on the Jeep-packed tracks and maintain speed to keep from sinking. When bikers do get stranded, it’s not uncommon for a Bedouin to come along and offer a camel ride for both rider and bike. Salt flats around the Disi area are also an option for an easier ride. There are several overnight Bedouin camps in Wadi Rum, ranging from budget to swanky: sleep in a goat hair tent, a geodesic dome bungalow, or under the stars on the sun-warmed sand.

Pro tip: The bike trek through the Wadi Rum desert to the Red Sea in Aqaba is invigorating and awe-inspiring. It can be a 5- to 9-hour ride, depending on sand conditions, even for the aggressively fit, and is best undertaken in any season but summer. Arranging a transfer with local Bedouin for the first 6 miles (9.7 km) from the village onto the hard sand will save some effort. 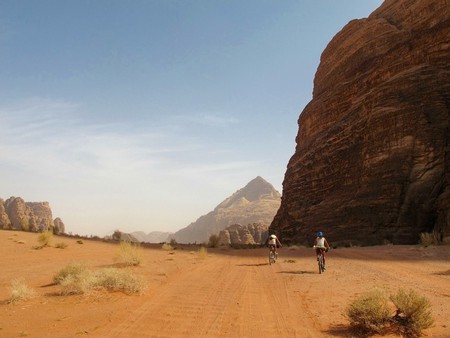 If you’re heading to Jordan for a once-in-a-lifetime cycling adventure, why not do it all? The newly inaugurated Jordan Bike Trail (JBT) is becoming to cyclists what the Pacific Crest Trail is to hikers. The trail is an epic bucket-list worthy adventure over territory few have pedaled. The trail isn’t marked or maintained so a GPS device or local guide is necessary. Luckily the folks who scouted the JBT now lead cycling trips – from a couple of days, to a 10-day “best of JBT” ride, to a 15-day fully supported north-to-south Um Qais to Aqaba ride. Not for the meek or out of shape, the trail means pedaling about 435 miles (700 km) and over 65,000 feet (20,000 m) elevation gain and descent, with highly technical off-road sections.

Pro tip: Contact Experience Jordan, the team who developed Jordan Bike Trail, for shorter guided trips tailored to all skill and fitness levels. Once you arrive in Jordan, you can also contact local bike shops like Cycling Jordan to provide guided day rides (due to licensing issues, arranging in advance is not allowed). 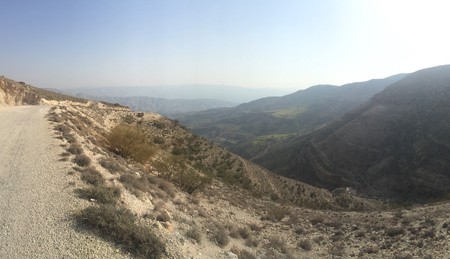