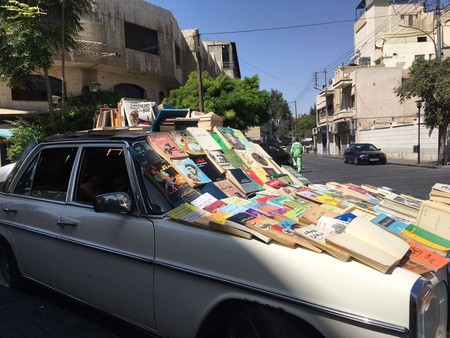 Meet Gaith Bahdoosheh, the pioneer behind Jordan’s traveling bookshop, “Books of the Road,” and founder of Madaba’s first ever bookshop. Inspired by his love for literature, 27-year-old Gaith made the bold decision to leave his corporate job back in 2015 to spread his passion for books and encourage a culture of reading in Jordan.

With the city’s oldest signs of settlement dating back to the Bronze Age, Madaba is incredibly rich in history, and is best known for its long tradition of Mosaic making. Nestled at the end of a series of quaint streets in the town lies Kawon, the city’s first and only bookshop. 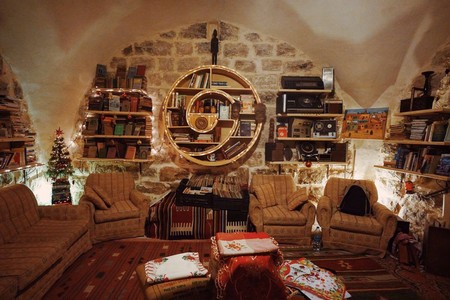 Stepping into the shop, you will find yourself in a small space with a huge amount of character—and a whole lot of books; books of every genre and classification, stretching geographically from every corner of the earth, telling tales in many tongues. You slowly start to understand why Gaith decided to name his shop after the universe, or Kawon in Arabic. “Books are the universe,” he says, “when you walk into the bookshop, it’s like walking into the universe.”

Books on the Road

After spending his last pennies on establishing Kawon, Gaith was faced with financial challenges in maintaining the shop. It was then that the idea came to him to take his car and sell books on the road around Amman.

“I came up with the idea that I would use my car to transport the books to people on the streets, I had no physical money, just my car, gasoline, and the books.”

He started off setting up a stall on the street in Jabal al-Weibdeh, but quickly realized the constricted pavement space was an issue for people.

And so, “Books on the Road” was born.

One of the biggest challenges Gaith faced was encouraging non-readers to take up reading as a hobby. “It’s very difficult because they may not have a grasp on how important reading is,” he says. “But the display of the books on the car helps, the books themselves attract people to the car and encourage reading. It gave attention to the book as a concept.”

Encouraging a Culture of Reading

One of Gaith’s biggest aims in setting up Kawon and “Books on the Road” is to encourage a wider reading culture in the country.

“I think its about the education, reading hasn’t gained much attention, from the ministry of education, public or private sectors, they dont teach kids about reading and its benefits outside of the school cirriculum.”

For Gaith, raising awareness around the importance of books and their essential role in understanding and shaping history and society is essential.

“Books altered alot of things, they are a pillar of society. When early civilizations wanted to build a city, first they built a library, books are the face of civilization.”

Instability in the Middle East has placed a great deal of pressure on Jordan from since over a decade ago. As one of the only countries in the region offering refuge to those feeling from war, economic pressure is amounting. The cost of this lies on young people in the country, who are now facing increasing levels of unemployment and limited opportunities. It has also meant that education and health institutions, and their services, are drastically underfunded. It is not surprising therefore, that focus on the arts and literature are not a priority for many Jordanians.

It is against this backdrop that Gaith, along with many other pioneering young Jordanians, are struggling to push through and encourage progress and positive change in the country. 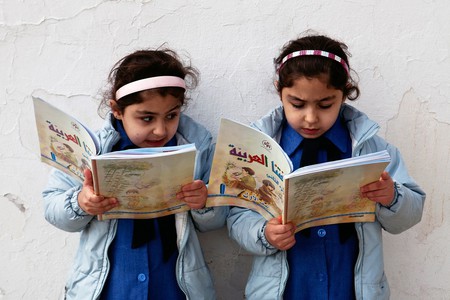 Literature in the Middle East, Then and Now

The rich history of literary works across the Middle East are no big secret. Poetry is so engrained into culture and tradition in Jordan that tribes in the country depend on it as a means to preserve their histories. Words have a greater depth here. Religion, the backbone of society, is held within words, and preserved in books.

Born into a Christian family and brought up in a Muslim-majority country, Gaith tells me how he likes to think about the subject of reading from the early messages of religion.

“In the Holy Qur’an, the first verses recited to the Prophet Muhammad P.B.U.H, were: ‘Read! In the name of your God,’ And in the Bible, in Genesis it says: ‘First was the word, and the word was with God,’ what is the word? It’s knowledge.”

Unfortunately, the emphasis on reading and knowledge has faded in modern times. Gaith puts this down to many reasons, including the economic and political situation in the region. The revered writings of many great Arabic scholars, writers, and poets are no longer available, and the bonds between writers have unfortunately worn out.

One of Gaith’s projects at Kawon is to reprint old books. “There is a section in the shop called ‘books are not for sale,’ people can research them and see what they are and the aim is to reprint them in the future.”

Gaith’s Vision For the Future

Gaith has recently launched his campaign to expand the bookshop, as well as inject more funds into “Books on the Road.” He hopes that this campaign will enable him to drive further distances and bring books to people living in more remote areas of the country. For more information visit his fundraising page here to learn more about his mission and see how you can help.