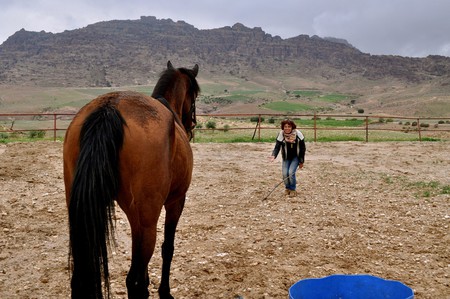 Nestled among mountains in Little Petra, Jordan, inside a paddock, two horses approach a woman, eagerly awaiting a sign. They make contact, nuzzling into either side of her neck; she cries. “I know exactly what it meant,” she says. Equine therapist Sandra Jelly is leading a group of five women through equine therapy and unveiling to them the horses’ healing power.

Equine therapy puts people and horses together with a therapist in an environment designed to promote emotional growth and learning. It is used for many conditions from addiction to depression and post-traumatic stress disorder. This type of therapy is not a new phenomenon; the use of horses within therapy can be traced back thousands of years. In the ancient Greek writings of Hippocrates, he described ‘hippotherapy’, meaning horse therapy.

“Horses are still connected to their 56 million years of wisdom, they’re connected to their souls,” explains Sandra. “They give immediate feedback and once someone connects to their authentic being, the horses respond to that. When we accept all that is, we open up to a different field of awareness and from this, emotions can flow and wisdom can come through. That helps people to release limiting beliefs and patterns that have sustained them in the past, so they can step into their authentic truth.” 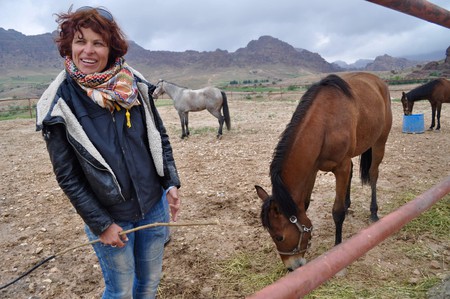 Sandra Jelly about to embark on an equine therapy session with Gamar, Nour and Remaz | © Sophia Charalambous / Culture Trip

Netherlands-born Sandra has been living in Jordan for nine years, her journey starting with an advertisement in a Dutch newspaper that read ‘Petra on horseback’. Having always loved horses, the ad encouraged Sandra to embark on an adventure miles away in Jordan. She found her first horse, a mare named Gamar, now 14, and participated in the local endurance race which is held in Wadi Rum every year in November. The plan was to sell Gamar after the race but the horse became pregnant; she now has three children: a gelding named Nour, seven, Remaz, a four-year-old mare, and Zahir, a one-year-old, soon to be a gelding.

These horses have become Sandra’s ‘true family’ and Jordan, a land that is 90% desert with a 40% Bedouin population, has become her home. “The first day I arrived I fell in love with the country,” she says. “The people still kind of live in a traditional way. They’re not all Bedouins obviously, but still, in Wadi Rum and Wadi Musa they’re close to the old ways, still living in Bedouin tents—they don’t have malls or any distractions. The link with the desert is so strong; you connect to yourself already by being there.” 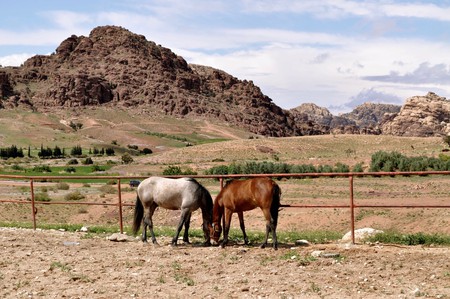 A grey cloud lolls over the paddock, delivering a light shower that turns into heavy droplets. The group retreats to an unused stable where Sandra asks everyone to draw their experience with colouring pencils. She explains: “Writing often limits the experience so I prefer asking people to draw because it doesn’t come from the mind, it comes in from your felt perception. After the therapy, you shift in such a way that your life is never the same, but it depends on what your personal journey is like.”

Family consultations, one-on-one’s, even meditation can be incorporated into equine therapy, helping with everything from work stresses to relationships, but Sandra is quick to emphasise the difference in approach compared to some other therapies. “We approach people as being whole,” she says. “They’re not sick, they’re not limited, they don’t need help, they just need to reconnect to their truth.” While there are currently no empirical studies to prove the efficacy of equine therapy or equine-assisted psychotherapy (EAP, as it’s more formally known), scientists have acknowledged the benefits of the rhythmic movement of horses. Commonly known to treat conditions such as anxiety, behavioural disorders, depression, eating disorders and substance abuse, the US Department of Veterans Affairs has provided grants for EAP practitioners to run sessions for returning troops from Afghanistan and Iraq to help with PTSD, with preliminary studies already seeing positive results. Sandra adds: “Horses bring you into the moment, into self-perception, and because they are highly intuitive flight animals, they sense you with a clarity that reflects your story back right at that moment.” 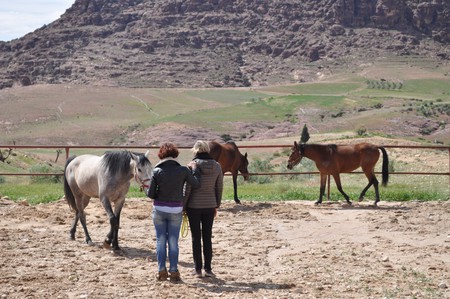 The rain stops and, for a brief moment, there’s a ray of sunshine. The group of five women embrace each other before continuing on their journey in Jordan, a country best known for the UNESCO World Heritage Site of Petra. Sandra, who is also a yoga teacher, is eager to share Jordan, which she believes is so much more than a prehistoric site. “Jordan allowed me to change my life from being very organised and controlled to more heart-centred because the culture here is about community,” she says. “Its culture, its nature all helped my development of becoming present and not being led by my mind, and this all connects you to your inner beauty. The horses helped me to connect to my emotional side and thus I could connect deeper with myself.”