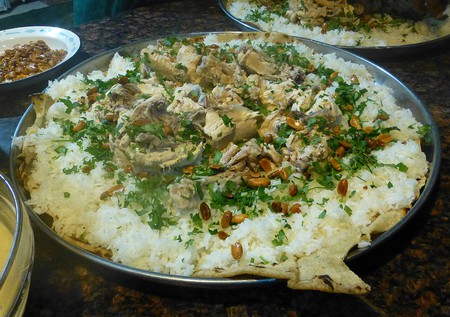 Mansaf, meaning “large platter,” (or “destructive,” in reference to how fatty the dish is), has developed drastically over the years. First prepared in the Bedouins of Jordan with lesser-known ingredients, what used to be called mansaf was camel or lamb meat cooked with meat broth or ghee and a side of shrak or markook bread. Rice was not introduced into the dish until the late 1920s, and jameed, sour fermented yogurt, is a recent development. 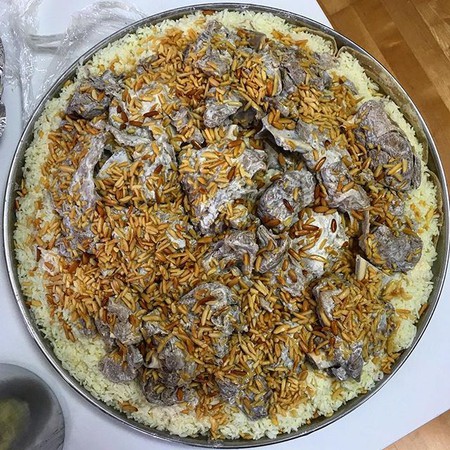 Mansaf was only fully developed to its famous state during the Hashemite-Mandatory era of the early 20th century and named Jordan’s national dish following the country’s independence from British colonialism. Although associated with Jordan, it’s only fair to point out that mansaf is also popular in Palestine, Iraq, Syria, and Saudi Arabia, with slight differences in preparation.

Jameed, the delicious essence of mansaf, can be easily prepared at home by boiling sheep’s or goat’s milk, which is then fermented and kept in a woven cheesecloth; salt is added to thicken the milk into yogurt that is then shaped into balls. Karak, one of Jordan’s most notable cities, is famous for manufacturing the best quality of jameed. 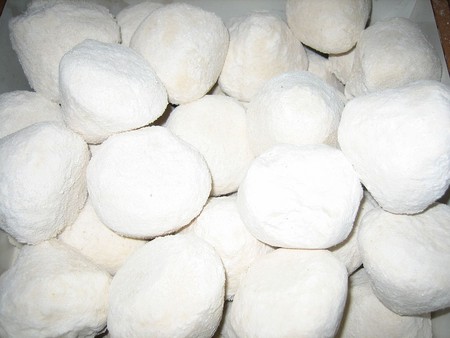 Mansaf takes a good hour to prepare it. Pieces of meat are added to a block of cooked jameed and seasoned until well done while the rice is cooked separately. The dish is served in a large platter in a specific order: a base layer of flatbread, alternating layers of rice and jameed, topped with meat, and finished with a spoonful of jameed and decorated with pine nuts and almonds. Some Jordanians will use the head of the camel or sheep as decoration as a symbol of the good quality of the meat.

A large platter of mansaf must be present at every major occasion: funerals, weddings, births, graduations, religious holidays, and Jordan’s Independence Day. It is traditionally eaten in the rural Bedouin style, with the platter on an elevated table and people standing around it, sometimes with the left fist behind their backs and using the right hand in a cupping motion to collect the rice and meat into balls. 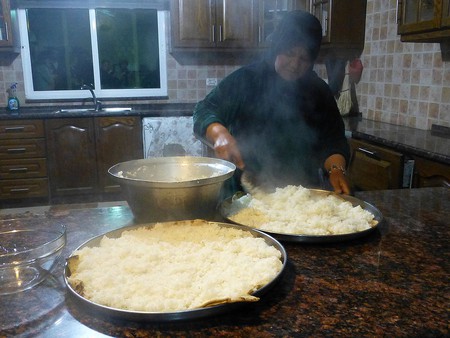 An urban version of mansaf substitutes meat with poultry, but this variety is most commonly prepared by Syrians and call it shakryyeh. But Jordanians won’t call it mansaf or admit to eating it.