The Best Hotels in Amman, Jordan 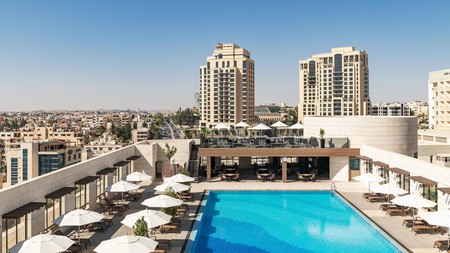 Steeped in the history of ancient civilisations and pulsing with modern commerce and nightlife, Jordan's capital has something for everyone | Courtesy of Sheraton Hotel / Expedia

Amman was historically cradled by seven hills, but several 20th-century growth spurts have pushed the capital of Jordan well beyond those quaint-sounding boundaries. Amman’s top hotels blend luxury and style, and often double as social hubs for the local glitterati. Read on to discover the best hotels in Amman, bookable with Culture Trip.

Discover Amman and all that Jordan has to offer by booking yourself onto Culture Trip’s Rugged Jordan Tour, an epic nine-day adventure through the Jordanian desert. From wine-tasting in Amman to hiking through rust-coloured mountains and snorkelling in the Red Sea, experience a lesser-known side of Jordan with TRIPS by Culture Trip. 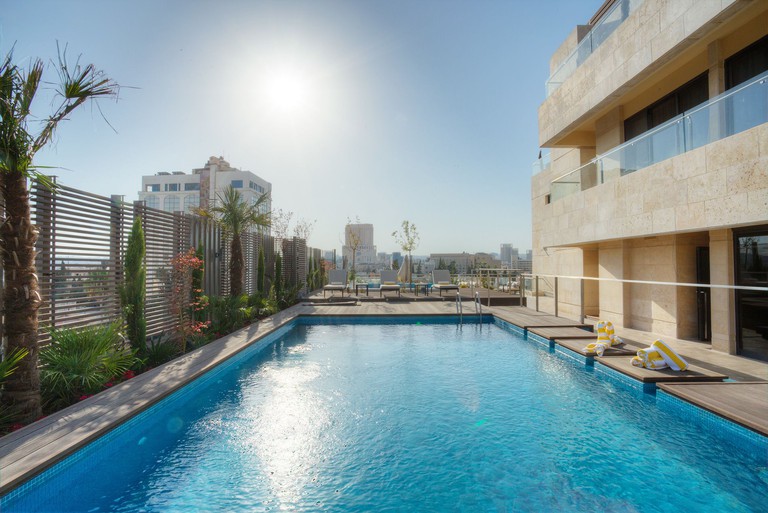 Courtesy of The House Boutique Suites / Expedia
The House brings outdoor space, shrubbery, a conservatory and even a rooftop pool with a sundeck to the heart of downtown Amman. The pendant lamps, restrained chandeliers and polished marble floors in the lobby enhance the upscale credentials without being showy. Accommodation is smart and sleek with a restrained palette of beige and cream, while large windows lend panoramic views across the city. 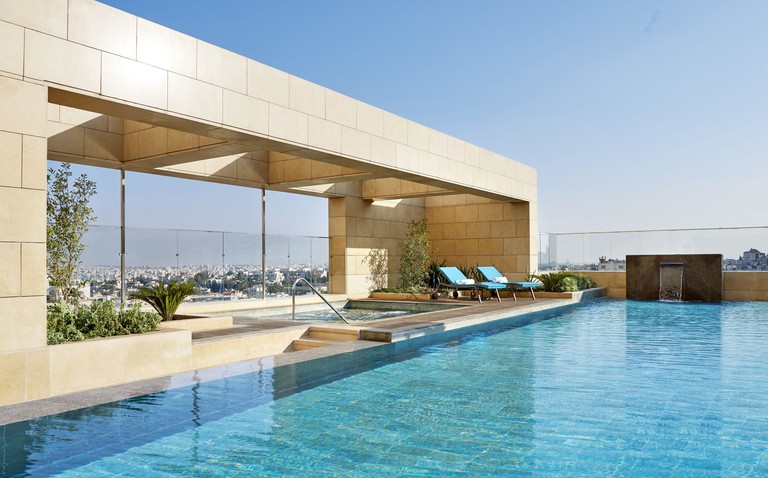 Courtesy of Fairmont Amman / Expedia
Among the most opulent hotels in the city, the Fairmont Hotel in Amman is all about modern grandeur, from the handsome black-and-white lobby to the globe chandelier. There’s also a display of around 1,600 artworks, most by Jordanian artists. Commodious rooms and suites blend contemporary design and luxury, especially in the exclusive Gold wing. Japanese cuisine in restaurant Tsuki lends a sophisticated atmosphere. 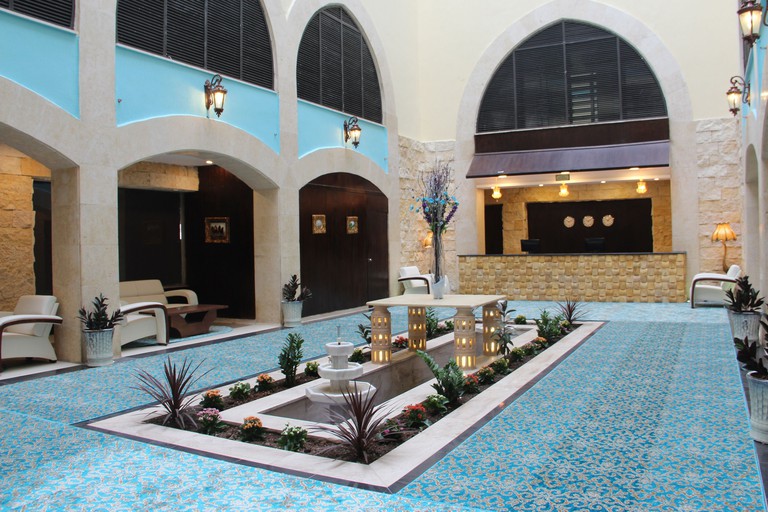 Courtesy of Saray Hotel Amman / Expedia
West of the city centre, the ungainly exterior of Saray masks an arched courtyard and lightwell, around which rooms are arranged. A water feature, plants hanging from balcony corridors, rustic masonry and decorative niches contrast with the straightforward yet comfy rooms. A restaurant has cityscape views and Middle East cuisine while Fayrooz Café has music-themed decor that taps into the appeal of one of the most famous singers in the Arab world. 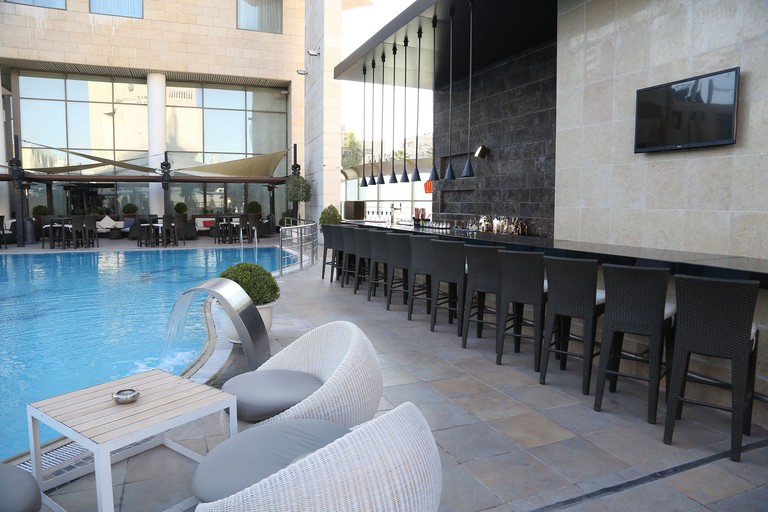 Courtesy of Kempinski Hotel Amman / Expedia
Located in the downtown Shmeisani commercial district, the Kempinski Hotel in Amman has a central location that embraces both business and leisure travellers. Rooms are plush and modern with large panoramic windows; some even have balconies. There’s a dedicated sports bar with widescreen TVs. Plus, unusually for a luxury hotel, the Strikers Entertainment Centre features an eight-lane bowling alley, as well as billiards and darts. An adults-only outdoor pool lounge dials up the clubby vibes with DJ sets. 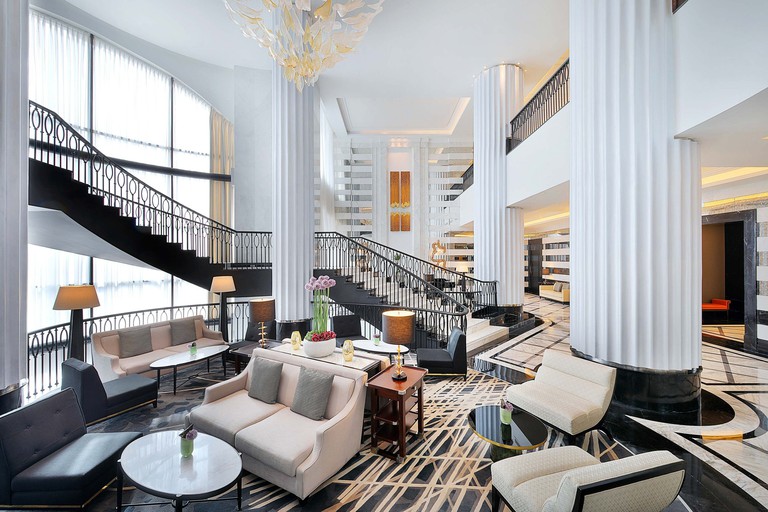 Courtesy of The St Regis Amman / Expedia
Just a few blocks south of the Fifth Circle luxury hotel enclave, this is a sandy-brown high-rise topped with a dainty dome. By blending minimalism with theatrical flourishes, the interiors are exciting and arresting. Fanciful touches are everywhere, like a blossom chandelier with golden petals, the galloping horses mosaic at the bar, or ornamental canopies above some beds. 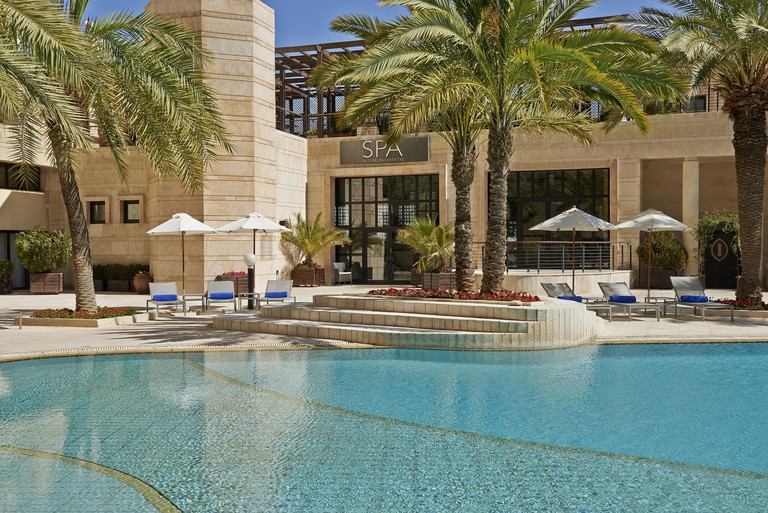 Courtesy of InterContinental Amman / Expedia
Having long outgrown the core area, open space is at a premium in Amman. Located on one of those original hills, the InterContinental has more sunny cafe terraces than most central hotels. Rooms and public areas feature interesting design touches, from quirky carpets to weird lighting and a chandelier-hung atrium. The cosmopolitan dining options range from Lebanese to Mexican. 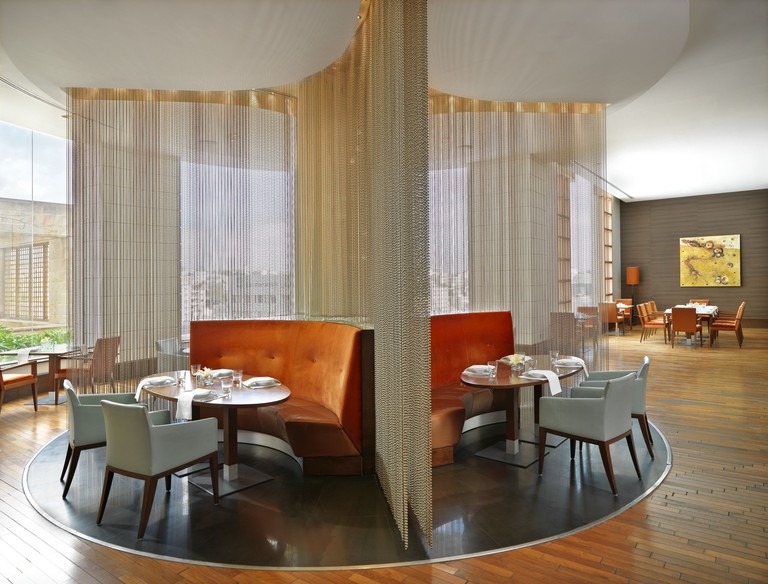 Courtesy of Grand Hyatt Amman / Expedia
With a commanding hilltop presence on the city skyline, the Hyatt is distinguished by large multi-panelled windows bearing a hexagonal design. Inside, meanwhile, you get indoor and outdoor pools, a spa, lounge bars and one of the largest ballrooms in Amman. Apart from the unique windows, interiors are slick and contemporary with few nods to Middle Eastern motifs or decor. There’s a particularly attractive outdoor bar and cafe terrace, while the spa features Jordanian-infused Dead Sea treatments. 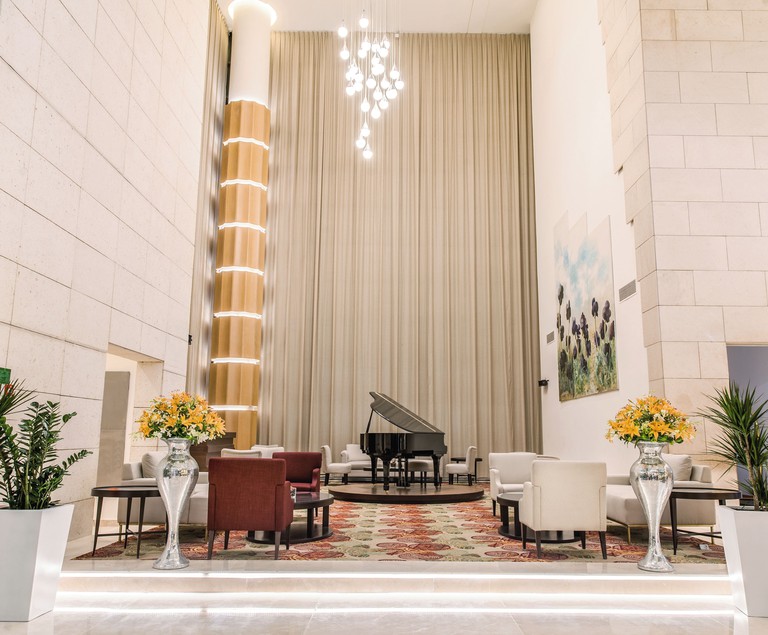 Courtesy of Movenpick Hotel Amman / Expedia
Opened in 2019 after a major refurbishment, the Movenpick Hotel in Amman has a lofty lobby with a baby grand piano framed by maybe the tallest drapes in the city. There’s a huge ballroom and particularly pleasing outdoor swimming pool – unusual in the city centre – with a spacious sundeck. The sports bar and swanky cocktail lounge lend an appealing buzz, sophisticated yet trendy. 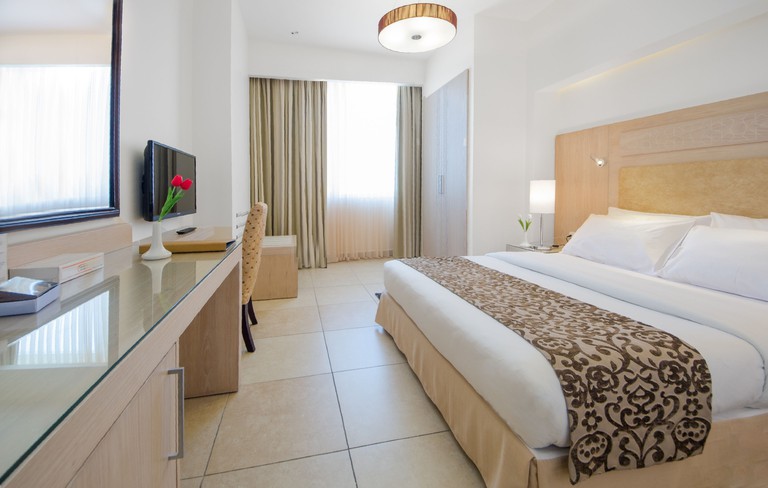 Courtesy of Toledo Hotel / Expedia
The Toledo Hotel in Amman is a great option if you don’t want to break the bank, offering breezy rooms with views over the blue-domed King Abdullah Mosque. There’s a restaurant-cafe decked in Andalusian design, serving a mix of Western and Eastern dishes. The fitness centre has a lap pool, steam rooms, exercise machines and a hot tub. Although, with Al Abdali Boulevard – home to an array of cafes, restaurants and shops – just two minutes’ walk away, you may prefer to use your time exploring. 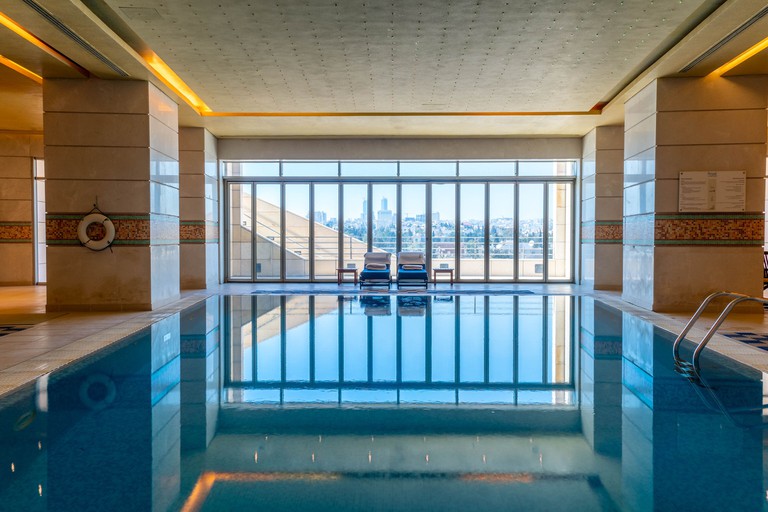 Courtesy of Le Royal Hotel / Expedia
If you’re seeking luxury, check into this five-star hotel in the heart of Amman. Le Royal Hotel is one of the tallest buildings in Amman, boasting an impressive dome roof that makes quite the statement. What makes it a piece of art, though, is not only the opulent interior features but also the exterior light show beaming into Amman’s night sky. 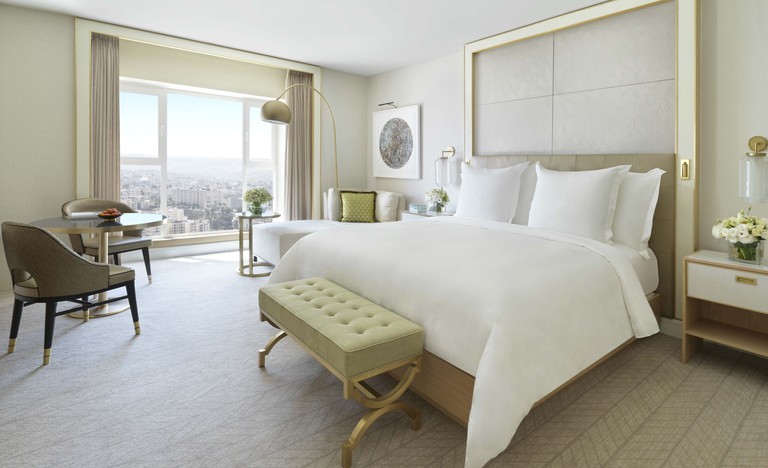 Courtesy of Four Seasons Hotel / Expedia
Standing on the tallest of the seven Amman hills, this Four Seasons outpost is a luxury giant. Take advantage of the location and enjoy stretching cityscapes from your room; book a deluxe executive suite for a balcony on the top floor. A Romanesque outdoor pool offers more panoramas, while an elegant collection of restaurants and bars are ready to serve you. 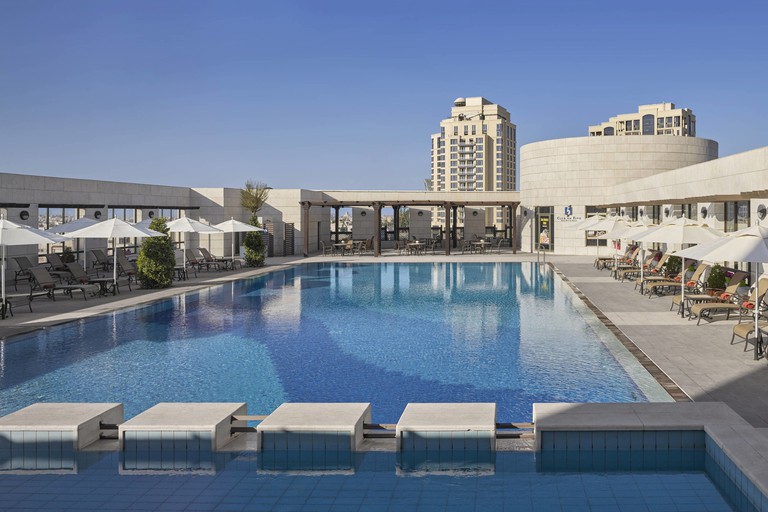 Courtesy of Sheraton Hotel / Expedia
The white-stone façade of the Sheraton is appropriate for this luxury hotel brimming with impressive features. It’s got an enviable selection of eateries, like the al-fresco Italian restaurant EVOO. The rooms and suites are more homely – even with their flooring cityscape views. 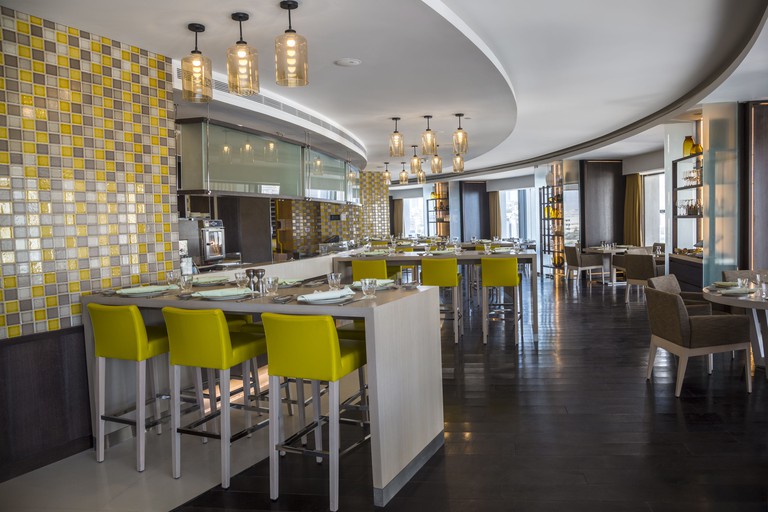 Courtesy of Amman Rotana / Expedia
Rotana Hotel is located in the “new downtown” of the capital, Abdali Boulevard. It’s so unique to the city of Amman that it was ranked as the hotel with the best value. 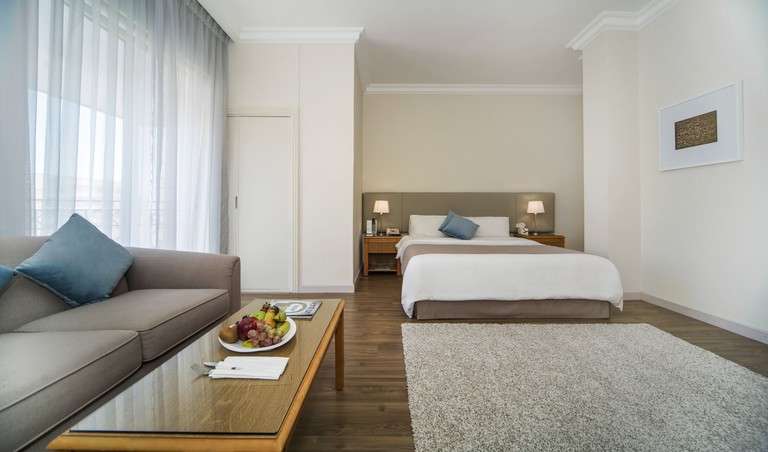 Courtesy of Al-Qasr Metropole Hotel / Expedia
If you’re seeking a less luxurious hotel, but with benefits of location and antiquity, this hotel is your gem. The Al Qasr Metropole nestles in Shmeisani, a serene neighbourhood surrounded by all necessities such as banks, supermarkets, pharmacies, gyms and more. 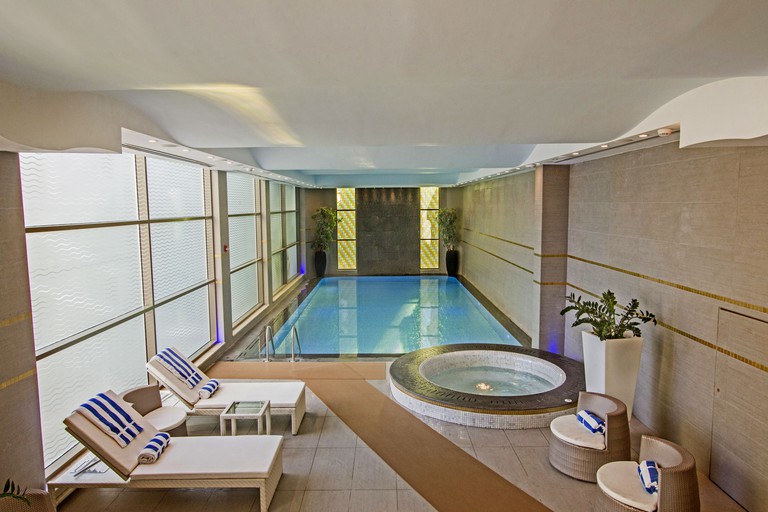 Courtesy of Millennium Hotel / Expedia
The Grand Millennium Hotel is located in Amman’s dynamic Shmeisani neighbourhood, where restaurants, pubs, bars, liquor stores and a long street of cafes can be found. Housing the Sky Lounge, this spot will make your stay a party-filled one.

Barely an hour away from Amman is the Dead Sea, a must-see when you’re holidaying in Jordan. See the best hotels near the Dead Sea and book your stay with Culture Trip.