Zed Nelson’s Photojournalism: The Beautiful And The Banal

Zed Nelson is an internationally acclaimed documentary photographer based in north London. He has won numerous awards for his contributions to photojournalism, including the Visa d’Or and first prize in the 2010 Pictures of the Year Competition. He has a keen eye for contemporary social issues and hypocrisy at home and abroad. The artist’s bibliography includes A Portrait of Hackney (2014), Love Me (2009) and Gun Nation (2000). We explore the remarkable photojournalism of Zed Nelson. 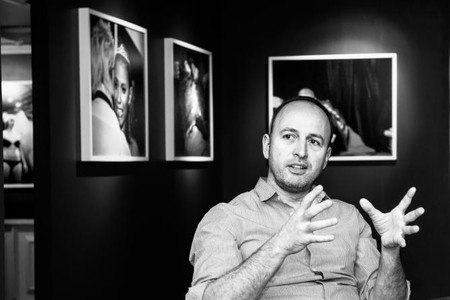 Looking at Zed Nelson’s photographs is the equivalent of reading an essay on the hypocrisy of modern life or the superficiality that surrounds us every day. The artist’s work is successful because he is able to take those abstract thoughts and doubts that we have about our society, and put them down on paper.

The bold stance and unabashed stare of a vibrantly clad woman graces the cover of Zed Nelson’s latest collection of photographs, A Portrait of Hackney. Pairing her African print jumpsuit with one of Zed Nelson’s signature glares, the portrait sets the tone for a series of images depicting Hackney at its coolest and poorest, its slickest and sickest. A row of green, pink and purple bins lined up against a brick wall perfectly captures the fusion of the glorious and the mundane. In another image, a tiny boat carrying a man and woman floats just right of centre on a bed of green sludge. Should we focus on that miniscule point in the image where the couple’s lips meet, the ‘decisive moment’ that Nelson has so elegantly captured, or rather the toxic green slime on which the scene is acted out? Probably both, for it is exactly that juxtaposition between the beautiful and the banal to which Zed Nelson draws our attention time and time again.

In Love Me, we are taken behind the scenes on a tour of the twisted and fascinating world of plastic surgery. As well as presenting the global reach of Western beauty ideals, this collection of images questions the very nature of beauty and its ever-changing face. It does so in an abstract and non-judgemental way. One notable image depicts a fifty-five-year-old woman and her nineteen-year-old daughter, both flaunting looks of full-on, guilt-free, eye contact with the viewer in spite of the fact that the girl’s face is heavily bandaged; she has just undergone rhinoplasty. The picture was taken in Iran and is accompanied by a short paragraph stating that Iranian women have followed strict social rules for over twenty years, yet paradoxically the country boasts the highest number of nose jobs in the world. This raises a number of questions. Zed Nelson’s photographs are therefore comforting and unsettling, because the viewer is also invited to weave their own opinion into the tapestry; the images are both social commentary and choose-your-own-adventure stories.

Zed Nelson’s cynical, macabre and yet beautiful photography can, and should, be revisited numerous times, as each viewing prompts new reflections. We, the viewers, will evolve but these images will continue to reflect our dreams and nightmares, our hopes and fears, our pride and our disappointment. They will continue to raise questions and challenge presumptions: does the image of a father holding a gun to his baby’s head represent danger or safety? (Gun Nation). How much can we assume about a family by watching the members change in photos taken annually over a period of twenty-two years? (The Family). Is beauty a naturally occurring phenomenon, or a warping and heightening of reality? Is it in the eye of the photographer or the beholder? These pictures are more than just art or statements: they are questions. The fun is deciding how to answer them.