Why Tel Aviv Should Be on Your Bucket List 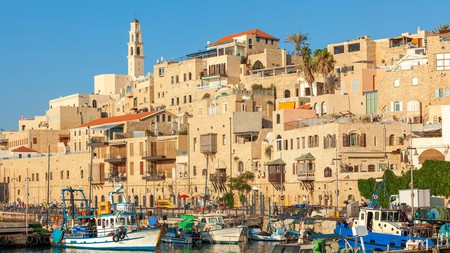 Acclaimed for its liberal spirit, 300 days of sunshine a year and a stretch of 14 beautiful beaches, Tel Aviv pulsates with energy from day to night and back again.

Tel Aviv is the first modern Israeli city. It was founded in 1909, and the city’s population grew rapidly during the 1930s and 1940s, as did its appeal within the country. Tel Aviv’s non-stop action is attractive to all types of travellers, as are its exemplary culinary scene, authentic outdoor markets, thriving LGBTQ community and effervescent nightlife. With cultural appeal and entertainment galore, here are some of the reasons to visit Tel Aviv.

The city’s neighbourhoods brim with charm

Tel Aviv’s neighbourhoods are especially unique given that the city spans only 52 square kilometres (20 square miles). At the southern end lies the ancient port city of Jaffa with its charming enclaves and maze of alleyways. A city of coexistence dating back more than 3,500 years, it is known as the location of many biblical tales as well as having some of the trendiest spots for shopping, dining and drinking. 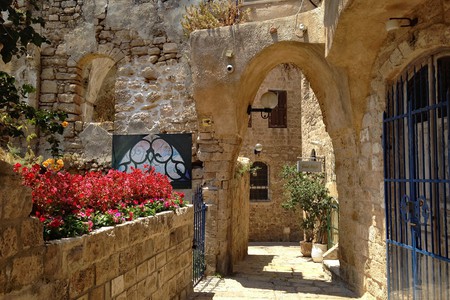 Also in the south is Neve Tzedek – the first Jewish suburb to be established outside Jaffa – a neighbourhood characterised by its narrow streets, artistic buildings and fashion, jewellery and lifestyle boutiques. Steps away but in a world of its own is Florentin, the city’s trendy art district, awash with a canvas of dynamic street art, tattoo parlours and shabby-chic cafés. In the centre lies Dizengoff, an area renowned for its day-to-night buzz, a rich catalogue of shops and dozens of packed bars. And for a moment of serenity, the Old North offers a leafy green oasis in easy reach of Hayarkon Park, the city’s answer to Central Park, as well as Tel Aviv’s port and a plethora of upscale eateries. 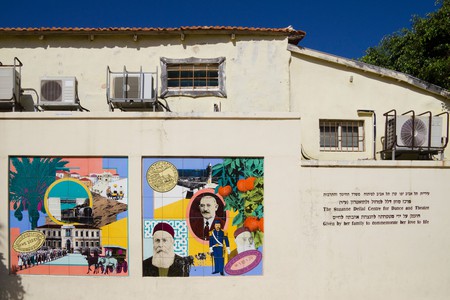 The markets offer a snapshot of local culture

Tel Aviv’s markets showcase the past and offer a glimpse into the daily life of the city’s residents today. Carmel Market, located off Allenby Street, is bustling with activity six days a week with Tel Avivians buying daily provisions from groceries, fresh fruit, vegetables and baked goods to spices, flowers, fish, meat and homeware.

The Levinsky Market in Florentin was established in the 1920s by Jewish immigrants from Greece and later taken over by immigrants from Eastern Europe. The market maintains much of its original shabby-chic allure, with exotic aromas filling the streets from vendors selling spices and local delicacies. The Shuk Hapishpeshim in Old Jaffa has been in existence since the early 20th century and still maintains its old-world charm. The market specialises in fine furnishings, antiques, bespoke jewellery, clothing boutiques and home-made cosmetics. 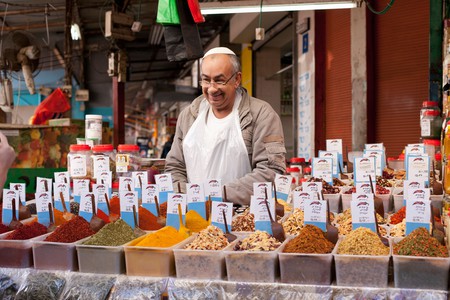 The nightlife is second to none

Thanks to its youthful spirit, year-round warm weather, creative use of the limited space available and the ‘live for today’ attitude of the locals, Tel Aviv’s party scene is guaranteed to provide fun all night long. The city has been transformed into one of the world’s top nightlife destinations, with bars and clubs often open past dawn and playing an eclectic mix of beats to suit every musical taste.

For a flavour of what the city has to offer, check out Kuli Alma, a supreme hipster hang-out and one-of-a-kind venue with some of the best DJs in town; it’s also renowned for its alcoholic slushies. Alternatively, BuXa on Rothschild Boulevard is an uber-cool venue regularly hosting parties with guest DJs playing to a diverse crowd of Tel Avivians. For late-night fun, The Block, located by the central bus station, is a mega-club inspired by 1970s and 1980s old-school New York and the ultimate spot to soak up the city’s unparalleled party vibes until well after sunrise. 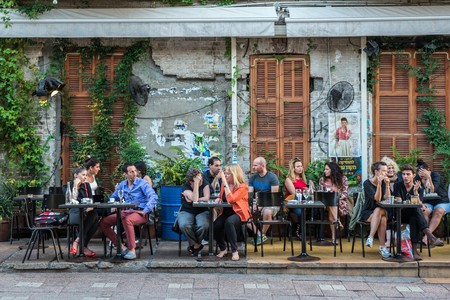 Diners take their ease along Rothschild Boulevard, one of the oldest streets in Tel Aviv | © kpzfoto / Alamy Stock Photo

The vegan dining is outstanding

Some of the world’s most creative plant-based cuisine can be found in Tel Aviv, which boasts a superlative vegan culinary scene. In fact, Israel has the highest percentage of vegans per capita in the world, with an estimated 400,000 people (5 percent of the population) embracing the lifestyle – just one of the reasons it has earned the nickname ‘Vegan Nation’. The country’s abundance of fresh produce heavily influences culinary trends from north to south, with hundreds of restaurants catering to vegans. 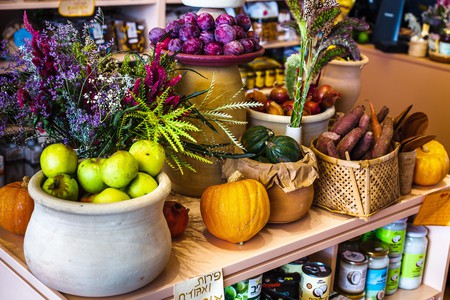 Treat yourself to lunch at Bana, a vegan hotspot with an imaginative selection of plant-based mains and mouthwatering sweet treats, such as ‘nice cream’ and chocolate bark with berries. Rainbow Burgers does a great job of imitating the classic beef burger, both in taste and presentation. It’s crafty in its use of cashew cheese, seitan and vegan mayo, and even the city’s meat lovers are fans. Zakaim is a popular dinner spot just steps away from the buzz of Rothschild Boulevard. The eclectic restaurant infuses fresh, raw ingredients into its creative menu, showcasing just how good vegetables can taste – as proved by its skewer of wild oyster mushrooms grilled on coals.

The art scene is impressive

Tel Aviv’s street art is excellent, with many neighbourhoods, particularly in the south, canvassed in imaginative and captivating art. Many artists’ platforms are cropping up throughout the city, and there’s plenty to see in the galleries and artistic spaces, from contemporary works to exquisite sculptures. 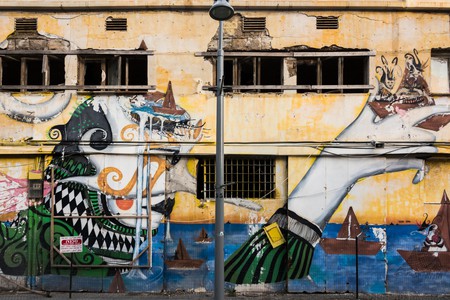 The Under 1000 Gallery on Florentin’s Abarbanel Street is an inclusive platform where a range of Israeli artists hang their affordable artworks, with no one piece costing more than $1,000. Meanwhile, in North Tel Aviv, Israeli and international artworks are handpicked and displayed across the stylish loft that is Art Market, located on HaTa’arucha Street on the corner of Dizengoff. 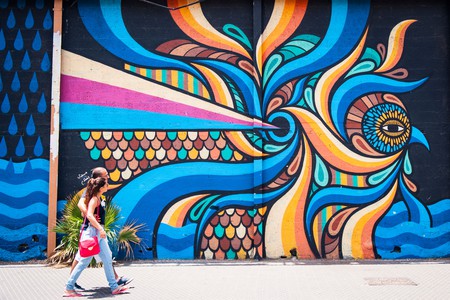 The Pride Week is out of this world

A visit to Tel Aviv in June extends a special opportunity to be a part of the largest Pride parade in the Middle East. Attended by hundreds of thousands of city locals and international visitors, it features a jam-packed week of events, celebrations and all-day parties. Since Tel Aviv’s first Pride parade in 1993, the event has grown in size and popularity year after year. It’s an exciting time for the LGBTQ community and others to experience rainbow-flag-decked streets, endless fun in the sun and the liberal spirit of Tel Aviv. 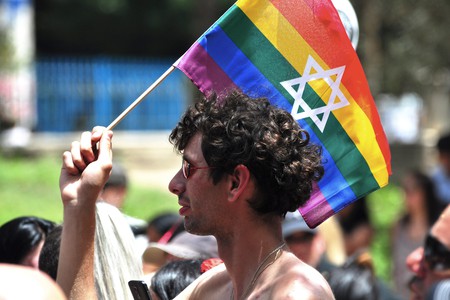 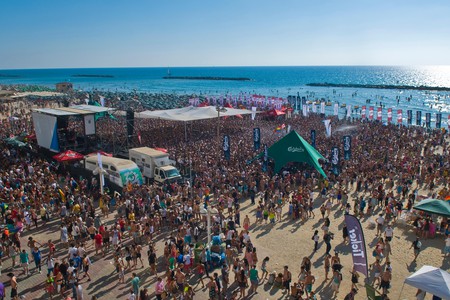