Top Ways To Find A Piece Of Brazil In Tel Aviv

Living abroad can be challenge. For Brazilians feeling a little homesick in Tel Aviv, here’s our guide finding a slice of home.

This exotic authentic berry from the Amazon Forest is already a popular super fruit worldwide. The original version of Açai (pronounced ah-sah-EE), eaten in Brazilian’s North regions, is bitter. However in Israel, it tastes deliciously sweet and is served with fruits and granola. Açai contains a high source of carbs and fats, ideal for before or after workouts. In Tel Aviv you can find the berry at several juice and smoothie stands, including the popular juice stand Tamara, served in a bowl with fruits and toppings. 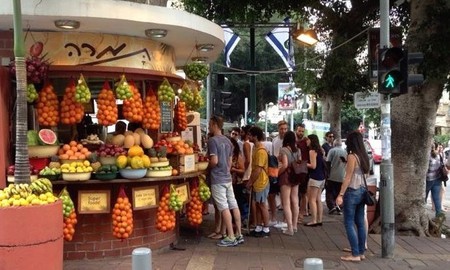 The pubs Na Favela and Samuca are run by Brazilians and located around the Tel Aviv area. According to owner Yuval Yonayoff, Na Favela Bar, located in Ramat Gan, presents a fun Brazilian favela vibe. Here you can find a menu full of tasty street food such as pão de queijo (a special cheese bread) and brazilian drinks like Caipirinhas. The Samuca bar is located in Jaffa, where Brazilian music shows can be seen every week. The bar’s partner Daniel Ring puts on performances from the Choro’s Club (choro is a type of Samba) twice a month on Friday mornings.

Brazilian martial art Capoeira combines acrobatic techniques and beautiful dance movements. Performed in a circle to the enchanting sound of percussion music, this activity was brought to Brazil by African slaves some time around the 16th Century. You can find Capoeira groups all over Israel, especially at gyms and studios. During the summer period, you can catch drummers and capoeira players performing at Tel Aviv’s Dolphinarium Beach. 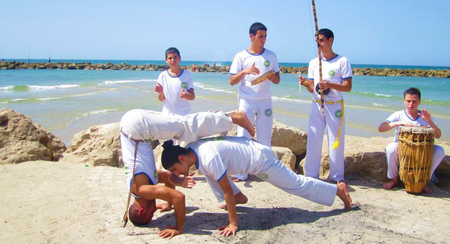 With over 13 kilometers of sand, Tel Aviv is also known as the ‘Mediterranean Miami’, and if there is one place where Brazilian people can feel at home, it’s the beach. Similar to Brazilians, Israelis also play a variety of beach-sports such as matkot (a paddle ball game), soccer and volleyball. 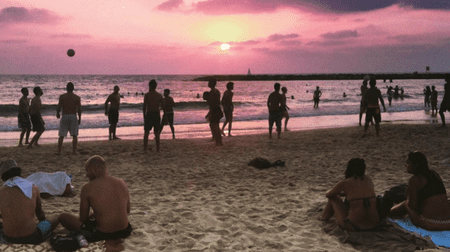 The beach in Tel Aviv | Cortesy of Dara Liberman

Music and dance are a tremendously important part of Brazilian culture. In Tel Aviv the styles and rhythms of Brazilian music are on offer in abundance. Singer Fernando Seixas began his musical career in Israel 20 years ago and is now launching his fifth album. Throughout the summer you can watch his amusing performance at Jerusalem Beach. Another Brazilian singer living in Tel Aviv is Paulinho Ferreira, who plays samba and choro with two different bands, Samba de Bambas and Mistura Brasil, as well as usually performing at bars in Jaffa and teaching music classes. At Samuca bar (mentioned before) you can listen to Sambadobom, which ‘provides an unique and authentic Brazilian musical experience to the public in Israel’.