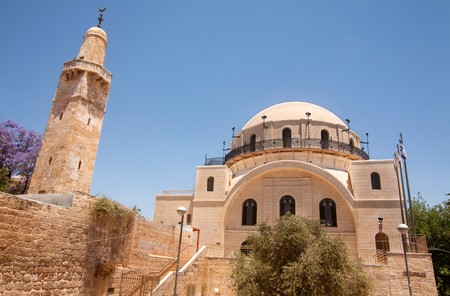 Church of the Holy Sepulchre | © Israel_photo_gallery/Flickr

When thinking about Jerusalem, one will inevitably imagine the shiny golden dome of the Dome of the Rock, the ancient Old City with centuries-old churches, and the famed Jerusalem stone that is the highlight of most buildings. But Jerusalem’s architecture is as vast and diverse as its history, and the city is filled with an incredible array of buildings that will thrill and inspire architecture enthusiasts, from the most amateur to the most advanced. Here is a list of ten of the most beautiful architectural wonders in Jerusalem.

Dome of the Rock

Typical photos of Jerusalem showcase the striking golden dome of this mosque, but there is much more to the Dome of the Rock than its dome. It was built at the order of Umayyad Caliph Abd al-Malik between 689 and 691 CE on the Temple Mount, or Al Haram al-Sharif, which is thought to be the site of the Second Jewish Temple. It is also the location of the Foundation Stone, which is a holy place for Jews, Christians and Muslims alike. The Dome of the Rock, heavily influenced by Byzantine and Roman architecture, is luxuriously adorned with 45,000 blue and gold tiles, painted wood, mosaics, carved stone, and carpets. The construction of the Dome of the Rock marked the emergence of Islamic style, especially with later additions by the Ottoman Empire, and retains most of its original structure and decoration. 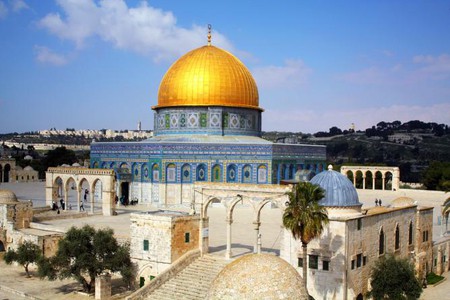 Dome of the Rock | © WikiCommons

Church of the Holy Sepulchre

Considered to be Golgotha, the place of Jesus’s crucifixion as well as his burial, the first church on this site in the present-day Christian Quarter is believed to have been built by Emperor Constantine I in approximately 325 CE. It has undergone destructions, reconstructions, and renovations throughout the centuries, but the Church of the Holy Sepulchre that stands today is mainly from the Crusaders’ reconstruction in 1149 CE. Only somewhat appealing on the outside, the truly eye-catching architecture is on the inside, with an interesting mix of styles including Romanesque, Byzantine, and Gothic. It also has Greek Orthodox, Catholic, and Armenian Orthodox influences, which is evident in the stunning ornamentation and artwork of the numerous chapels inside. 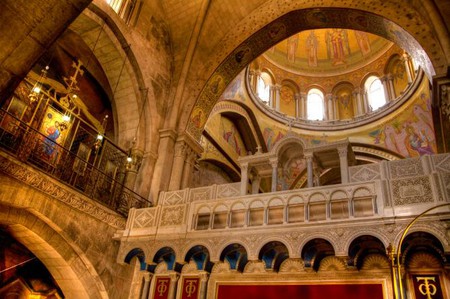 Church of the Holy Sepulchre | © WikiCommons

The Hurva Synagogue, or ‘The Ruin Synagogue,’ newly rebuilt in 2010 in the Jewish Quarter of the Old City, was originally founded by followers of Yehuda Ha-Chassid in the early 1700s, only to be destroyed in 1721, and then rebuilt in 1864 by the Perushim, disciples of the Vilna Gaon. It was Jerusalem’s primary Ashkenazic synagogue, as well as the tallest Jewish landmark in Jerusalem, until its complete destruction in 1948 by the Arab Legion. It wasn’t reconstructed until 2010 by architect Nahum Meltzer, who rebuilt it in the original 19th century style with the intention of recapturing the old synagogue’s glory and extravagance. A beautiful domed synagogue designed in the neo-Byzantine style, it is said to be in competition with the Dome of the Rock. 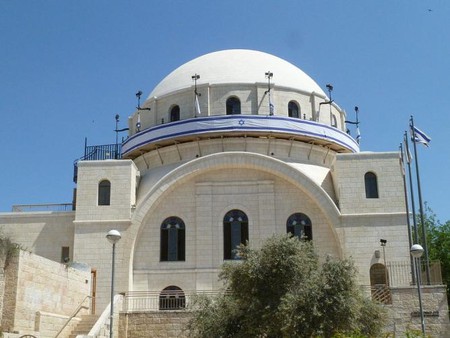 You can’t miss this towering gem on King David Street. Designed by the architect Arthur Louis Harmon, designer of the Empire State Building, the YMCA was built with a vision of peace and unity among people of differing religions and politics. The building was intended to pay homage to early Jewish, Christian, and Muslim architecture, and combines a unique blend of Byzantine, Gothic, neo-Moorish and Romanesque architecture. The Islamic and Christian elements are particularly evident in the ceilings of the main lounge, as well as the large dome and arabesques in the entrance hall. Don’t just walk by – go inside and see one of the most beautiful YMCA buildings in the world! 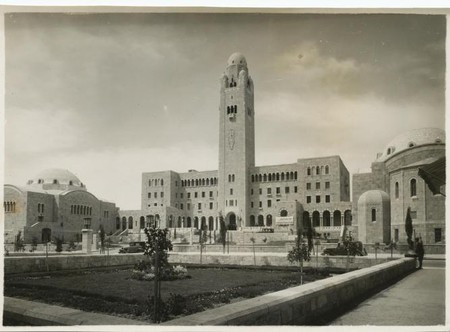 For the Bauhaus lovers out there, this one’s for you. Designed in the 1930s by renowned architect Leopold Krakauer, this white concrete house was built for a physician’s family in Rechavia in the center of Jerusalem. The flat roof and narrow window are signatures of the Bauhaus, or ‘International’ style, and this is one of only a couple dozen Bauhaus buildings in Jerusalem. The building is now a branch of Bank Leumi. 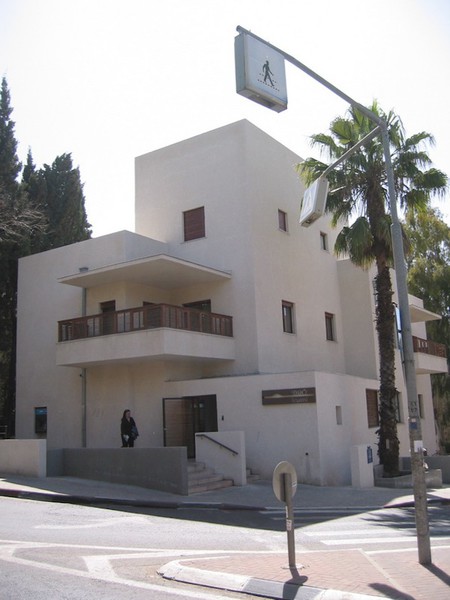 After the Six Day War, the Housing Ministry sponsored the construction of neighborhoods in the newly conquered territories. They desired distinctive local perspectives and designs, supporting the work of architects such as Ram Carmi and Abraham Yask, putting them in charge of creating new neighborhoods for Jerusalem. Ramot was one such neighborhood, which modernist architect Zvi Hecker had a hand in designing in the 1970s. Hecker’s Ramot Polin neighborhood is home to the apartment complex that has been labeled one of the strangest buildings in the world – and at the very least, it is definitely provocative. Hecker, inspired by geometrical shapes, created the apartment complex that is casually referred to as a ‘Beehive,’ or ‘Beehive apartments,’ and it is viewed as a controversial and overstated piece of architecture. 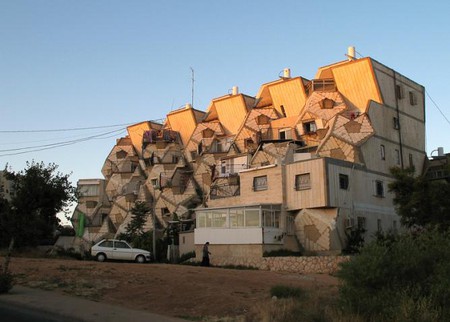 Hailed as one of the most renowned pieces of Israeli architecture, the Supreme Court complex in Jerusalem was designed by Ram Karmi and Ada Karmi-Melamede, brother and sister architects who won a competition to design it. It comprises of three main sections including a square library wing, a rectangular administrative wing, and a courtyard wing, all situated around a series of courtyards. The architectural influences range from Herodian to modern, and the building experiments in many contrasting angles, lights, and materials. Though it is a functioning public building, it offers guided tours in many languages. 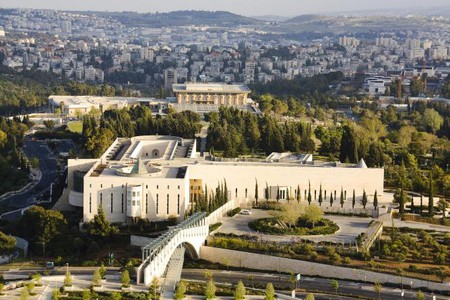 Safra Square, the location of Jerusalem’s city hall, began construction in 1988 with the help of Jewish philanthropist Edmond Safra, in honor of his parents, Jacob and Esther. Built near the old British municipal building, the new municipality blends Post-Modern architecture with more traditional Mamluk style, using smoked glass, steel, and interchanging bands of red and white limestone. Below ground level, many old 19th century public and private buildings are interconnected with new buildings. The square itself is used for events and activities, and is lined by palm trees. 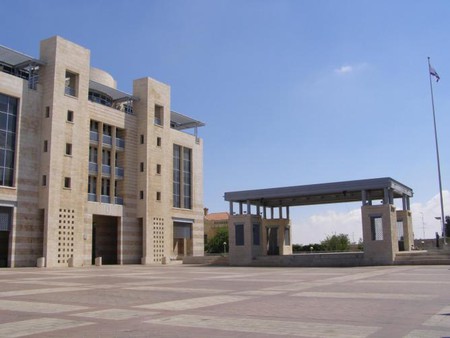 Designed by Spanish architect and engineer Santiago Calatrava, the Bridge of Strings, also known as the Chords Bridge, is used by Jerusalem Light Rail’s Red Line and one of the first noticeable structures upon entering on the western side of Jerusalem. The most prominent feature of the bridge is the 118-meter mast that is bolstered by 66 cables, which lends it the appearance either of King David’s harp, which was Calatrava’s intention, or in others’ eyes, an arrow in a bow. It is built mainly of Jerusalem stone, with trimmings of glass, steel, and concrete, and is the tallest structure in Jerusalem. 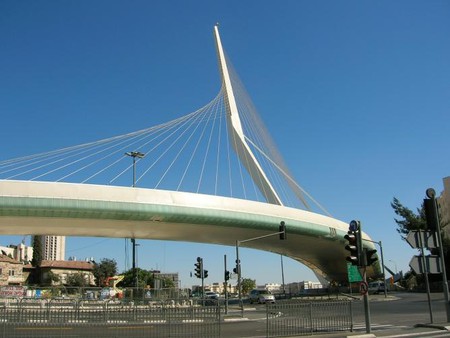 Israeli-Canadian architect Moshe Safdie, a distinguished architect in the world and particularly in Israel, designed Beit-Shmuel in 1986 as the headquarters of the World Union for Progressive Judaism, and in 2011 added the more luxurious part of Mercaz Shimshon, which is home to luxurious guesthouses and a banquet hall. The Mercaz Shimshon-Beit Shmuel complex has a number of functions which span the educational and cultural fields, containing hostel rooms, classrooms, administrative offices, a banquet hall, and a theater. The banquet hall, located on the building’s roof, has a glass dome with a panoramic view of the Old City and can be seen from the walkway to Jaffa Gate.