The Most Unique Experiences You Can Have in Israel 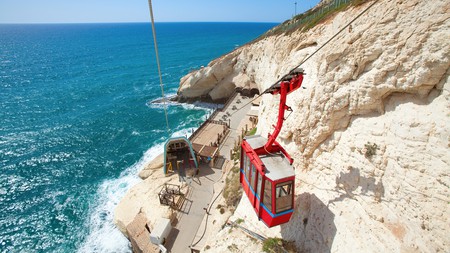 Israel has much more to offer visitors than Tel Aviv’s beach and Jerusalem’s religious sites. It is a country full of natural beauty, curious yet wondrous sites in desert and urban landscapes, and diverse, fascinating cultures to explore. For those keen to escape the proverbial beaten track, this collection of unique Israeli experiences is for you.

The Israeli offshoot of Burning Man, perhaps the craziest, most unique festival in the world, Midburn takes place annually in Israel’s Negev Desert. A five day event where all social norms are abandoned and creativity and self-expression pursued without limits, Midburn is sure to be an unforgettable (and at times overwhelming) experience. 2017 saw the sixth edition, with 10,500 people flocking to the Negev.

So you’ve seen the Western Wall, wandered through the Arab markets, and stood over Jesus’s tomb in the Church of the Holy Sepulchre – now what? Well, underneath Jerusalem’s Old City, away from the relentless heat from its intense atmosphere and scorching sun, lie ancient tunnels, remnants of a 2,000 year old Jewish city. Weaving through the Western Wall Tunnels and Zedekiah’s Cave will leave you mesmerised.

Located in the north west of Israel, just a stone’s throw away from the border with Lebanon, these enchanting geological formations are one of the most unique sites to visit in the country. Take the steepest cable car in the world down and explore on foot the mystical grottoes and caves surrounding pools of glistening turquoise water.

Camp under the stars at the Makhtesh Ramon crater

Labelled by many as the Israeli Grand Canyon, the Makhtesh Ramon Nature Reserve is the largest protected area in the country and definitely its best for stargazing. Popular with locals and tourists alike, this is one of Israel’s most breathtaking experiences. For the more adventurous, activities such as hiking, cycling, horse-riding and abseiling – not to mention sunrise jeep tours – are also available.

A unique if not slightly extreme activity, these salt caves are one of Israel’s best kept secrets. Tucked away near the Dead Sea in the Judean Desert, the caves are reached by abseiling down over 60 meters. Inside, you’ll duck, crawl and slide through narrow gaps and be awestruck by the stunning salt stalactites and stalagmites.

Take a nighttime jeep safari in the Negev Desert

Lovers of the outdoors and nature, rejoice, for this is the desert adventure for you. Take a jeep tour (Tourist Israel are recommended) with an animal behaviour expert and keep your eyes peeled for wolves, hyenas, desert foxes, porcupines, ibexes, bats, owls and, if you’re very lucky, one of the few remaining Arabian leopards.

Float in the Dead Sea

One of the most well known but nonetheless totally unique experiences in Israel, a trip to the Holy Land is incomplete without floating in the Dead Sea. Not only is it the lowest point on earth, it is also one of the saltiest bodies of water in the world. Make sure you lather yourself in its natural, skin-smoothing mud and replenish yourself with the water’s healing properties.

Take a jeep tour of the Judean Desert

Located between Jerusalem and Jericho, the Judean Desert is smaller than the Negev but nevertheless contains numerous hidden gems. From ancient monasteries built into jagged cliffs, such as St. George and Mar Saba (which is, remarkably, still inhabited by 20 Greek Orthodox monks), to the stunning Wadi Qelt nature reserve which also contains the world’s oldest synagogue, touring this desert is a must for those looking to head off the beaten track in Israel. Abraham Tours are highly recommended.

Located in the east of the Negev Desert, the Arava region boasts a diverse and fascinating range of attractions, including breathtaking hiking trails, a farm that is home to hundreds of African Nile crocodiles, and Timna Park, home to the world’s oldest copper mine and staggeringly beautiful natural rock formations. Make your visit to the Arava a truly unique experience by staying in Bedouin accommodation, such as Spice-Route Khan which also boasts natural thermal pools.

This UNESCO World Heritage Site in Ashkelon, central Israel, is home to a staggering 480 caves. Throughout their 2000 year old history, these caves have been used for a wide range of reasons, ranging from burials to stables to hideouts.

A stark contrast to the aforementioned desert adventures, wandering the streets of Mea She’arim is nonetheless a unique, if not jarring experience. Upon entering this neighborhood, one of Jerusalem’s oldest that is home exclusively to ultra orthodox haredi Jews, you’ll be greeted abruptly by a bold sign asking visitors to dress modestly. This area feels like a different world, and is certainly worthwhile to explore for those curious about Israel’s ultra religious haredim.

For those who are curious to know what being blind is like, this remarkable exhibition in Holon, just south of Tel Aviv, is a unique and meaningful experience. Upon starting your tour, the door closes behind you and you enter absolute darkness. A blind or visually impaired guide then leads you through a series of real life simulations, from walking through a park to riding on a boat, finishing in the real cafeteria where you can buy and eat snacks in total darkness.

Not many people know about this intriguing and at times eerie building in southern Tel Aviv. Originally built as a mall, it consists of an eclectic mix of shops representing a melting pot of cultures, from Filipino to Eritrean to Russian, along with quirky and surprising features, including a theatre, a Yiddish museum home to over 50,000 Yiddish books, a bat cave, and a graffiti exhibition. For a tour, CTLV come recommended.

Lose yourself in a nature party

Nature raves are a truly unique Israeli experience with a history going back decades. Comparable to underground raves in the UK and USA, they take place in forests, secluded beaches, and deserts, with revellers dancing the day or night away to psychedelic trance music.