The Legacy of an Israeli Prime Minister: Ben-Gurion House

Every Israeli schoolchild learns three facts about David Ben-Gurion: on May 14, 1948 he declared the independence of the state of Israel and became its first prime minister; he could stand on his head, and when he retired he left Tel Aviv for the remote Negev settlement of Sde Boker, where he spent his last days. Fewer know, however, that before moving to the celebrated kibbutz, Ben-Gurion lived in an apartment in Tel-Aviv, and that he bequeathed the property to the city’s municipality. Culture Trip explores the legacy of the Prime Minister through this house. 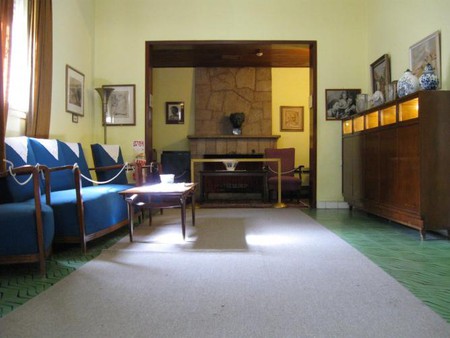 Beit Ben-Gurion stands on an eponymous boulevard, a minute’s walk from the beach, and is modestly separated from the street by a hedgerow. A thin flagpole and an understated plaque reveal the identity of the house, foreshadowing an atmosphere of a simple, almost Spartan lifestyle. Although the rooms may appear to contain incidental objects, nothing in this museum is: the interior shows that Ben-Gurion was a humble man who led by example.

The kitchen, located on the first floor, is a case in point. It is a small room that accommodates an undersized refrigerator, a stove, a sink, and several basic appliances flanked by a set of aluminium kettles and a kerosene lamp. The most colorful and elaborate item here is the juicer, whose jaws gape with comic menace. The sense of comedy, however, converts into awe and inspiration upon realizing that the very hand that pushed that juicer’s handle had also signed Israel’s declaration of independence.

Arranged on a table just outside the kitchen are objects including a coffee cup, a newspaper, a clock, and a radio. Again these are seemingly simple, everyday objects. In the context of the museum, they convey a sense of a robust working schedule characteristic of successful decision makers. For Ben-Gurion, the coffee, the newspaper, and the clock translated into energy, information, and order – the indispensable ingredients of a good day. Ben-Gurion’s charisma, distilled by history, hovers in this kitchen’s air and flows into the guest room, furnished more luxuriously. Clearly the prime minister didn’t wish to impose his habits on his visitors.

An Intellectual and a Visionary

The true luxury in this house is held on the second floor. Here a library of several rooms can be found and, according to reports, over twenty thousand tomes in different languages that include Latin and ancient Greek. Ben-Gurion was a polyglot and a polymath, a well-traveled man whose thirst for knowledge never subsided. His book collection reveals the extent of his intellectual breadth – and also of his sentiment towards Israel and its people. One of the largest sections in the library is dedicated to the history of Zionism and Israel, the state’s politics and conflicts, as well as it’s religions and traditions.

The second floor has more than a few busts, most featuring the distinctive, immediately recognizable coiffure that Ben-Gurion wore in his old age. The museum’s curators added these busts to represent the noble underside of vanity: a hard-earned pride in the state of Israel and the unshakeable conviction in the justice that it brought to the Jewish people. Ben-Gurion’s most memorable words, ‘We… hereby declare the establishment of a Jewish State in Eretz-Israel, to be known as the State of Israel’ continue to reverberate in this small, humble home – as they do in the State of Israel, the home of all Jews around the world.