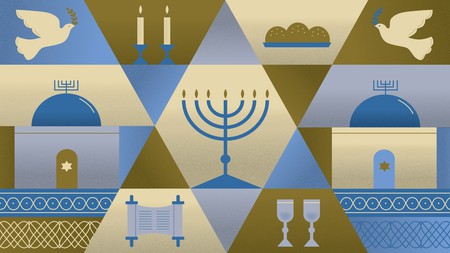 Israel is home to more than 6 million Jews, and while many share beliefs and practices, each Jewish community has its own unique traits.

Israeli Jews identify with one of four subgroups: Haredim, Datiim, Hilonim and Masortim. Each group has its own lifestyles, distinct social circles and ways of viewing the society they live in.

Haredim, commonly referred to as ultra-Orthodox, take their name from the Hebrew word hared – the one who trembles at the word of God. According to a Pew Research Center survey from 2016, approximately 8 percent of Israeli adults identify as Haredi, and out of the four communities, they are the most devout with almost all adults (96 percent) believing in the importance of religion in all aspects of life. The community relies on the advice of their rabbis to guide them through important decisions such as whom they should marry, where they should live and whether they should work or study.

A close-knit community, the Haredim socialise or marry within their own subgroup – arranged marriages are quite common – and avoid contact with the secular world, preferring not to watch television or use the internet. They have their own synagogues, yeshivot and community-driven organisations. They dress conservatively and modestly, favouring dresses, long skirts and wigs (if they are married) for women, and large black skullcaps, black hats or fur hats known as shtreimels for men.

Haredi culture holds in high regard men who dedicate their lives to studying Talmudic text in institutions known as yeshivas and kollels, and the government encourages the study of the Torah by paying them a small stipend. However, it is common practice for women to work to support their families.

Dati, originating from modern Hebrew, means modern Orthodox or religious. Although members of the Dati group are as religiously observant as the Haredim, they are not opposed to the idea of integrating into modern society and working secular jobs. Datiim make up 10 percent of adults in Israel, and nearly all of them believe in the existence of God.

Just like the Haredim, their community follows the Jewish law to the letter. They observe Shabbat, study the Torah, keep kosher and dress modestly like the Haredim, but the men wear skullcaps and the women cover their hair if they are married, though not necessarily with a wig.

The Datiim value career and success and world travel, and the men are more likely to serve in the Israeli military than are the Haredim.

The Masortim, whose name translates as ‘traditional [people],’ make up 29 percent of Israeli Jews and are identified as the country’s second largest group.

Out of the four groups, they hold the most diverse views and live between the boundaries of Orthodox and secular teachings, so while they may not conform to religious practices fully, they are more likely to follow Jewish laws and traditions compared with secular Jews. They will avoid non-kosher food, observe the separation of milk and meat in the kitchen and take part in traditional events such as bar mitzvah and brit milah. The men don’t always wear a kippa, and if they do, it’s mostly on Shabbat and during Jewish festivals.

While the Haredim and Datiim are united in their views of not using public transport during Shabbat, the Masortim are split on the issue, with 52 percent opposing the closure. They are also more likely to marry outside their group and maintain close ties with the other subgroups – ‘less than half of the Masortim’s close friends are from their own group,’ according to the Pew Research survey.

The Hilonim are the largest Jewish group in Israel, making up almost half of Israeli Jews. As the number of immigrants from European countries has increased, so has the number of secular Jews in Israel.

Their name comes from the Hebrew word hulin, meaning secular or mundane. While the majority of them share a secular outlook and consider Judaism to be about tradition, culture and ancestry rather than religion, about 18 percent of the community are certain in their belief in God. They observe Hanukkah and attend Passover celebrations but consider these to be cultural rather than religious events.

The Hilonim clash with the Haredim over the latter’s lack of participation in the Israel Defense Forces and for supporting stores’ closure during Shabbat. The Hilonim are also likely to marry someone from their group and socialise with people who share their views.

Although the Hilonim are proud to be Jewish and believe in a Jewish state, 59 percent say that they consider themselves Israeli first and Jewish second.