The Best Things to Do in Jerusalem 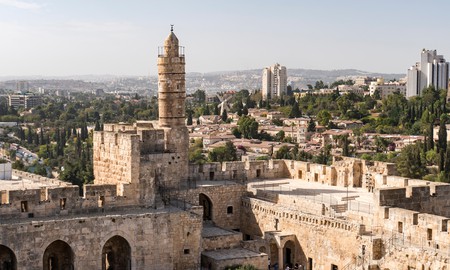 Hike along ancient ruins, explore some of the holiest sites in the Abrahamic faiths and experience one-of-a-kind Middle Eastern nightlife in Jerusalem. With all-night rock concerts and an annual marathon that attracts people from around the globe, Jerusalem offers far more than just old-fashioned sightseeing. Here are the best things to do.

Experience Jerusalem as part of Culture Trip’s epic seven-day Israel adventure, led by our Local Insider. You’ll visit the Old City, sample craft beer at Machane Yehuda Market and explore some of the holiest sites in the city.

Jerusalem is the most populous city in Israel and remains holy to Jews, Muslims and Christians. The high walls of the Old City date back more than 3,000 years, and the current walls are composed primarily of sections restored by Turkish ruler Suleiman the Magnificent in the 16th century. The Ramparts Walk is the path on top of the walls that used to serve as military fortifications and is now considered the best way to view the four neighbourhoods in the Old City: the Jewish, Muslim, Christian and Armenian quarters.

Two routes are available: one section of the Ramparts Walk leads from Jaffa Gate to Zion Gate and ends at Dung Gate and the entrance to the plaza, which is where the Western Wall – the holiest site at which Jews are permitted to pray – is located. This section provides rooftop views over the Jewish and Armenian quarters and the hills that surround the city.

The other section leads from Damascus Gate to Lion’s Gate, overlooking the Muslim and Christian quarters. At the end of each section there are stairs leading to the cafes and eateries of the Old City. Alternatively, head to the Muslim Quarter’s shuk (market) for traditional Arab treats from any of the many takeaway shops and coffee kiosks.

Pro tip: Don’t forget to carry water with you – the Ramparts Walk has no shaded areas – and wear comfortable walking shoes. The recommended time to visit is during the cooler months of spring or autumn, or in the morning hours during the heat of the summer. 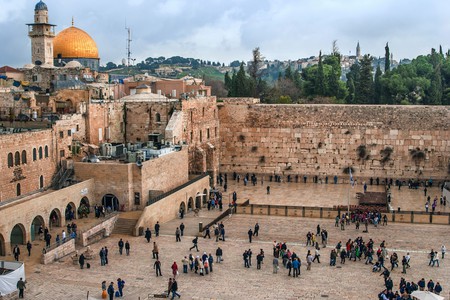 Explore the Christian Quarter along the Via Dolorosa route

Although the Via Dolorosa has attracted Christian pilgrims since the fourth century, the stone pedestrian route is still one of the best ways to visit the churches and chapels in the Old City. Follow the route with a tour, or by walking the Via Dolorosa alone, to understand the important role Jerusalem plays in the Christian faith. Among the must-see stops along the route are: the Church of the Holy Sepulchre; the Convent of the Sisters of Zion, a Roman Catholic convent near the Via Dolorosa; and the Ecce Homo Arch, believed by some to be the site where Jesus, sentenced to be crucified, was presented to the crowds by Pontius Pilate.

Pro tip: Time your visit to coincide with one of the traditional Friday afternoon processions along the Stations of the Cross to see re-enactments that bring the Christian Quarter’s history to life. 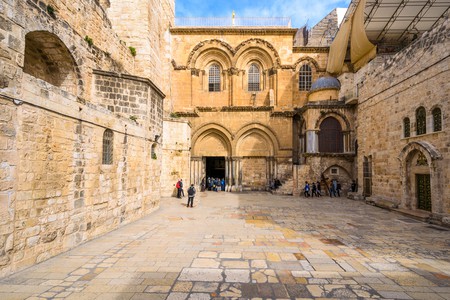 One of the most popular attractions in Jerusalem is the Western Wall Plaza in the Old City, which is busy at every hour of the day with people of all faiths praying, meditating or simply taking in this wondrous, ancient site. Many write a wish or a prayer on a piece of paper and leave it in one of the cracks of the wall. This is a spiritual and cathartic experience that can help them to refocus on what is important in their lives.

After leaving the Western Wall, venture into the Muslim Quarter to sip some tea in the Arab shuk. This open-air bazaar is also a great place to buy souvenirs, from ornate shawls to handmade leather sandals. From the Muslim Quarter or Jewish Quarter, head back towards the Christian quarter to visit the Via Dolorosa and the Church of the Holy Sepulchre, or on to the Armenian Quarter for St Mark’s Chapel and St James Cathedral, among many other religious sites.

Top tip: Modest dress for men and women is a must at the Western Wall, and all other holy sites, so take something to cover shoulders and bare legs upon arrival. 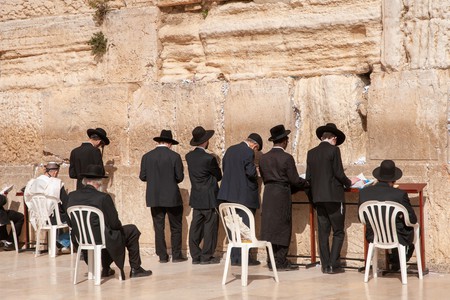 Orthodox Jews pray at the Western Wall, one of the holiest sites in Jerusalem | © Alex Segre / Alamy Stock Photo

The work week in Israel runs from Sunday to Thursday, so the Friday night revelry that is enjoyed in the rest of the world takes place on a Thursday night. The central outdoor market, the Machane Yehuda shuk, is one of the best places to experience Jerusalem’s nightlife. The shuk became a top nightlife destination back in 2011 after event producer Kobi Frig hosted a wild impromptu Purim holiday party here, which sparked the idea for the weekly Balabasta festival in the market during the summer months. The festival features live music, street performances and partying until the early hours. The Balabasta spirit remains alive on Thursday nights with live music and DJs outside the Freddy Lemon bar. Sip cocktails on tap at Hashchena and try kosher takes on popular street food at Crave. 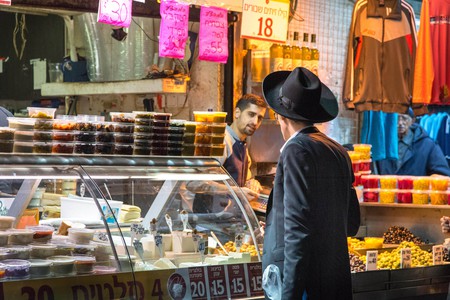 Light up the night at the Jerusalem Festival of Light

Over the years, the municipality has introduced new ways to experience classic Jerusalem attractions, among them the Jerusalem Light Festival. The annual festival, which takes place in summer, features state-of-the-art light installations across the Old City and attracts tens of thousands of visitors who stroll through the Jewish, Christian, Muslim and Armenian Quarters in the Old City to see light art projected onto the ancient stone structures.

Top tip: Enter the Old City from Jaffa Gate, and from there choose a starting point in any one of the four quarters of the ancient walled city. 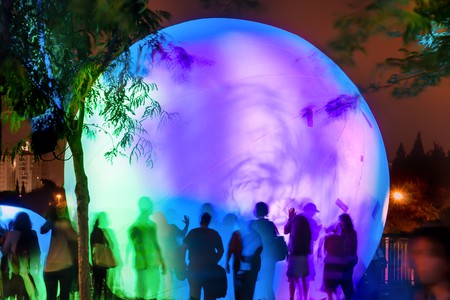 Mesmerising installations at the Jerusalem Festival of Light | © makarenko7 / Shutterstock

Whether you’re running the full 42km (26mi), jogging the 5km (3mi) fun run, or cheering on participants, the Jerusalem Marathon, an annual event held in March, is one of the most exciting events in the city. The race attracts top runners from around the world, dedicated hobbyists, and droves of locals who line the streets to encourage the participants. The streets along the route are closed to cars, providing a great opportunity to stroll through the Muslim and Jewish neighbourhoods.

Top tip: Stake out a spot near the finish line in Sacher Garden, where you can enjoy a picnic on the grassy hills and cheer on the runners as they complete the race. 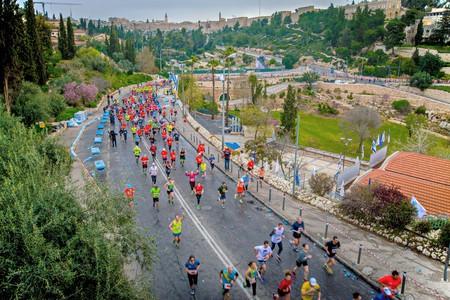 Although Sultan’s Pool was used in ancient times as a reservoir to bring water into the Old City, its dry bed is now the site of rock concerts and raves during the summer months. The views from Sultan’s Pool are amazing, especially at dusk, with the stone walls of the Old City on one side and the lush Valley of Hinnom on the other. When night falls, concerts in the pool swing into action with impressive light shows. 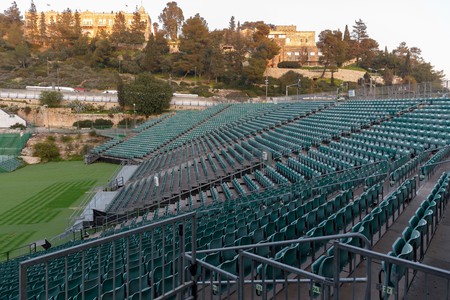 The Sultan’s Pool, an ancient reservoir that supplied water to the old city, is now used as a venue for concerts and festivals | © S1001 / Shutterstock

Not far from the Western Wall and open to the public, the City of David National Park offers tours through the same tunnels that were used to transport water from the Gihon Spring to the Temple Mount in biblical times.

Pro tip: The cool tunnels on this tour are a great option during the steamy summer months. Bring water-resistant shoes and a torch, as portions of the tour wind through darkened passages in which water reaches just above the knee. 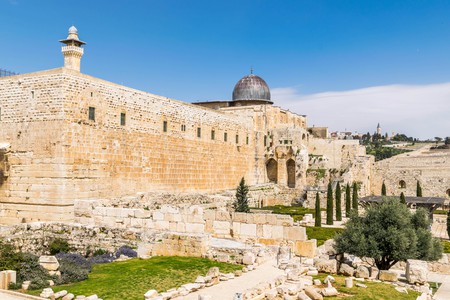