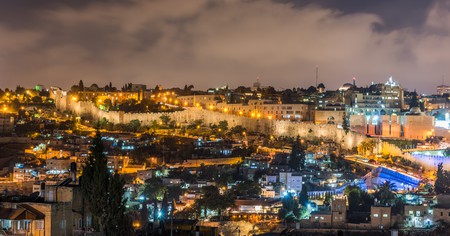 A city known for its historical and religious significance, Jerusalem has evolved into a cultural hub, playing host to thousands of live music performances by local artists and international acts every year.

Jerusalem has gone through a renaissance over the past 10 to 15 years. Live events and music venues are popping up all over the city, providing unique insight into the local art scene and a celebration of the city’s diverse communities. The Holy City, with its historical buildings, provides a rare backdrop to memorable performances by traditional Israeli musicians, symphonic orchestras, rock stars and jazz virtuosi.

Music Venue
Facebook
Email
Twitter
Pinterest
Copy link
Share
Map View
A well-known venue for live music in Jerusalem, the Yellow Submarine offers a space for Israeli artists to rehearse, record and perform. Founded in 1991 by the Jerusalem Foundation, a non-profit organisation that raises money to support local community projects and promotes Jewish-Arab coexistence, The Yellow Submarine has been fundamental in discovering and providing a platform for local artists. Although it is located away from the city centre in the Talpiot Industrial District, the venue is very popular and draws a big crowd for every performance. In addition to the rock, punk, alternative and Israeli live music performances, there are workshops, educational programmes and a free live jazz evening every Tuesday.
Open In Google Maps
13 Ha-Rekhavim Street, Jerusalem, Israel
+97226794040
Visit Website
Visit Facebook page
Give us feedback

Zappa is located in a disused 1930s railway warehouse just behind The First Station, the original station on the Jerusalem-Tel Aviv railway line that is now an open-air cultural and art centre. Part of the Zappa Group, a company that promotes and stages live music events and festivals across Israel, including Tel Aviv, Herzliya and Haifa, Zappa Jerusalem hosts regular jazz, rock and pop concerts by local artists, as well as tribute bands, stand-up comedy and private events. The kitchen at the club offers a kosher and vegan-friendly menu. The schedule is updated every week, and opening times might vary.

Music Venue, Shopping Mall
Facebook
Email
Twitter
Pinterest
Copy link
Share
Map View
The First Train Station is an event space that combines culture, leisure, lifestyle and music, hosting an eclectic variety of bands and shows throughout the week. On a spring or summer night, there is likely no better place to hear live music. Check its website for the weekly and monthly schedule. With restaurants, cafés, bars and outdoor markets scattered within the grounds of the centre, the First Train Station is the perfect location for eating, drinking, relaxing and watching great live performances. Deriving its name from Jerusalem’s original train station in which it is located, the venue still has the original train tracks that run across the grounds. There are also free public events and a free live jazz every Saturday at noon. A few nights during the week are dedicated to rock or folk bands.
Open In Google Maps
4 David Remez Street, Jerusalem, Jerusalem District, 9354102, Israel
Visit Website
Give us feedback

Theatre, Music Venue
Facebook
Email
Twitter
Pinterest
Copy link
Share
Map View
The Jerusalem Theatre is an arts complex with a gallery space and theatre, music and dance venues. The theatre, which opened in 1971, has four separate halls, ranging in audience size from 110 to 950 seats, and it showcases a variety of performances: films, dance performances, plays, musicals and children’s shows. It’s also a great place to watch live music performances. For those looking to catch a classical music concert, an opera or big band jazz, this is the place to go. The Jerusalem Symphony Orchestra performs here frequently during its season, which runs from September to June. The venue also hosts classical and jazz music festivals throughout the year, such as the Jerusalem Jazz Festival and the Jerusalem Piano Festival.
Open In Google Maps
20 David Marcus Street, Jerusalem, Jerusalem District, Israel
+97225605757
Visit Website
Give us feedback

A sports bar by nature, Mike’s Place offers musical entertainment from 10pm until midnight. Mondays are Open Mic Night and Tuesdays are for Band Night, an event that showcases musical groups that play rock, acoustic or alternative music. Wednesdays are reserved for ‘Jazzy Jamz’, an evening of free live jazz music. Strategically located in the centre of town on Jaffa Street, Mike’s Place offers plenty of seating over two floors, plus a pool table in the back and a stage in the front.

When big stars tour the region and come to Jerusalem, they perform at Sultan’s Pool. The venue is an archaeological site, once an ancient water basin renovated by Suleiman the Magnificent, the Ottoman Sultan who built the Old City of Jerusalem. Sultan’s Pool has become one of the most impressive, unique and beautiful places to enjoy a live show, especially during the summer, but fairs and festivals are also held regularly throughout the year.

This article is an updated version of a story created by Lior Kantor.