The Best Israeli Hip Hop Artists You Need to Know 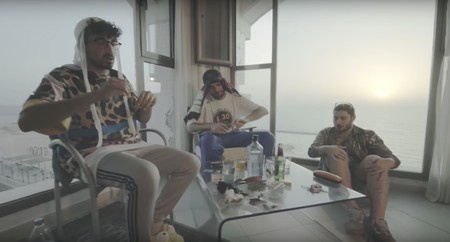 Israel’s burgeoning hip hop scene has made serious headway in the past decades and people across the world are starting to take notice. What started as a few kids in baggies who thought rapping in Hebrew was impossible, is now a diverse musical culture including people of Palestinian, Ethiopian and Russian heritage.

Nechi Nech – aka Ravid Plotnik – is the new “king” of Israeli hip hop. Famous for his intelligent flow, processional production and persistent hard work, this “white boy” – or “nechi” in Amharic – shows just how far natural talent coupled with sheer determination can get you.

Part funk big band, part hip hop troupe, the Hadag Nahash (Fish Snake) are as old as Israeli hip hop itself. Performing live for over 20 years, this Jerusalem-based band has earned itself a place of honor in Israeli music for their trailblazing originality and unwillingness to shy away from social and political issues.

The wunderkind of Israel’s African Hebrew Israelites community, Blackwell exemplifies the community’s unique mix of American culture and a Hebrew spiritualism. His style and skills are at an international level, but his content, in both Hebrew and English, is uniquely local.

The so-called Beastie Boys of Israeli hip hop, this power duo has released a number of albums and spearheaded a distinctly Tel Avivian brand of hip hop. Cohen, who is also a prominent Israeli hip hop producer, has recently signed on as a beatmaker for Stone Throw Records, one of L.A.’s hipper labels.

Like Nechi Nechi, KGC are part of a new voice of young urban Israelis who grew up outside of Tel Aviv, but unlike Nechi Nech, these two Ethiopian-Jews are themselves the children of immigrants and they bring with them a distinctly Ethiopian-Israeli style of music, drawing inspiration from the sounds of American hip hop as well as the Horn of Africa.

Caffe Shohor Khazak are the most successful of the new generation of Israeli hip hop artists of Ethiopian descent. They mix pop and hip hop to create a distinctly positive and local brand of music and the kids are loving it.

Tel Aviv never looked so bad – in the good way – as it does through the smoke drenched anti-rap of Swissa. A protege of Cohen @ Mushon and produced by Ori Shohot – Israel’s most prominent producer and the man many consider the godfather of Israel’s hip hop scene – Swissa and his crew are super cool and super stoned, creating a very contemporary type of hip hop previously unthinkable in Israel.

This amalgam of immigrants and genres is one of the most interesting creatures in Israel’s music scene. Part hip hop, part spoken word, part ska, rapping and rhyming in English, Hebrew, Arabic and Russian, System Ali defies definition in the best possible way.

Led by Tamer Nafar, DAM – or Dem Arabian MCs – is a group of Palestinian rappers who began in Israel and have since reached international acclaim, especially due to Nafar’s unapologetic engagement in politics and his skills as an actor, performer and public speaker.

Nothing says old school Israeli hip hop more than Shabak Samach – this band seemingly invented rapping in Hebrew on its own, giving the music both a childish and naive sound alongside an amazing amount of energy and originality.