The Best Hotels to Book in Israel 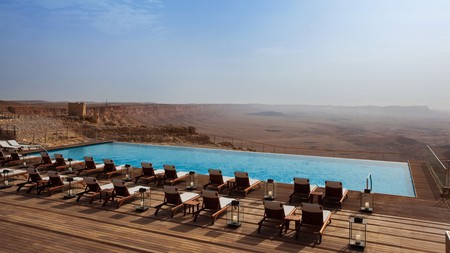 The beaches of Tel Aviv, the tranquillity of the Dead Sea, the holy sites of Jerusalem: if Israel isn’t on your radar yet, it should be. A Mediterranean climate and a thriving gastronomic scene add more reasons to visit, while an enticing selection of places to stay – including a former French hospital in Jaffa and a boutique hotel in an old Tel Aviv sewing factory – make a stylish base once you’ve touched down. Here are the top hotels in Israel, all bookable on Culture Trip.

Want to visit Israel but don’t have time to plan it all yourself? Culture Trip has you covered with our specially curated seven-day Israel adventure, featuring Jerusalem, Tel Aviv, Masada and the Dead Sea. 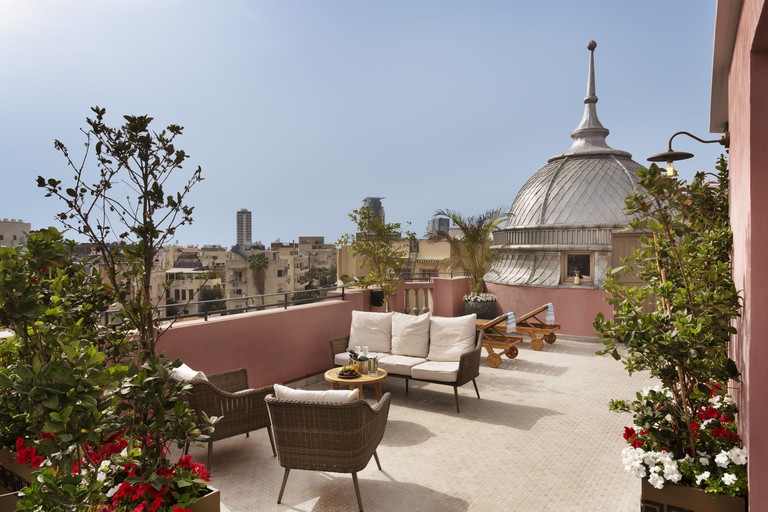 © Hotel Nordoy / Expedia
With an arresting dusky-pink facade and dome-topped roof, this is quite the local landmark. The Nordoy offers acute attention to detail, service with a personal touch and plenty of kitsch comforts – from a rooftop jacuzzi to help-yourself wine and a wood-panelled cocktail bar. Plus there’s Alexa, the resident cat, to show you around. The hotel was built in 1925 and sits in the cafe-dotted Nahalat Binyamin, one of the most vibrant streets in Tel Aviv – just a 10-minute stroll to the beach. 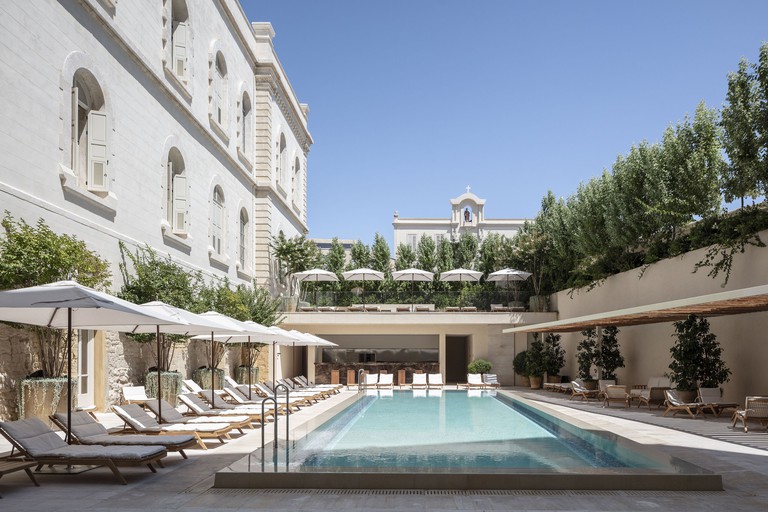 © The Jaffa, a Luxury Collection Hotel, Tel Aviv / Expedia
An impressive 19th-century neo-gothic and neo-renaissance building that was once Jaffa’s French Hospital, this hotel sits grandly on a hilltop overlooking the port. The 120 bedrooms are light-flooded and tranquil, and flank a gorgeous leafy courtyard. In the lobby, 13th-century relics sit alongside two Damien Hirst paintings – and from the front door, you can stroll to Shuk Hapishpeshim flea market and the Mediterranean coastline in minutes. 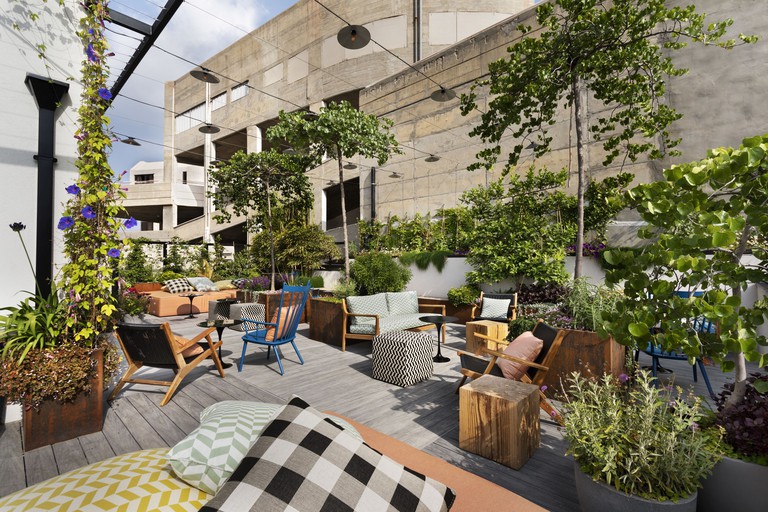 Courtesy of Fabric Hotel / Expedia
Fabric Hotel is hipster Brooklyn meets Tel Aviv – a super-cool boutique run by a youthful team on Nahalat Binyamin street. Housed in a former sewing factory, the 43-room hotel is all about industrial-chic design, colourful murals and mismatched furniture. The rooftop terrace is a plant-heavy highlight with nap-friendly daybeds, overlooking the hippest shops, markets and late-night hangouts in the city. Bushwick, the day-to-night lounge, serves killer cocktails and is named after the trendy NYC neighbourhood. 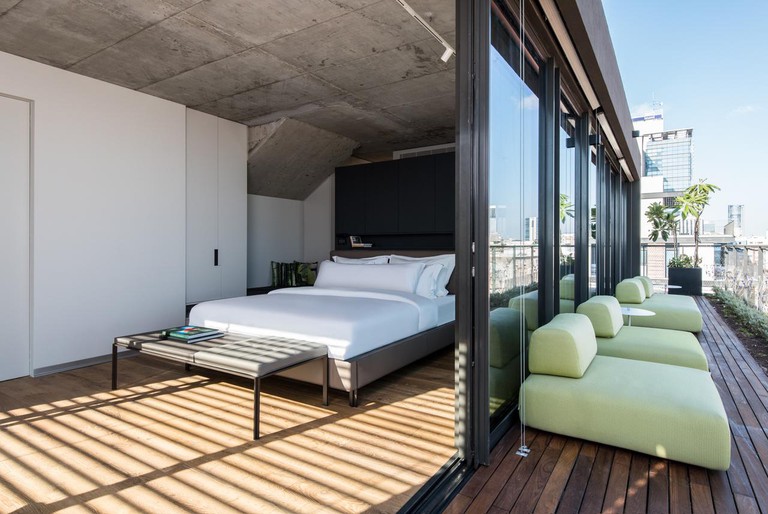 Courtesy of The Levee / Booking.com
This palatial 1913 villa was transformed into an ultra-contemporary aparthotel in the historic and hip Neve Tzedek district of Tel Aviv. The eight light-filled apartments come with home comforts, such as Egyptian cotton linen, Molton Brown toiletries, a Netflix subscription for evenings in and a kitchen with a bottle of wine chilling in the fridge. A five-minute saunter away, Rothschild Boulevard beckons with all its buzzy nightlife. 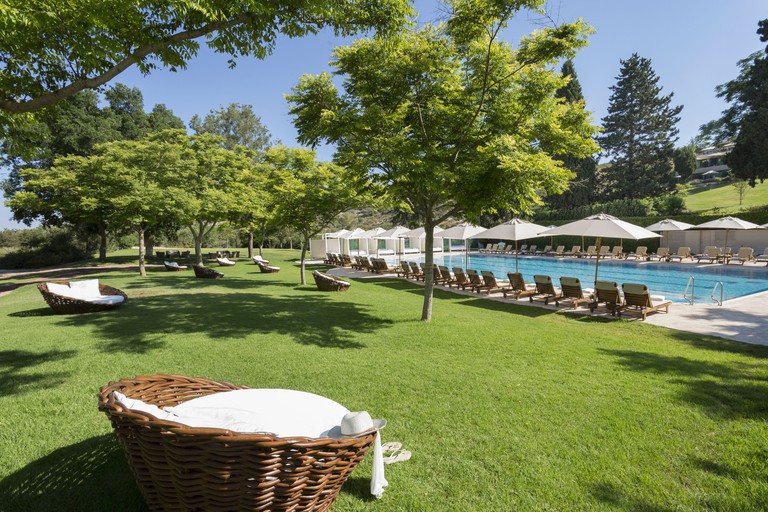 Courtesy of Carmel Forest Spa Resort / Expedia
For the ultimate escape into nature with some high-end pampering, Carmel Forest Spa Resort is ideal. The modern luxury complex is smack bang in the middle of a dense forest, and sits within a nature reserve not far from Haifa in northern Israel. Relax with laps in the gigantic outdoor pool and a range of excellent spa treatments – the spa itself has a Turkish bath, solarium and indoor pool. 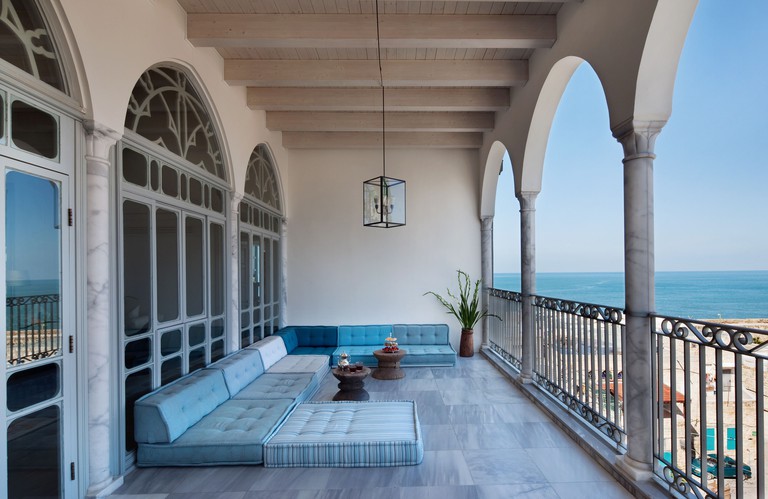 Courtesy of The Efendi Hotel / Expedia

On a picturesque street in the Old City of Akko (Acre) in northwest Israel, this 12-room boutique hotel overlooks the Crusader Walls and the Mediterranean Sea. It comprises two houses – now joined together and meticulously restored – that were built on the site of ancient buildings from the sixth and 12th centuries. The rooms are modern, and come fitted with king-size beds, marble-lined bathrooms and the finest linens. The hotel has a wine bar in the cellar and a restored 400-year-old Turkish hammam and spa. 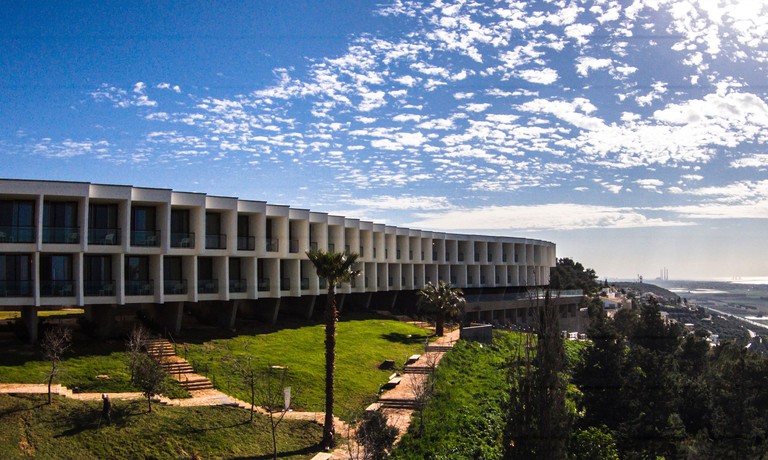 In the picturesque Zikhron Ya’aqov in northern Israel, this award-winning complex was designed by Israeli architect Yaakov Rechter in 1968, and transformed into a boutique hotel in 2005. Facilities include a concert hall, 750sqm (8,073sqft) of gallery space, indoor and outdoor pools, a spa and a restaurant. Elma has 95 modern rooms, each with original artworks, natural oak furnishings and stunning views of the Mediterranean. With a versatile event schedule that includes opera shows, concerts and plays, this luxury resort is recommended for culture lovers.

Mitzpe Hayamim is in the Galilee region, between the artist colony of Rosh Pina and the holy city of Safed (Tzfat). The hotel offers 97 elegant rooms and suites, extensive spa treatments, a swimming pool, an organic dairy and vegetable farm and two restaurants. Most rooms have a balcony or access to the garden, and some offer views of the Sea of Galilee (Lake Kinneret) and the Golan Heights. The decor is classic, with wooden floors and comfy upholstery. The restaurants – one of which is vegetarian – use produce fresh from the farm.

The Setai Sea of Galilee 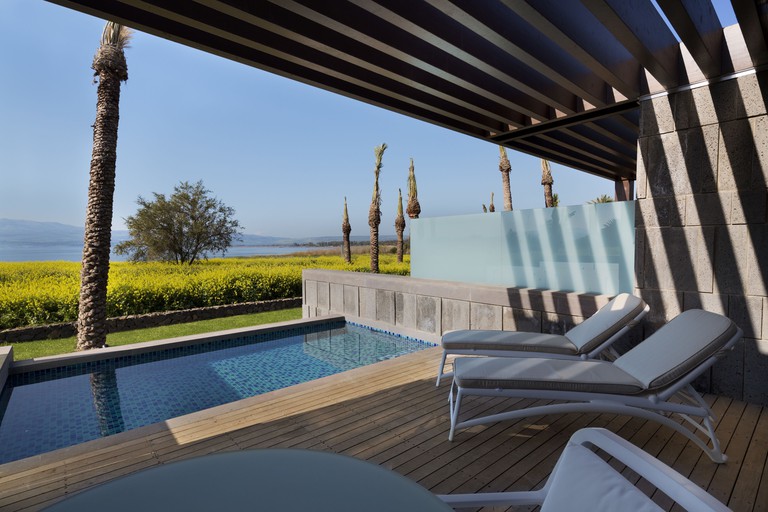 Courtesy of The Setai Sea of Galilee / Expedia

Perched on the eastern shore of the Sea of Galilee in northern Israel, this spa hotel offers 110 luxurious villas and suites, some with an infinity pool, a hot tub and views of the water. The hotel is home to the largest spa complex in Israel, complete with an indoor pool, Turkish bath, multiple treatment rooms and a fitness centre. The Setai is perfectly located for exploring the hot springs, parks and many trails around the Golan Heights. 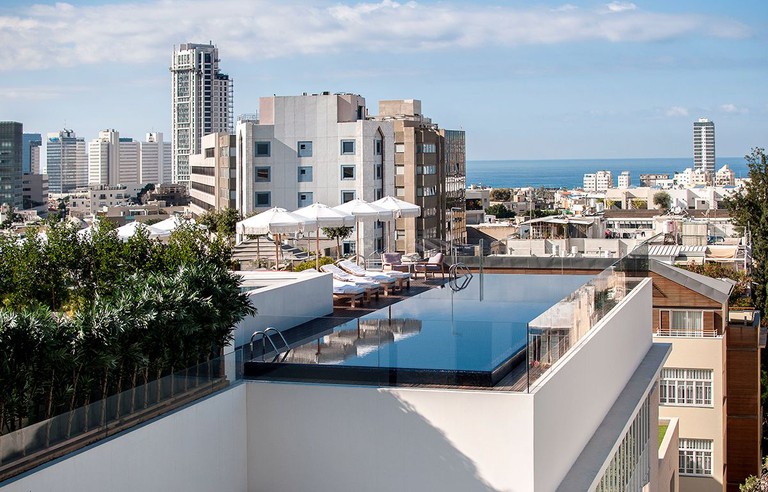 Since opening in 2014, the Norman has been leading the pack with luxury hospitality in Tel Aviv. Fifty rooms and suites are housed in two restored 1920s buildings that overlook King Albert Square, just off Rothschild Boulevard. The interior decor maintains some original period glamour with decorative inlaid flooring and soft hues. Walk around the citrus garden and plant-filled courtyard, or enjoy a drink at the Library Bar. There are two restaurants at the Norman: the Alena for a Mediterranean brasserie-style menu, and Dinings, a Japanese restaurant which also serves modern European dishes. 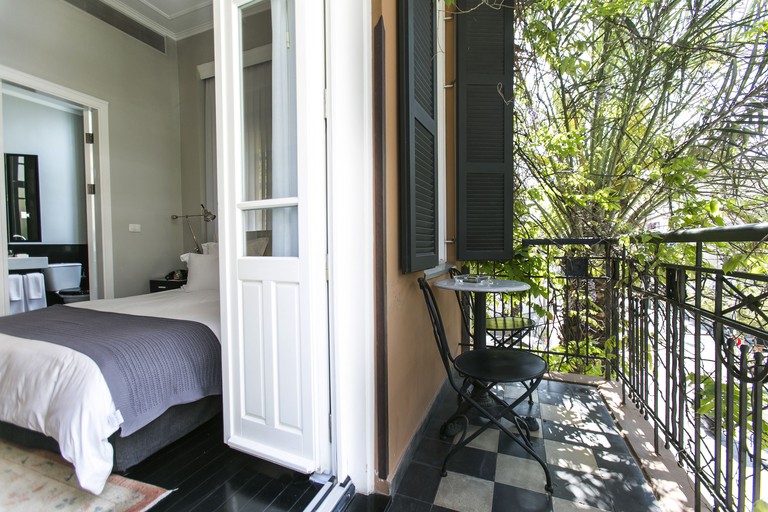 Courtesy of Hotel Montefiore / Expedia
In a restored Bauhaus building from 1922 just off Rothschild Boulevard, this boutique hotel promises art deco luxury and style. There are just 12 guest rooms over two floors, all elegantly decorated with dark wood flooring, whitewashed walls and marble bathrooms. There are books carefully arranged on shelves and vases of fresh flowers in every room. The restaurant is widely regarded as one of the finest dining spots in the city, and the superb bar serves a curated list of classic cocktails.

This popular hotel chain opened its Tel Aviv branch in 2017, and raised the bar for luxury accommodation in the city. A five-star urban resort, the Setai is set in a restored, historic compound that was once a fortress and an Ottoman prison. The hotel has 120 rooms and suites and a rooftop pool with views of the Mediterranean Sea. It occupies a prime location next to the Clock Tower in Jaffa and overlooking the ancient port. 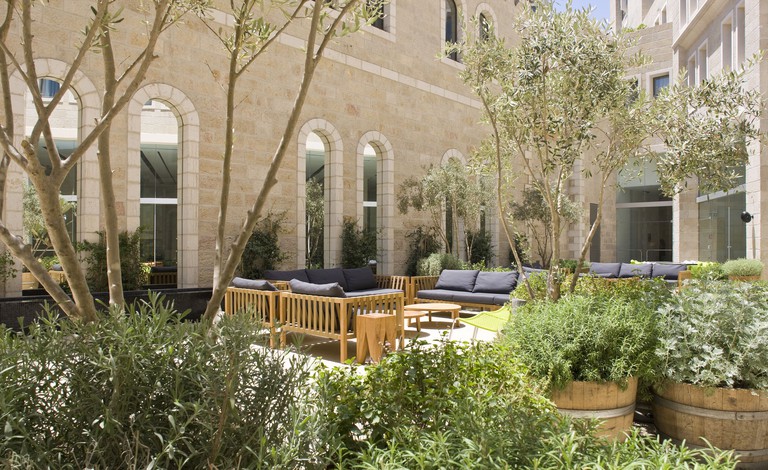 The luxurious Mamilla Hotel lies five minutes from the Old City of Jerusalem. The rooms are modern and chic, with pale wooden floors, crisp white linens and large windows that let in plenty of light. Choose from several dining spots, including an excellent fish restaurant overlooking the Mamilla shopping avenue, and relax at the rooftop area and bar – which offers magnificent views of the Old City walls. For some pampering, don’t miss the Akasha Holistic Wellbeing Centre, which offers a Turkish hammam and hydro treatments in a watsu pool. 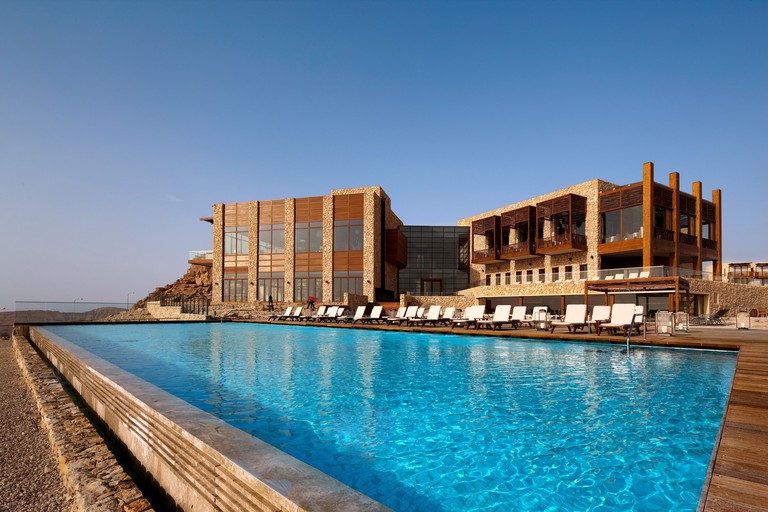 Built on 5ha (12.5 acres) on the rim of the Ramon Crater (Makhtesh Ramon) in the Negev Desert, Beresheet offers dramatic views of the 39km (24mi) natural phenomenon. The hotel features 111 one- and two-storey private villas, designed to maximise the spectacular views of the desert and blend in with the surroundings. All the rooms have private entrances, and 39 rooms have private pools. Some of the top-floor balconies have views of the desert or the crater. The Rosemary restaurant serves contemporary Middle Eastern cuisine with local wines.

Judy Cogan contributed additional reporting to this article.
Fancy discovering more plush hotels in Israel? Check out our pick of the best hotels in Jaffa, Tel Aviv’s vibrant port city, or these hotels in Haifa, now bookable with Culture Trip.