The Most Influential Israeli and Palestinian Artists in Jerusalem

Israel and Palestine’s most famous artists confront questions of identity and national culture through painting, sculpture, music and performance art. At the heart of it all stands the city of Jerusalem, which, thanks to its abundance of holy sites and its prestigious art academy, has transformed itself into a launch pad for many creatives.

Situated at a crossroads between Europe, Asia and Africa, Jerusalem has inspired modern and contemporary artists to develop their styles and techniques. Artists in the region are uniquely positioned to draw from a number of cultural and religious influences; some of the most prominent Israeli artists come from immigrant families who arrived in the Holy Land as refugees in the 20th century. They rely on a rich legacy of Jewish folklore and history in their work.

Conversely, on the Palestinian side of the city, artists must often confront a difficult political reality and explore their longing for lands or homes that were lost with the establishment of the state of Israel. These are the seven most influential Israeli and Palestinian artists in whose creative development Jerusalem has played a key role, and who have left an indelible mark on the art world.

Anna Ticho (1894-1980) was a Jewish artist who gained international recognition for her landscape drawings of Jerusalem and the Judean Hills. Born in Brno, then part of the Austro-Hungarian Empire but today located in the Czech Republic, Ticho studied at an art school in Vienna. In 1912, she immigrated with her mother and fiancé to Jerusalem, which was then under Ottoman rule. With stony mountains, olive trees and local figures from a bygone era, Ticho’s detailed watercolours depict the life and landscape of the Holy City in the early 20th century.

Her style evolved over the decades, from intricate graphite works like Olive Tree (1935) into abstract, almost surrealistic renditions of the Levantine landscape, such as Evening Landscape (1975). This pioneering Jerusalem artist also helped found the Bezalel Academy of Arts and Design, which would come to be a cornerstone for fine-arts studies and art production in Israel. Over the years, Ticho’s works have been exhibited in Vienna, New York and Paris. They are now on permanent display at the Ticho House on HaRav Agan in Jerusalem. 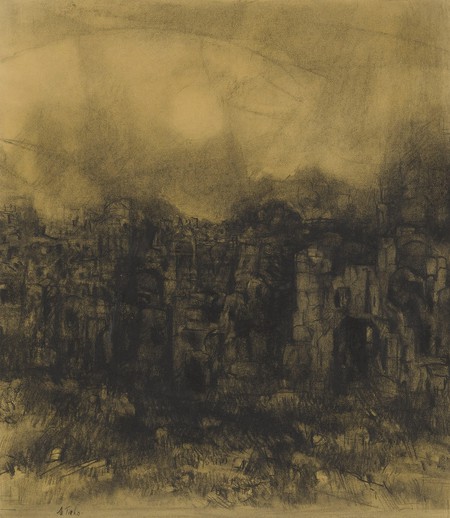 A pioneer in art and in Israeli society, Palestinian-Israeli artist Walid Abu Shakra (1946–2019) was born in the northern Arab-Israeli city of Umm al-Fahm and comes from one of Israel’s foremost families of artists. His brother Said founded Umm al-Fahm Art Gallery, one of the only galleries dedicated to showcasing contemporary Palestinian art in the country, while another brother, Farid Abu Shakra, found success as a painter.

In 1967, Walid Abu Shakra was one of a handful of Palestinians to study at an Israeli art school when he attended the Avni Institute in Tel Aviv. Though he would spend much of his life in London after immigrating there in 1972, Abu Shakra returned to Israel regularly to study the landscapes and the people. Many of his works are based on the landscapes of his childhood. Some of his best-known artworks are a series of prints titled Mintarat Al-Batten, after a prominent hill in the area around Umm al-Fahm. In 2008, Abu Shakra exhibited the series at a breakthrough show in Jerusalem’s Museum for Islamic Art, the first exhibition hosted at an Israeli museum to focus on contemporary Arab fine art. Today, Abu Shakra’s works are on public display at institutions around the world, including the Israel Museum in Jerusalem, the Tel Aviv Museum of Art, the Guildford House in England and many others.

Jerusalem-born Sigalit Landau, born in 1969, is a world-famous sculptor, video and installation artist. Through powerful theatrical installations using everyday materials and objects such as furniture, musical instruments, clothing and sugar, she has also become known for documenting her complex creative process in photographs. The themes of these works vary from social and ecological issues to questions of homelessness and the human body.

Among Landau’s most recognised works is a series of salt sculptures, videos and photographs connected to the Dead Sea. For this highly acclaimed series, over a period of 15 years, Landau submerged several objects – such as a ballerina’s tutu, a violin or shoes – into the Dead Sea, where they accumulated layers and layers of salt to create mind-bending, surreal sculptures. But it was really her experience of living in Jerusalem that helped launch her career, first via studies at the Bezalel Academy of Art and Design and later when Landau held her first major exhibition at the prestigious Israel Museum in 1995, creating an installation titled Temple Mount, inspired by the highly contested religious site. After this successful show, Landau would go on to exhibit regularly at major institutions across the globe. Her works are currently on display at the Israel Museum in Jerusalem, the Centre Pompidou in Paris, the Jewish Museum and the Museum of Modern Art in New York City, among other places. 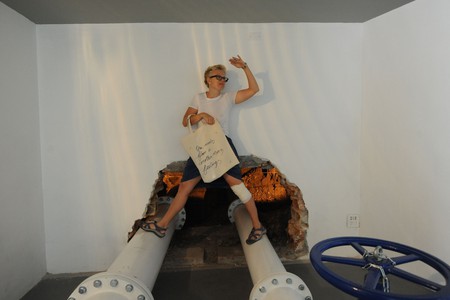 Coming from a famous Jerusalem family of musicians and artists, Jerusalem-born musician Ehud Banai, born in 1953, has been active since the 1980s. He combines elements of classic and alternative rock with various Jewish and Middle Eastern traditions. Many of Banai’s best-known songs are about Jerusalem, such as ‘Haknafeh Hametukah’ and ‘Rehov Haagas Ehad’, which are inspired by his childhood memories of wandering through the Machane Yehuda Market. Other songs explore Jewish and biblical themes. One album, titled Under the Jasmine Tree, focusses on Persian folk tales told by his father. In his youth, Banai travelled the world and performed at many venues before he became famous, including a six-month stint busking in London. He regularly holds concerts across Israel. With hundreds of performances and 10 albums under his belt, eight of which have gone platinum and two gold, Banai is one of the most influential musicians in Israel. 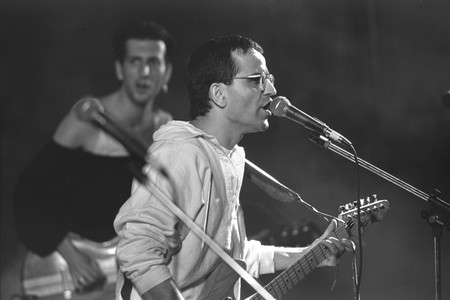 The Machane Yehuda Market in Jerusalem is at the heart of the city’s thriving foodie scene but has also recently transformed into a vibrant art gallery thanks to young British street artist Solomon Souza, born in 1993. Souza is famed for his colourful spray-painted depictions of well-known contemporary and historical Jewish and Israeli figures, visible on market shops’ metal shutters. Aside from honing his artistic skills at his London high school, Souza is self-taught and has dabbled in graffiti since he was a teenager. He was first commissioned by his friend Berel Hahn to paint the market’s stalls as a way of enlivening the area at night, when shops may be closed but bars and cafés open their doors. Former Israeli prime minister Golda Meir, infamous spy Jonathan Pollard and British philanthropist and Jerusalem-devotee Sir Moses Montefiore – Souza has so far completed more than 100 vivid portraits, turning a Jerusalem landmark visited by thousands daily into a living art gallery and a popular attraction for both locals and tourists. 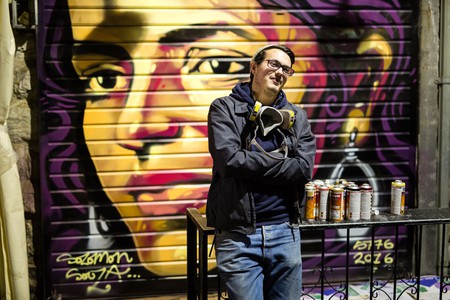 An award-winning actor, filmmaker and artist, Palestinian-Israeli Raida Adon refuses to be easily categorised. Born to a Muslim mother and a Jewish father in the northern Israeli seaside city of Acre, Adon studied art at the Bezalel Academy in Jerusalem and has had an enormous impact on Israeli-Arab culture. She has starred in several shorts, as well as the hit TV series Fauda (available on Netflix).

When she is not busy acting, Adon creates provocative video art, such as Woman Without a Home (2013), a work exploring her search for identity in relation to her Jewish-Muslim upbringing. This pivotal piece was shown at the Tel Aviv Museum of Art in Adon’s first-ever solo exhibition. Another video, Fasatine (2001), looks at the artist’s deep connection to the ghost village of Lifta. Located on the outskirts of Jerusalem, Lifta was once inhabited by Arab Palestinians until the 1947-48 Civil War in Mandatory Palestine, when many were forced to flee their homes. In the video, empty black dresses hang in the wind or float in dark pools of water, an eerie reflection of a place without inhabitants. Adon has held exhibitions around the world, including in Germany, Japan, the United States and France. Her videos are available to view on her website.

Known as ‘the painter of Jerusalem’, Moravian-born Israeli artist Ludwig Blum (1891-1975) emigrated to Mandatory Palestine in 1923 after having received a fine arts degree in Vienna and Prague. Blum became enamoured with the landscapes of Jerusalem and the desert, painting the Judean Mountains, the Western Wall and the Mount of Olives, among many other sites. His European-style renditions gained him international recognition thanks to his ability to capture Jerusalem’s distinct light at sunset and his detailed panoramas of the Holy City. In 1933, Blum’s painting Jerusalem received special mention from the Royal Academy in London. Today, his artwork is on view at several museums, including the Jewish Museum in Prague, the Israel Museum in Jerusalem and the Negev Museum of Art in Beersheba. 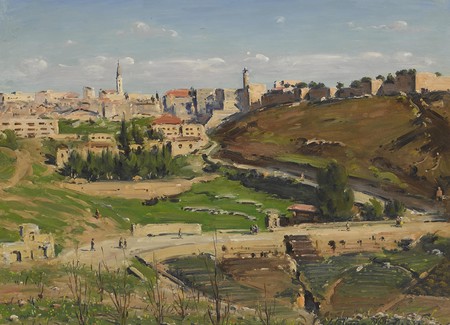 This article is an updated version of a story created by Naomi Lubash.