10 Spectacular Must-Visit Synagogues Of The World

Synagogues are not only spiritual places of assembly but, quite often, pieces of architecture that combine astounding beauty with stories of historical triumph. A synagogue is often at the top of a travel list for many cities all over the world, from Russia to Myanmar to Israel or the United States, so here is our list of the most spectacular synagogues from all over the world. 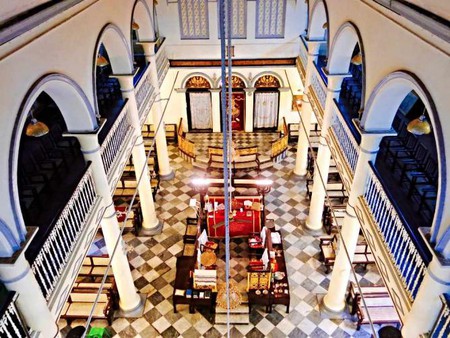 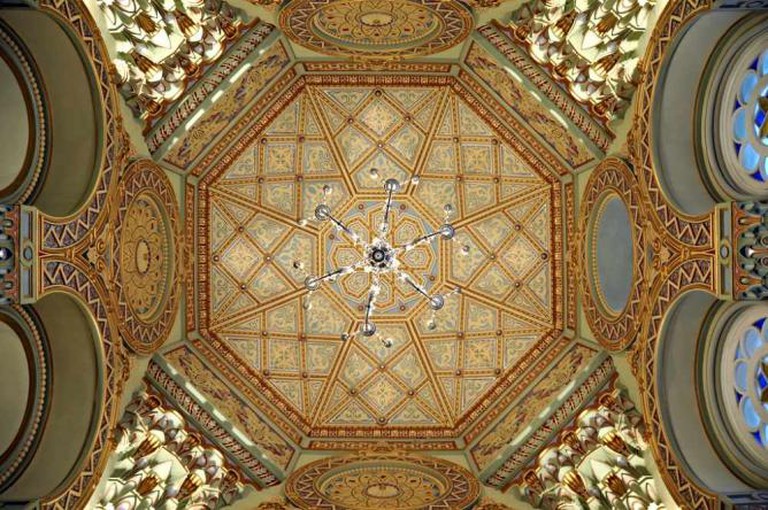 Grand Choral Synagogue | © Dennis Jarvis/Flickr
The Musmeah Yeshua Synagogue serves as a living dedication to the once thriving Jewish Community in Myanmar. In fact, it is the last remaining Synagogue in Myanmar. The current building was built between 1893 and 1896 by Iraqi Jews, replacing a smaller building built in 1854, and is still used for Jewish religious services today (serving the remaining 20 Jews in Myanmar). If you visit, the trustee Mr Samuels (whose son runs Jewish heritage tours of Myanmar), will most likely show you the two remaining Torah scrolls and take you upstairs to an opening in a small window, where you can see an unbelievable bird’s eye view of the high ceiling, memorial lamps, and beautiful wooden interior. Unfortunately, the future of the stunning Synagogue is uncertain given the small number of Jews in Yangon, so if you find yourself in Myanmar, make sure you visit.
Open In Google Maps
26th Street, Pabedan Yangon, Myanmar
+951252814
Visit Website
Give us feedback

The lavish Grand Choral Synagogue was opened in St Petersburg in 1893 and was recently restored to its imperial glory. The Synagogue is grand, allegedly the second largest in Europe, and has an impressive 47-meter high cupola and gorgeous sherbet coloring. You can take English tours of the Synagogue or visit during visiting hours to walk in the Greater Hall which holds up to 1,200 people or the courtyard with its mural of the Western Wall. After visiting the Synagogue you can also grab a snack at the on-site kosher restaurant, Le’Chaim, or visit the gift shop to purchase an adorable rabbi matryoshka.
Open In Google Maps
2 Lermontovskiy Prospekt, Sankt-Peterburg, 190121, Russia
+78127138186
Visit Website
Give us feedback 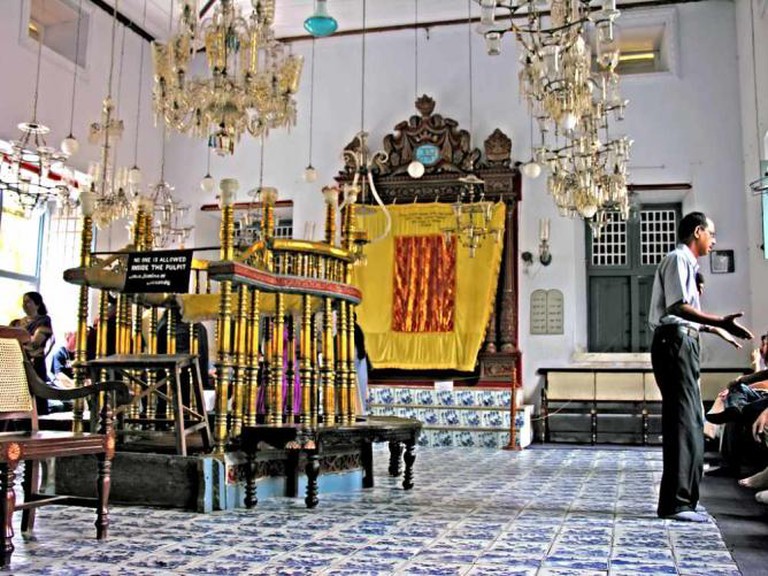 Paradesi Synagogue | Dennis Jarvis/Flickr
The Belz Synagogue in Israel is the biggest synagogue in the country. It’s modeled after the original Belz Synagogue which was in the Ukrainian town of Belz and was sadly destroyed during the Holocaust. Accordingly, the current Synagogue is both an awe-inspiring house of worship and a symbol of triumph over Nazi destruction. Like the original, the Synagogue in Jerusalem took 15 years to build and can seat up to 10,000 people. In fact, it’s ornate wooden ark with a capacity for 70 Torah scrolls is allegedly in the Guinness Book of Records. The nine chandeliers within the Synagogue are extraordinarily gorgeous, each one containing over 200,000 pieces of Czech crystal giving the sanctuary a ballroom like appearance. To visit the Synagogue and get a tour in English, you will need to book in advance.
Open In Google Maps
7 Binat Yisas'har Street, Jerusalem, Jerusalem District, Israel
+97225018900
Visit Website
Give us feedback 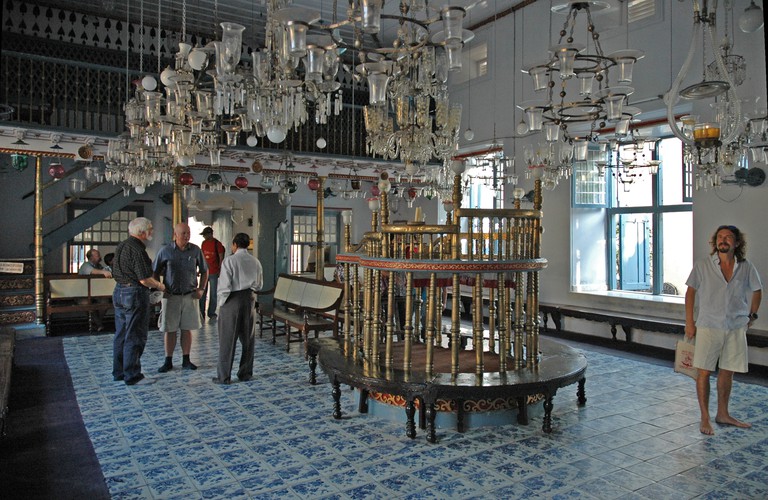 The Paradesi Synagogue is the oldest active synagogue in the Commonwealth of Nations, constructed in 1567 | © Wouter Hagens / WikiCommons
The Paradesi Synagogue is the oldest active synagogue in India and was built by Sephardic Jews following their settlement in India. The word Paradesi in several Indian languages means ‘foreigner’ which reflects the beginnings of the Synagogue. All visitors and worshippers to the Synagogue must enter barefoot, making walking on the beautiful hand painted ceramic tiles even more magical. The Synagogue is also filled with antiquities including an oriental rug, gold crowns and a teak ark which houses four Torah scrolls.
Open In Google Maps
Synagogue Lane, Jew Town, Mattancherry Kochi, 682002, India
+9118004254747
Give us feedback 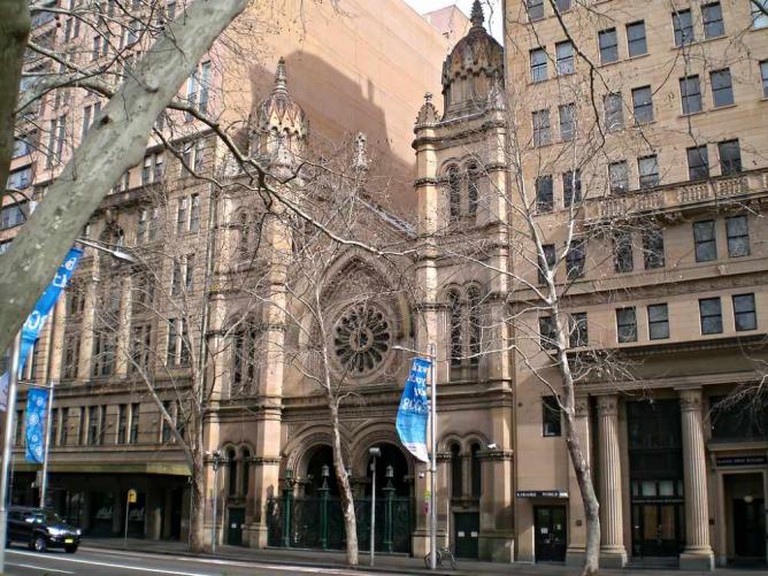 The Great Synagogue of Sydney | © BobMeade/Flickr
Ohel Jakob, ‘Jacob’s Tent’ in Hebrew, was designed by architects Rena Wandel-Hoefer and Wolfgang Lorch after they won a design competition in 2001. The Synagogue is a very modern cubic structure comprised of stone surrounded by a steel and glass cube. Not only is it beautiful but the glass encasing is symbolic of the tents used by the Israelites during the exodus. The interior of the Synagogue is also contemporary with clean cut wood and gold Hebrew lettering on the walls. The history of the Synagogue is equally as interesting as its design. The original synagogue which stood a few blocks away from the current one was destroyed in 1938 during World War Two. The Synagogue is now located in the new Jewish Centre which also houses the Jewish Museum and Jewish community center. The corridor, aptly called the Corridor of Remembrance, links both the Synagogue and the community center and commemorates nearly 5,000 Jewish citizens of Munich, who were murdered by the Nazis.
Open In Google Maps
18 Sankt-Jakobs-Platz, Altstadt-Lehel München, Bayern, 80331, Germany
+4989202400100
Visit Website
Give us feedback

The Great Synagogue of Sydney, Australia

For the unsuspecting traveler, the Great Synagogue of Sydney may easily be mistaken for a Christian cathedral and is arguably one of Australia’s most beautiful religious establishments. The Synagogue is located right in the city center of Sydney, showing off elements of Byzantine and Gothic architecture since its consecration in 1878. The Synagogue is beautiful both inside and out with a large Gothic inspired rose window and bold columns at the front and a dark blue ceiling adorned with golden stars on the interior. The Synagogue offers tours at noon on various Tuesdays and Thursdays of each month. The Synagogue is also involved in other cultural events in Sydney like the Sydney Festival, due to its beauty and incredible acoustics. 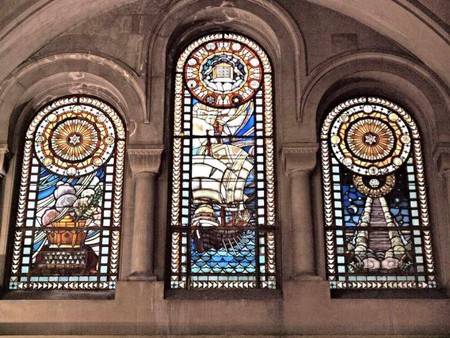 Argentina has the biggest Jewish population in South America and arguably, the grandest synagogue in downtown Buenos Aires, Templo Libertad, the Temple of Freedom. The Synagogue features a large Star of David on the front underneath a stone arch, inspired by Roman architecture. The interior features a high ceiling, a beautiful chandelier, gorgeous wooden seating and a red carpet. The diverse nature of Jews in Argentina today means that the synagogue runs two Shabbat services. A more traditional service and a liberal service aimed at its younger members. 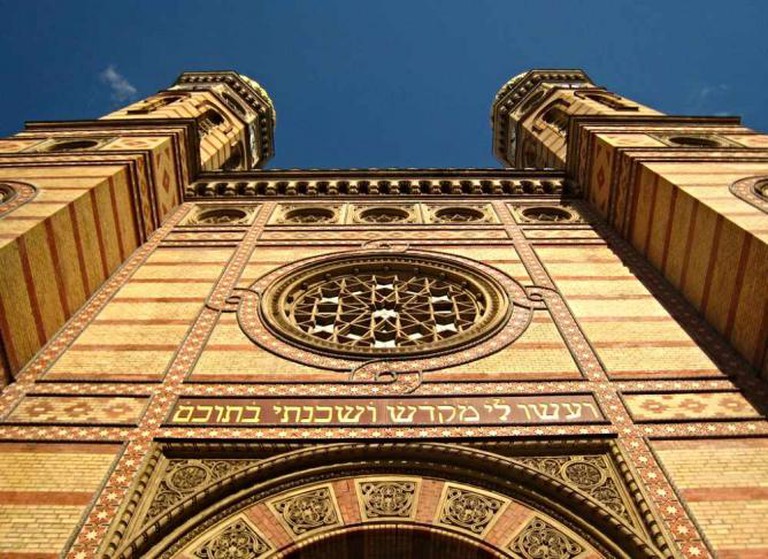 The Dohány Street Great Synagogue | © Hershil Shah/Flickr
For the hipster traveler, there is no cooler synagogue to check out than the Soho Synagogue in New York City. As with most things in Soho, the Synagogue looks nothing like a synagogue from the front forcing visitors and members to look behind the shop front exterior to find the place of worship. The Soho Synagogue brand is different from your traditional synagogue. They offer Jewish practice within a modern urban aesthetic, comfortably fusing the two together. The Synagogue itself is small with a tasteful menorah on the wall and Star of David at the front.
Open In Google Maps
43 Crosby St, New York, New York, 10012, USA
Give us feedback

The Dohány Street Great Synagogue is a real hidden treasure of Budapest. It features Moorish styled architecture with intricate brickwork, twin towers topped with onion domes and a large rose stained-glass window sitting above the main entrance. The interior is just as impressive, complete with gorgeous, colored internal frescoes of geometric shapes and a mechanical organ. The Synagogue Complex also boasts an impressive history. Theodor Herzl was born and raised in the small building that used to be located next to the Synagogue. This plot of land is now the Jewish Museum. The complex also has The Raoul Wallenberg Memorial Park, with the Memorial of the Hungarian Jewish Martyrs made by Imre Varga. A silver sculpture that resembles a weeping willow, whose leaves bear the names of 400,000 Hungarian Jews who were victims of the Holocaust. 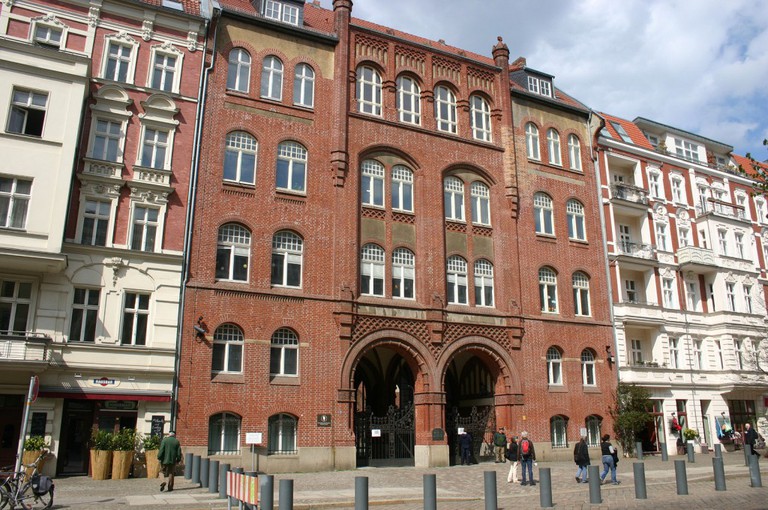 Rykestrasse Synagogue, Berlin | ©Goruma
The New Synagogue in Berlin was consecrated in 1866 and its architecture is heavily inspired by the Alhambra, a fortress in Granada, Spain. The dominating dome is covered with ornate gold-plated ribbed lattice and oriental motifs and more than 50 meters in height. The dome is also beautifully flanked by two smaller domes on the two side wings. The Synagogue was heavily damaged during Allied bombing in World War Two and subsequently, much of the original building was demolished and the Synagogue was only finally restored after the collapse of the Berlin Wall in 1989. Now the Synagogue is beautifully restored, with visitors allowed to climb the dome from April to September.
Open In Google Maps
28-30 Oranienburger Straße, Mitte Berlin, Berlin, 10117, Germany
+493088028300
Visit Website
Give us feedback
Give us feedback