Street Wise Hebrew with Guy Sharett, the urban culture tour deciphering Israeli street art and graffiti takes street art lovers alike on a unique tour of Tel Aviv’s Florentin neighborhood. Constantly changing, developing and adapting, this neighborhood is one to watch. Especially interesting, the Hebrew language through the writing on the walls. 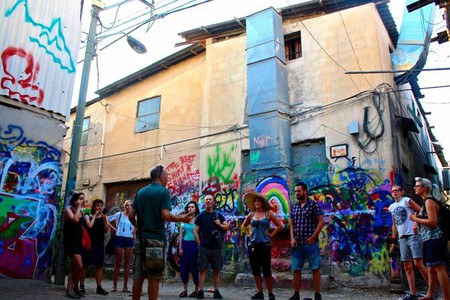 Florentin, a neighborhood in the southern part of Tel Aviv, was named after a Greek Jew named David Florentin, and was once a run down part of the City. Today, Florentin attracts a variety of young, urban, bohemian individuals, and is known for its vibrant walls that radiate the cultural climate of the city.

The tour is in English, which attracts an international scene. The tour is approximately an hour and a half and takes you to the most popular graffiti in the area. Sharett is an energetic and enthusiastic tour guide, with a white board and marker to explain and teach the meaning behind the Hebrew street art. Sharett’s street tour emphasizes teaching Hebrew slang for tourists and foreigners to use throughout their trip in Israel. 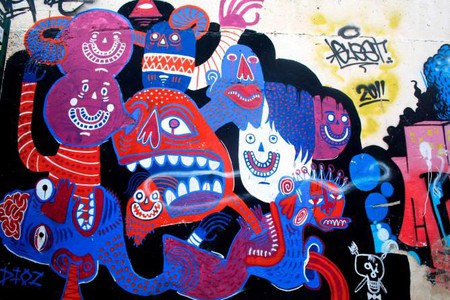 During the tour we saw artists such as DIOZ, who creates huge pieces that demand the audience’s attention, since his artwork covers the entire wall. He uses vibrant colors and abstract figures to portray distorted profiles. Compared to that of some of his colleagues on the street, his color and content is more lighthearted than some of their more politically driven pieces. 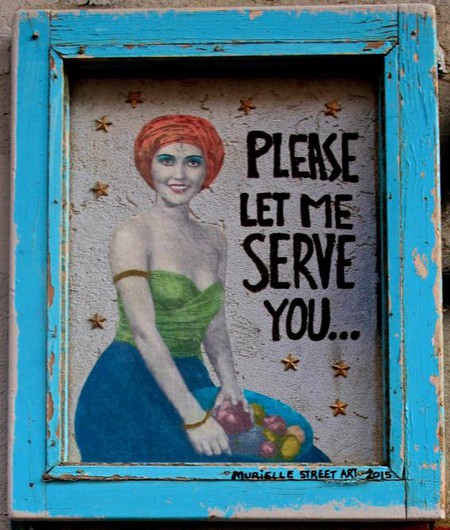 Dede is another artist who can be identified through his signature band-aids; unlike Dioz, Dede’s creations “promote a re-examination of personal and societal conventions.” His art is emotionally deep, rooted in such themes such as loneliness, belonging, alienation and the constant desire to escape reality. The urban landscape is a key component of Dede’s work, as he plays with the mural of Tel Aviv. 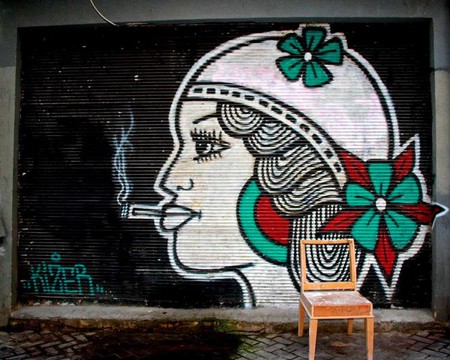 The beauty of street art partly lies in its ability to sustain different meanings for each piece. Sharett emphasizes this point, as every artist is inspired to create something personal which could be interpreted in many ways. Sharett explains further a concept called street art courtesy: if a smaller piece of art is already created, the next artist will preserve the original and incorporate their creation around it. 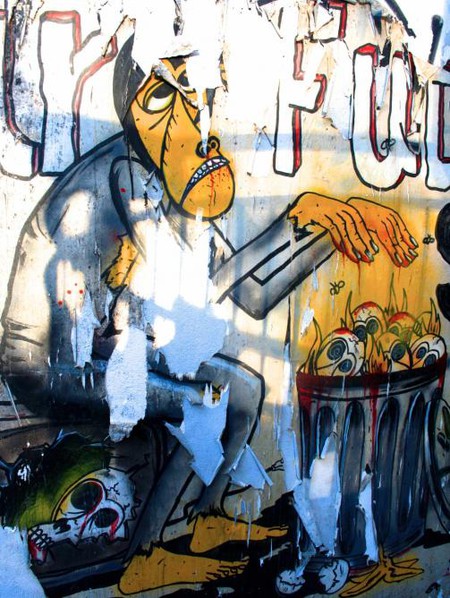 Wonky Monky is especially known for upholding this ethic of respect among street artists; he has both solo works and collaborative pieces with his peers. The monkey can be seen as the “allegory of the human condition in contemporary society.” He touches upon the concepts of boredom, hunger, sadness, violence, and more.

Sharett’s tours are interactive, fun and give you an insight into a hidden world. Sharett will also take you to small local businesses, for a peek at the Old Synagogue of Florentin, and for a chat with locals who’ve witnessed for themselves the changing backdrop of this dynamic urban neighborhood.