Spring Foods To Discover In The Galilee, Northern Israel 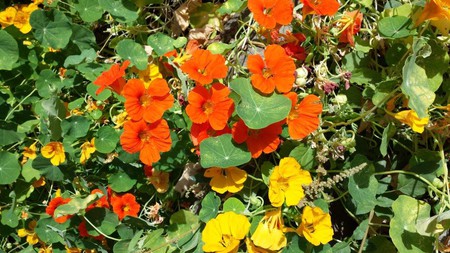 The first crops of springing across Israel is known to be a beautiful sight. We’ve rounded up the greatest spring foods that can be found in the Galilee in Northern Israel. 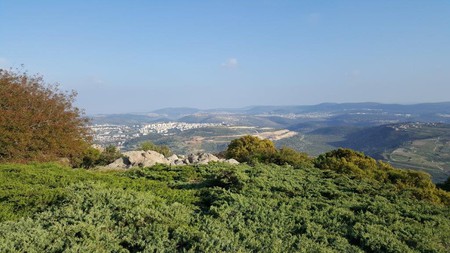 The lush, green mountainous range, separated into the lower and upper Galilee, is in the beautiful north of Israel. Undoubtedly at its best in spring when the saplings have matured into trees, the citrus groves are fragrant with fruits and wild herbs and edible flowers cover the land with loud bursts of color.

Israel is populated with a diversity of cultures, all bringing their traditional cuisine into the mix for all to experience. A world apart from the culinary capital of Tel Aviv where highly acclaimed chefs produce gourmet food as works of art on every plate, the food from the north boasts rustic, homey and freshly cooked dishes, straight from the ground.

April and May are considered to be the spring months in Israel, before the onslaught of the heat and humidity of the summer. The changing weather patterns are unpredictable in spring, yet still the Galilee is green and fertile with an abundance of produce that is grown and sold both locally and nationally, from farms and settlements across the Galilee.

Like spring in Israel, the season for fresh green almonds is short and elusive. The beautiful almond trees with their soft pink blossom are abundant throughout the Galilee, grown commercially in groves and strewn carelessly amongst the hills and valleys.

In the Arab village of Iksal, south of Nazareth in the Lower Galilee, is the voluntary, female-led, non-profit governmental organization (NGO) ‘Sindyanna of Galilee’, famous for almond groves and their abundant yields of the Um al-Fahem almonds. A fair-trade NGO where the concept of ‘business for peace’ ensures that all profits are channeled back into education for the women of the village and where the almond harvests are renowned for being the best in the country. 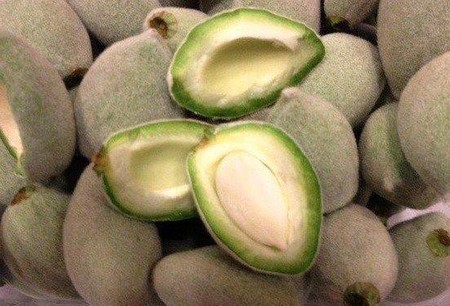 Subtle in flavor and with a delicate feel to the almond inside, the unripe nuts are picked when still in their infancy and while the skin is still pale green and furry in texture, well before the hard brown skin of the almond has had its chance to form.

Break into the casing, and you will find a smooth, yet soft, white almond with a grassy flavor that is eaten raw, dipped in salt, lemon juice or olive oil for extra flavor or scattered into fresh salads, either plain or lightly toasted. It’s often eaten whole as a sour fruit or sliced thinly through the skin, adding a very different dimension and texture.

Once the translucent spring gems have had their season, the almond hardens, and the green shell turns a soft brown and is sold in the Israeli markets by the sacks full.

Spring has arrived in Northern Israel when there is an abundance of the small, round green plums in shuks throughout the Galilee. A springtime treat, the sour green plums are picked purposefully early, before they have had time to ripen on the trees, leaving a sour note to the taste, yet still juicy and refreshing.

The size of large marbles, green plums are considered a healthy snack, as they are rich in fiber and vitamin C. Picked straight off the trees, it is customary throughout the Middle East to sprinkle salt onto the skin so that the balance between the salty yet sourness of the plum excites the palate. 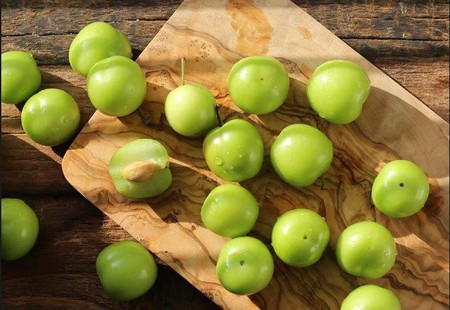 Sours green plums are used in Georgian cooking, an increasingly popular cuisine in Israel, as they are stewed down with a little sugar to make a sauce that is served with meat, poultry or fried potatoes. They can be added to beef stews or lamb tagines, as with apricots or tomatoes, and they are wonderful preserved too. Whether eaten raw or cooked, sour green plums are a real delicacy in the short few months of spring when they are in season.

Freekeh or farik is green wheat that is grown in the agricultural plains and hills of the Galilee. It is picked in spring when it is still young and unripe and then roasted over open fires in the fields, to burn off the husks, giving freekeh its distinctive, smoky and nutty flavor. 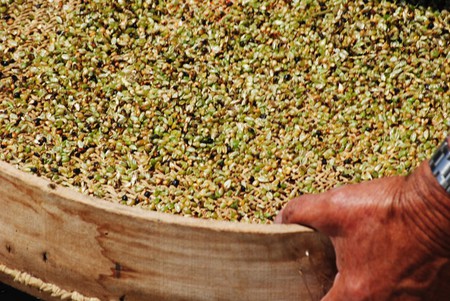 Freekeh, the green wheat of the Middle East | Courtesy of greenprohet.com

Freekeh has become the new super grain by the innovative young chefs all over Israel, despite is biblical origins and having been a staple in the diets throughout the Middle East for many centuries. There is a story that dates back to 2300 BC of how freekeh came not only to be made but also named, due to the miracle that saved their precious wheat crops. It is said that the inhabitants of an Eastern Mediterranean city were expecting an assault on their city and agricultural land, so not wishing to lose their harvest and go hungry, they picked the green, unripe wheat heads before the imminent attack. In order to salvage something from the burnt wheat, they rubbed the heads vigorously to remove the embers and found that not only were the remaining grains edible, but tasty too, and so the grain was named freekeh, which means ‘rubbed’ in Arabic.

Highly nutritious, rich in protein, iron and fiber and low in fat, freekeh is cooked with chopped onions, stock and spices and used as the base for delicious salads, soups or as the mixture to stuff vegetables, such as peppers or aubergines. 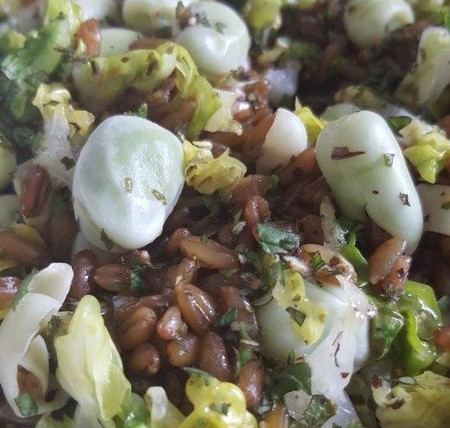 Akkub is an edible wild plant from the thistle family grown in the plains of the Galilee. A spring delicacy, akkub has a distinct taste that is a somewhere between the asparagus and the artichoke. From the Gundelia tournefortii plant, more commonly known as Tumbleweed, akkub is considered to be a rolling plant, which spreads its seeds through wind dispersal. At the end of the season, the roots and stem of the plant separate, allowing for them both to be carried by the wind to self-seed in another part of the Galilee. In Hebrew, Akkub means wheel, which was given its name from the rolling of this round plant across the fields, scattering its seeds across the land. 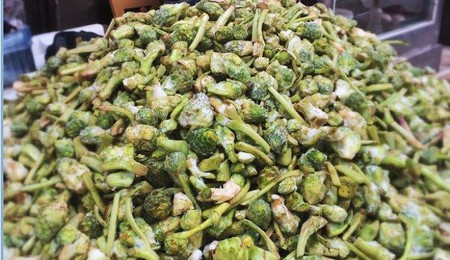 Akkub is a nutritious plant, said to be high in protein, iron and vitamins. It is believed to have anti-oxidant properties and stimulate the appetite.

Although difficult and time-consuming to prepare, extracting the stem from the thorns of the thistle, this wild vegetable can be cooked lightly in oil and butter or softened gently in stock with onions and light spices and eaten as a delicious accompaniment to meat or fish.

Strolling through the gardens on Kibbutz Amiad amongst the wild edible nasturtiums and the citrus trees, there proudly stands a wild mulberry tree laden with fruit, green and under ripe but bathing in the spring sunshine, trying to turn the deep red of soft, ripe mulberries.

Wild mulberries have been growing in Israel since the 15th century and the Ottoman Empire when Jewish diplomats tried to find towns for refugees from Europe to inhabit, with the hope of creating a new industry for them in silk, through feeding the silkworms on the mulberry leaf. Although trade ceased, the mulberry trees took root, spreading their ancestry over the Galilee and resting in the town of Zefat, leaving the ancient trees to produce these spring berries year after year. 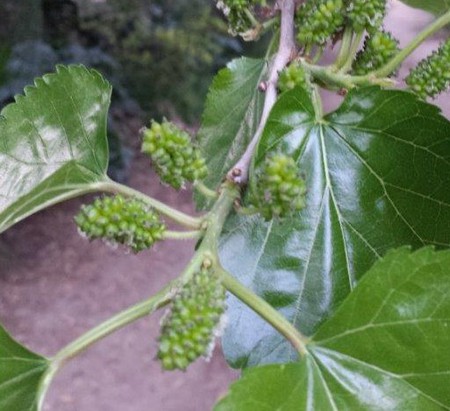 For a few brief weeks in May, their shiny leaves hide the ripe harvest which is picked from the trees and turned into jam or chutney for the rest of the year. There is often such volume in the amount of berries that laden the trees that they’re not only picked straight from the trees by passersby but also can be dried in the warm sunshine and then crushed so that the juice can be fermented and turned into mulberry wine or vinegar.

The large, beautiful green leaves of the mulberry tree, too, are edible and can be stuffed with rice or couscous, minced lamb or beef, chopped onion and spices.

Tootei–etz or tree berries as they are known in Hebrew, are a nutritious, low-calorie fruit, rich in vitamin C and essential minerals that are simply delicious, plucked from the tree or turned into muffins, cakes or sauces to accompany sweet or savory dishes. 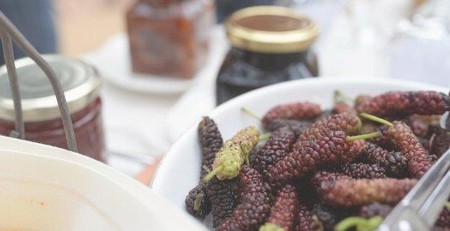 There is a growing culture throughout the Galilee for the foraging of wild foods that are picked by the locals for freshness, taste and nutritional value and used in kitchens to create delicious plates of food that have come from the land.