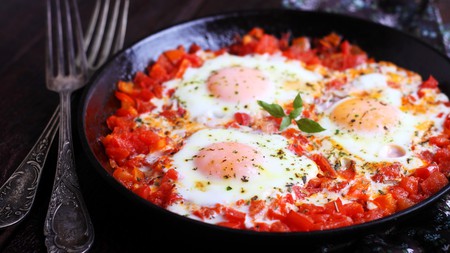 Shakshuka can be found throughout the Middle East, but its exact origin is unknown | © alely / Shutterstock

Shakshuka is a must-try dish on any visit to Israel. This Middle Eastern delicacy is a staple every Israeli has learned to master, with at least a dozen creative variations found across the country. 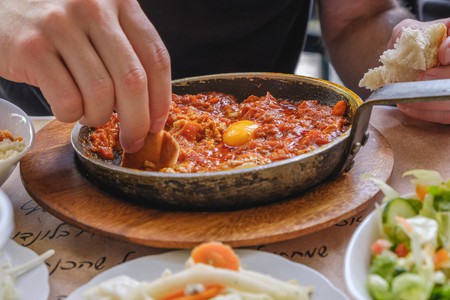 One of the most popular dishes in Israel, shakshuka comes in a number of versions, from spicy to sweet, with vegetables or minced meat, served on a platter or in pitta bread. Simple and easy to prepare, it is the perfect Saturday morning dish. It is so popular that many of Israel’s diverse communities – Moroccan, Yemeni, Libyan and Tunisian, for example – have their own versions. Delve into the history of this sumptuous dish and make room on your itinerary for sampling some of the best shakshuka in Israel.

Bubbling in a hot iron pan, a stew of tomatoes simmers under two soft eggs generously seasoned with hot pepper, crushed garlic, strips of red and yellow peppers and aromatic spices. The origin of the dish is highly contested: Neapolitans claim a very similar dish known as ‘Eggs in Purgatory’ (or ova m’priatorio in the local dialect), and Moroccans raise the flag of ownership over this dish, which is after all similar to a tagine.

Famous for his high-end hip eateries, chef Eyal Shani is also renowned for his profound love of tomatoes. His Instagram account is a striking visual and culinary ode to the red fruit. In a recent television interview with an Israeli station, Shani said that shakshuka was all about placing tomatoes over a fire in order to “create a sauce with no regret”. He continued, “It was about cracking the eggs on top, with no option of going back.” During the interview, he summed up the whole process as the action of placing a pan over a wood fire and watching how the red sauce simmered down to perfection until it was ready. “It is like going on a journey,” he said. 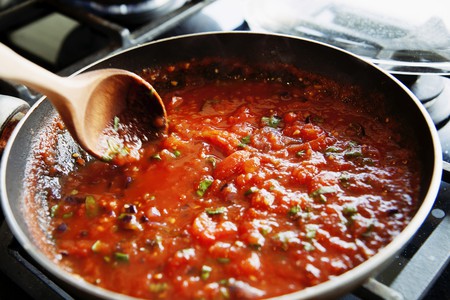 Though we know that the dish is common throughout the Middle East, the combination of ingredients raises many questions about its exact origin. For one, the word ‘shakshuka’ comes from the Arabic ‘to mix up’, which certainly explains the way the dish is cooked, and might also offer a clue to its birthplace. Some sources claim that the dish is Tunisian and Libyan in origin, and that it was probably brought over to Israel by Tunisian Jewish immigrants during the 1950s. When these groups settled in Israel, they brought with them a recipe that combined relatively cheap ingredients, like garlic, tomatoes and peppers, which were cooked in a sizzling hot skillet and served with a loaf of bread. Some food historians, on the other hand, link shakshuka to Yemeni cuisine, where it is prepared with a hot pepper sauce known as zhug, or sahawick in Yemeni Arabic. However, Moroccan, Iraqi and Turkish Jewish immigrants prepare a similar dish, which makes its exact origins quite difficult to determine. Adding to the confusion, a number of other cuisines boast similar dishes, such as menemen in Turkey and huevos rancheros in Mexico.

The popularity of the dish in Israel is linked to the early years (from 1949 to 1959) of the newly formed state, when food rationing was part of a series of austerity measures put in place to cope with the sudden increase in population. The ingredients to make this dish are relatively simple and cheap to source, and many families relied on shakshuka as a main nutritious dish that was healthy, well balanced and filling, especially when eaten with bread. 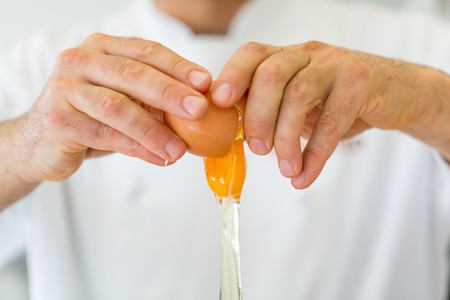 Traditionally eaten with fresh pitta or challah on the Sabbath, shakshuka has its own eating ritual, as diners scoop up the mix of spicy and sweet tomato sauce and aromatic herbs with bread directly from the pan. Side dishes include tahini, olives and an Israeli salad of freshly chopped cucumbers, tomatoes and mint leaves.

Today, shakshuka appears on the menus of the best cafés, restaurants and hotels across Israel and has become popular brunch fare across the world. Inspired by his roots in Jerusalem, chef Yotam Ottolenghi upgraded the dish by adding harissa and labneh yoghurt for his bestselling cookbook Jerusalem, and now serves it to millions of food enthusiasts at his London bistros.

The main ingredients of shakshuka are tomatoes (fresh tomatoes, tomato paste and tomato sauce), garlic and eggs. The key is to use the highest-quality tomatoes to ensure the texture has the consistency of a pasta sauce and the flavour does not overwhelm the spices. Optional ingredients include onions, diced aubergine, spicy sausage or feta cheese. Once combined, the ingredients are left to simmer down to a thick sauce. Eggs are then cracked on top of the sauce and left to cook until they reach the right consistency, then fresh parsley is sprinkled on top. Modern interpretations can also include minced meat, spinach and mangold leaves (chard), and tofu or cheese in the place of eggs for vegetarian and vegan-friendly options. 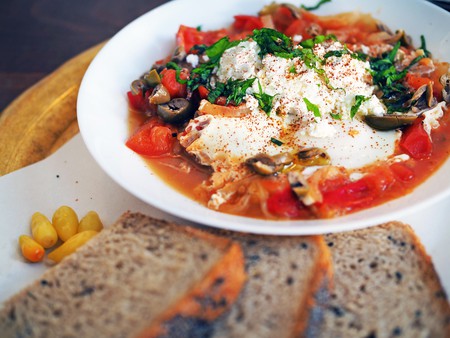 The main ingredients of shakshuka are tomatoes, garlic and eggs, but there are many variations | © RBS / Alamy Stock Photo

In Israel, shakshuka is served all day long in many cafés, but is a particular favourite on weekend brunch menus. Highly recommended shakshuka spots include Tel Aviv’s Café Zorik, Babi Local Food Bar and Shakshukia, and Dwiny Pita Bar in Jerusalem.