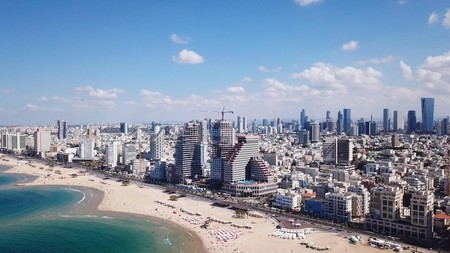 Three generations of an Israeli family of architects have designed – individually or collectively – some of Tel Aviv’s most iconic buildings.

The Tel-Aviv-based architecture firm, Rechter Architects, is more than just a practice that has been fundamental in shaping Israel’s physical image, it’s a dynastic powerhouse headed by three generations of one family: award-winning celebrities in their field and Israeli legends.

The three founding fathers of modern Israeli architecture are widely considered to be Ze’ev Rechter, Arieh Sharon and Dov Karmi. Within Israel’s architecture community, there’s a joke that they are at the top of the animal kingdom of architecture, because all three first names are Hebrew words for animals, Ze’ev meaning ‘wolf’, Arieh meaning ‘lion’, and Dov meaning ‘bear’. Of these three, Ze’ev Rechter became the head of a family of architectural royalty in Israel.

His son Yacov, who would join his father in the firm in 1952, was one of the most prominent modernist architects of mid-20th century Israel. Today, Rechter Architects is managed by Yacov’s son, Amnon, who joined the firm in the 1980s and took it over from his father in 2001.

Israel’s architecture is defined by its mishmash of cultural styles and influences: Arab, Byzantine, Crusader, Islamic, Bauhaus and Brutalist buildings converge across the region, from tightly packed city boulevards to small, rural municipalities. The Rechter style mirrors this convergence, with each Rechter incorporating the soul of their generation, ensuring that their portfolio is reflective of the times in which they live: modernist, brutalist, contemporary.

The value of one Rechter’s contribution over another cannot be quantified. Their designs have always attempted to incorporate environmentally friendly materials to create a sustainable Israel, and they consider themselves to be “experts in energy saving design and building techniques.”

There are Rechter designs all over Israel – from courthouses to kibbutzim, from the Jerusalem International Convention Center (Binyanei Ha’uma) to the 1968 accordion-shaped masterpiece that is now the Elma Arts Complex Luxury Hotel, which won Yacov Rechter the prestigious Israel Prize for Architecture in 1973. 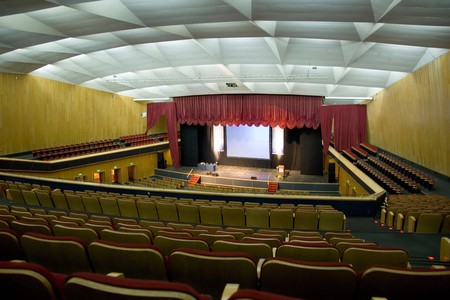 There are Rechter-designed buildings across the country, and one notable example is the Jerusalem International Convention Center (Binyanei Ha’uma) | © Gabriel Rif / Alamy Stock Photo

Yet, individually and collectively the Rechters are often associated with Tel Aviv, where their firm is based. Like all good architecture, their designs enrich the city and feed off its culture. 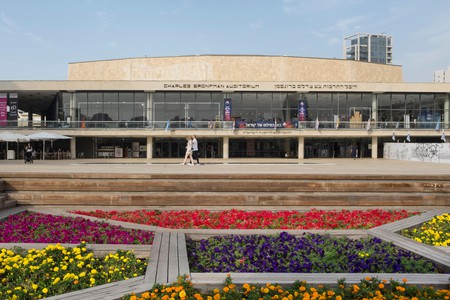 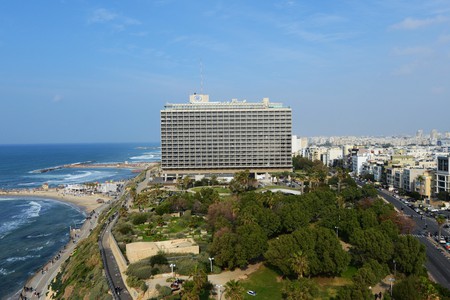 The first Rechter of the dynasty was born in Ukraine and emigrated to Mandate-era Palestine in 1919. He left briefly to study architecture in Italy and France where he became a pupil of pioneering modernist Le Corbusier. From Europe, he brought back a canon of idealist architecture as inspiration, much of which echoed the socialist and humanist ideas of the early Zionists, and included the replacement of craftwork with mass production.

Ze’ev returned to Tel Aviv, as immigrants were pouring in, many fleeing Nazi Germany. Buildings needed to come up fast to house the newcomers. In those early idealistic days, housing would be low cost, each building would have a garden, and a private balcony would be everyone’s right.

When he started designing in Tel Aviv, Rechter adhered to key principles of the International School, but learned to modify them to suit Tel Aviv’s Mediterranean climate. Some of his most renowned designs of this time were private residences, such as Engel House (1933), the first in Tel Aviv to feature the stilt-type columns (pilotis) that were part of the Le Corbusier canon, and Avraham Soskin House (1933), the private residence of the eponymous photographer and artist, and the first building to feature ribbon windows and wraparound balconies. 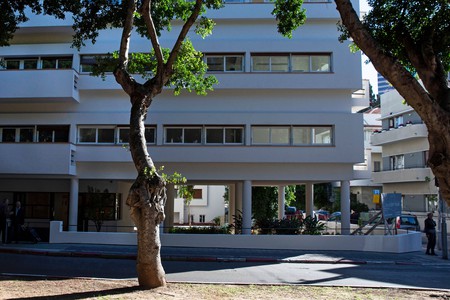 Ze’ev Rechter designed many private residences in the 1930s, such as Engel House (1933), the first in Tel Aviv to feature the stilt-type columns | © ABIR SULTAN/EPA-EFE/Shutterstock

His son and successor, Yacov, born in Tel Aviv in 1924, was among the most prominent modernist architects of mid-20th century Israel. In collaboration with his father, he created important cultural edifices as Tel Aviv started expanding to become a centre of music, theatre and art. Examples of public buildings are the 1957 cultural hub, known as Heichal HaTarbut, which includes the Helena Rubinstein Pavilion and the Charles Bronfman (formerly Mann) Auditorium (home to the Israel Philharmonic Orchestra). Designed also with Dov Kami, the hub is a clever assemblage of buildings in the Brutalist style, which marks the start of the second generation of Tel Aviv architecture and which would become Yacov’s signature style. 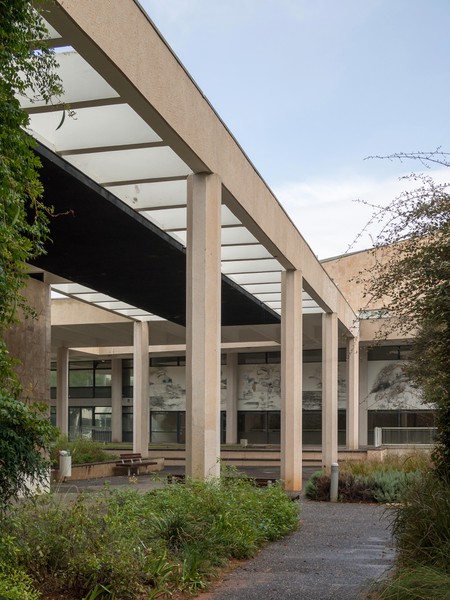 In 1972, Yacov received the Israel Prize of Architecture for his design of the Mivtachim Sanitarium. The concrete masterpiece overlooks the Mediterranean Sea in Zichron Ya’acov, north of Tel Aviv, and fans out like an accordion as it follows the curve of the hill it sits upon. It was designed as a vacation sanatorium, but in 2015 was restored under the supervision of his son Amnon and converted into the extraordinary Elma Luxury Hotel and Arts complex.

Amnon, talking to Culture Trip, said, “Tel Aviv is known for its Bauhaus, but it’s also very much a Brutalist city”.

In his opinion, the influence of Le Corbusier is stronger than the influence of the Bauhaus, believing that “it’s much more of an international style than Bauhaus”. This despite the fact that the city’s 4,000 plus Bauhaus buildings have been declared a UNESCO Heritage Site.

Amnon, who now heads the firm, represents the third generation of Rechter architects. His work, which won him the award for Israel’s Most Influential Architect in 2009, explores architecture with an eco-minded and socially responsible outlook.

One of his designs, the new Law Tower, was built as an extension to his father’s Brutalist law court and incorporates interior light wells and open public spaces like those in the original building.

The third-generation Rechter is also something of a fan of Tel Aviv’s urban planning, or lack thereof. Its decidedly non-grid-like state is a large part of the city’s appeal. “It’s really a city built for roaming around and unexpected discoveries,” Amnon said.

An example of this is one of Tel Aviv’s most delightful spaces: the Ya’akov Gardens – a multitiered garden of ancient sycamore trees, and charming pathway and bridges, designed by Yacov Rechter – that links the Bronfman Auditorium to the Rubinstein Pavilion and Habima Theatre.

It’s so hidden from view that most visitors only discover this graceful, quiet green space in the middle of the city by accident. It’s an unexpected Rechter discovery in a city where the name otherwise dominates the skyline. 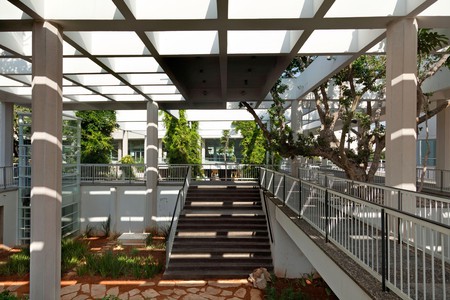 The Habima theatre is connected to the Mann Auditorium via charming pathways and bridges that are part of the Ya’akov Gardens, a multitiered green space designed by Yacov Rechter | © Eldad Carin / Alamy Stock Photo

The future of the Rechter name

The year 2019 marks the year Rechter Architects celebrates its centennial anniversary. In celebration, Amnon explains that the Rechter Architecture Foundation has opened the firm’s archives of drawings, models, plans and photographs to the public, so that “the discourse of architecture can be reopened”. As part of the celebration, the firm has also launched architectural walking tours of Rechter buildings.