Andreas Golder was born in 1979 in Yekaterinburg, Russia, and lives and works in Berlin, Germany. His works have been exhibited in galleries all around the world. In his work, Golder is concerned with the ‘eternal subjects of painting’ – love, suffering, decay, blood and painting itself. An objective painter in his essence, Golder’s object is the condition, the emotion, the stupid idea, bad jokes, therapy – anything. We find out more about this fascinating artist.

EM: In a recreational visit to Berlin this past April I visited Michael Fuchs Galerie on Auguststraße, the famous street that inhabits numerous art galleries in Mitte district. While I was visiting the show called “Salon” I encountered Andreas‘ works and felt an immediate connection to its florescent colors, handmade strokes and dynamic composition. This is a part of our chat and images I shot while I was there. 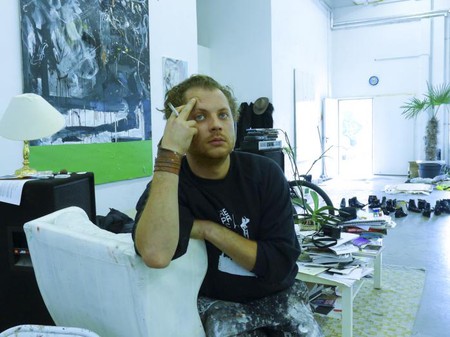 EM: Is it true that the main galleries you’re associated with are located in China and Switzerland? 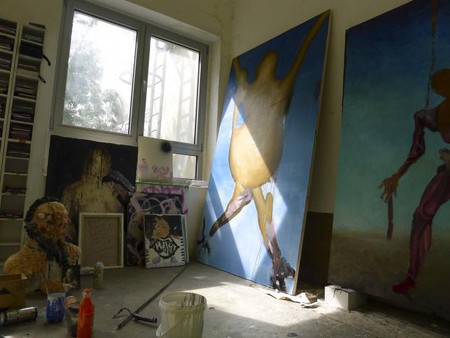 EM: When Did You Start Creating Art?

AG: Well I had a stepfather who is an artist and mom who was an art historian. So I grew up in art studios. Started when I was six years old. I got trained in Russia, where I was born. I was in a special school where in the morning you had normal school and in the afternoon you were in painting class until the evening. I got this academic training, so it started then. 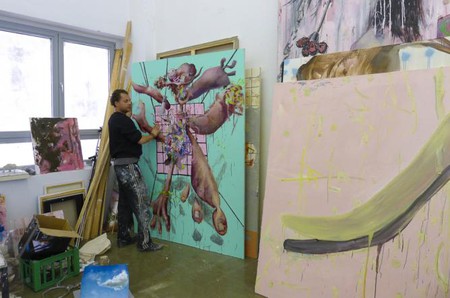 EM: They have a dedicated painting school for 6 year olds?

AG: Once you come to the school the first year you do everything, like ballet, and art history and painting. They kicked me [out] from ballet and art history because I was too rebellious or whatever and said: YOU’RE A PAINTER. At the age of seven… when I was a teenager, I wanted to become a car designer, and my parents were like… ‘mmm…sure try’, but then I ended up just making art, because I moved to Berlin when I was 18. 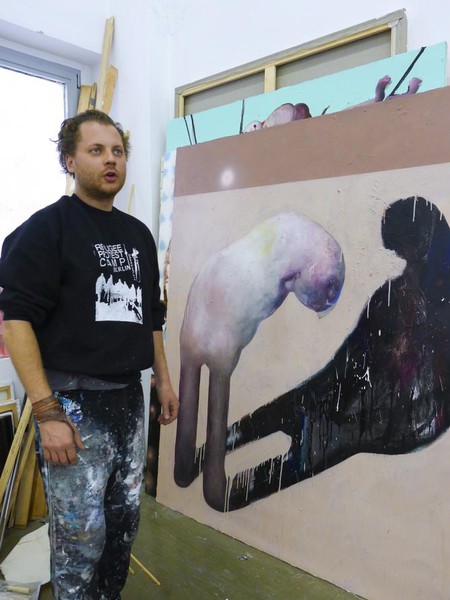 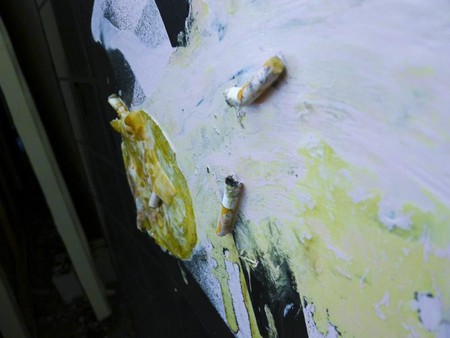 EM: You paint a lot with your hands?

AG: Yes. Like here – no brushes were harmed during the process of this painting.

Its sometimes quicker, you know. I use this gesture movement from abstract expressionists that has a lot of contrast. A lot of my work is about contrast and bringing things together that don’t really belong together… You have this gesture while painting, but it’s built up like in the medieval times, it’s in layers, so I use this old layers technique to give a kind of a space.

And this painting [‘24 Hours of Headache’] for example, people say and think it’s abstract but it’s a naturalistic painting, it’s of a wall in the studio after I did some paintings, I copied it actually. My painting wall looks exactly like this. So it’s like a still life, in a way. This is a detail of a sky, bathroom, the night at the club. Memories of Berghein. So this piece…it’s kind of a diary. 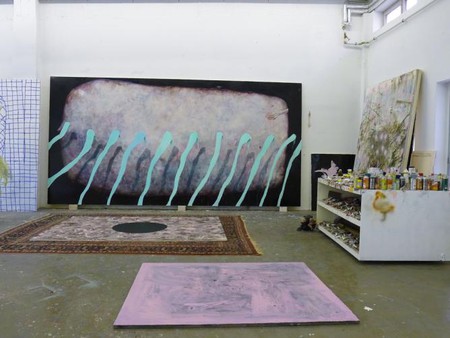 EM: That’s really awesome to have such a big studio that you can work in such large scale. Do you work with assistants?

AG: I used to work with an assistant but I don’t anymore because they’re too…annoying. 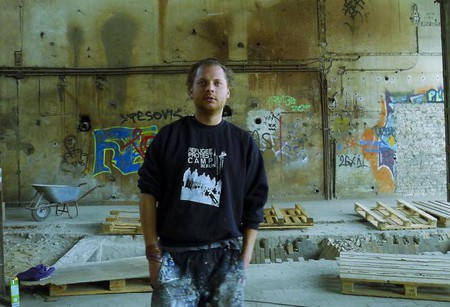 EM: You have to teach them and so on?

AG: Yeah once you finished explaining everything that you want from them you could have done it yourself already. I also need to be quiet here. 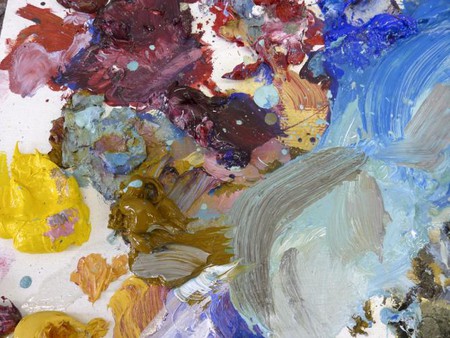 EM: Your works are reminiscent of Francis Bacon.

AG: Well… a lot of it. Because it’s all meaty, this [gestures to painting] is actually from this illustration from the 18th century, and I wanted to see it in color. So that’s why I do it. So… and I’m sure Francis Bacon was looking at those too. Showing me more works.

You know, if I go to the museum and I look at all those old masters, I found out I look at them completely differently from other people. Other people look for the story behind it and whatever; I never look at them this way. I love how they built it up, and the space and the colors and how they did it, you know? I was always trying to do something like this but without the messages. There’s a saying from Nietzsche – the longer you look out to the abyss, the abyss starts to look back at you, or in you.

Because there is not really something that I have to tell to the world, you know? Who am I to tell the world what’s going on. I just do my little paintings. 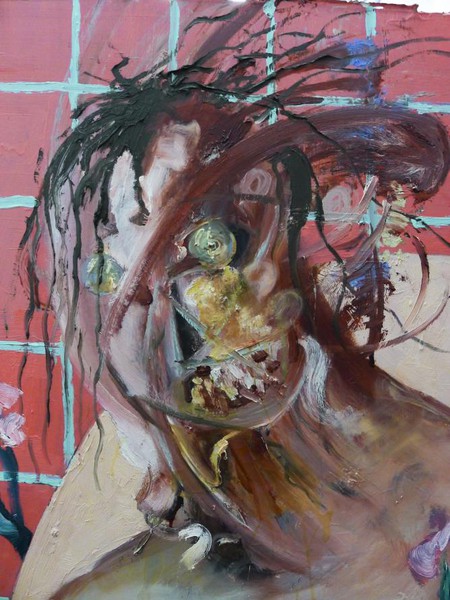 Andreas Golder organized and installed a huge multimedia show with 120 other artists. The show opened on April 30th in 34 Lehderstrasse, Berlin, Germany. Find more details on the website.

Multimedia artist and fashion photographer Ella Manor specializes in photography, video performance, and installation work. A graduate of the Fashion Institute of Technology and the International Center for photography in New York City , Manor returned to her native Israel after spending a decade In NYC. Featured and worked with art, photography and fashion publications around the world such as Harper’s Bazaar, Black and White magazine, Timeout, and Clam magazine to name a few, Manor also won numerous photography awards, and has exhibited her work in galleries and museums globally.