7 International Musicians Not For The Mainstream

For those who choose to stray from the mainstream, we’ve got a list of seven musical artists who refuse to conform and be pigeonholed into music manufactured for the masses. From Brisbane to Minnesota, these international artists will give your ears something they haven’t heard before and take you on everything from an emotional ride, to feeling like you could party for hours.

Born in Jerusalem to diplomat parents in 1980, it took a painful heartbreak for singer-songwriter Asaf Avidan to fully explore his musical talents. While working as an animator in Tel Aviv, Avidan saw the end of a long-term relationship with his then- girlfriend and decided to channel his emotional anguish into music, first forming the folk-rock group Asaf Avidan and the Mojos in 2006. The group released three albums, toured extensively in Israel and even got an international hit with the remixed version of their original track ‘The Reckoning Song,’ but eventually came to an indefinite end in 2011 with Avidan deciding to pursue a solo career instead. Since then, he has released two studio albums, in 2013 and more recently in 2015 with Gold Shadow, continuing to gain fans all over the world with his unmistakable tone and heartfelt lyrics. With his impressive musicality and stage presence, he has the ability to make even the largest of venues feel like intimate shows.

For Jean Philip Grobler AKA St. Lucia, exposure to music and performing from an early age has certainly paid off. Growing up in Johannesburg, Grobler was part of a boys’ choir that traveled internationally and began making music of his own at the age of 12. As a child of the 80s, musicians like Phil Collins, Lionel Richie as well as Paul Simon’s Graceland played a big role in the sound of St. Lucia today – a kind of new age pop backed by heavy synth and drum beats that make it hard to not want to break out in dance. Supported by four other musicians, St. Lucia released an EP in 2012 which quickly caught the attention of record labels and led to their signing in 2012 to Neon Gold Records. After a re-release of his previously independent EP, St. Lucia’s debut album When The Night followed in 2013. Having kept busy with remixing tracks for several acts such as Charlie XCX and Foster The People as well as producing the debut album for indie pop act HAERTS, St. Lucia is set to make waves with his next studio album which is currently being recorded.

This truly self-made duo found themselves on the world stage when their debut single ‘Stolen Dance’ went viral after its release on Youtube in the spring of 2013. After deciding to record a debut album on their own newly formed independent label Lichtdicht Records, school friends Clemens Rehbein and Philip Dausch found a sound of their own, mixing reggae, rock and folk with electronic elements in Milky Chance. The two recorded their debut album Sadnecessary from Rehbein’s living room in Kassel with only four pieces of equipment. Following the initial success of their debut single and the release of their debut album, this down-to-earth pair have toured internationally and have seen themselves nominated for a slew of awards. At times equipped for performances with nothing more than a wooden box, a guitar and their voices, Milky Chance has a simple, humble sound with mellow beats that sound like summer and are the definition of easy listening.

For such a small girl, Lykke Li makes a big sound. Debuting in 2008 with help from producer Bjorn Yttling of Peter Bjorn and John, this Swedish export is no stranger to critical acclaim with her latest album I Never Learn making it onto several 2014 Best Album charts such as Rolling Stone, Billboard and Pitchfork. As the daughter of a musician and photographer, Li spent her youth traveling with her parents, spending her winters in Nepal and India and even living atop a mountain in Portugal for some time. Perhaps it was this multi-national upbringing that helped develop her sound today, which can’t be easily categorized. Lykke Li’s melancholy lyrics paired with her crisp vocals will make you want to cry and dance at the same time. The singer-songwriter leaves her audiences captivated with a sound that is hard to pin down and simply just too huge for the stage.

Having been named ‘the best band I’ve ever heard’ by Bon Iver, Polica from Minneapolis will leave you in a trance, not quite sure of what you’re hearing but knowing you want more. Originally formed by producer Peter Olson of Gayngs and frontwoman Channy Leaneagh, Polica began as more of an experiment which led to the eventual release of a debut album Give You The Ghost in 2012 on a community-funded label and later a second album Shulamith in 2013. As a self-professed fan of autotune, Leaneagh manipulates her vocals creating a layered, almost indiscernible sound that weaves across the heavy electro instrumentals in a style that could only be described as space-age.

As the newest artist on the list, Jarryd James came out with his haunting debut single in January of 2015 Do You Remember, peaking at number two on Australian charts. With a soulful voice, the singer-songwriter from Brisbane formed a band with some of his best friends and hit the road, selling out venues in April of 2015 followed by a second tour in larger venues due to popular demand. Other than the more obvious influences of both R&B and jazz on his sound, James also cites artists such as Neil Young and The Eagles as having had a major impact on him. The emotionally charged lyrics laid down by James’ smooth voice make for a sound you’ll have a hard time getting out of your head.

A well-crafted mess of electro rave-pop rap, Die Antwoord is the musical equivalent of an acid trip. As the brainchild of underground rappers Ninja and Yolandi Visser of Cape Town, Die Antwoord has gained a cult following with their party-hard sound and ZEF style – a counterculture movement started in South Africa which the group themselves defines as modern yet trashy. With an in-your-face sound and unapologetic lyrics sung in a mix of English, Afrikaans and Xhosa, the duo released their debut album online for free in 2009 off of their own independent label and started gaining international recognition with their first video for Enter the Ninja. The video gave the group the momentum they needed and following their initial success, Die Antwoord had a brief stint of being signed to a major record label until they eventually parted ways due to feeling suffocated by the pressure of the music industry trying to tell them how to sound. They have since then gone back to releasing their music independently, with their last album in 2013 marking a return to their unpredictable style which their fans have grown to love. 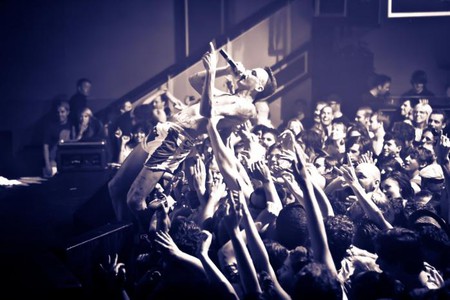