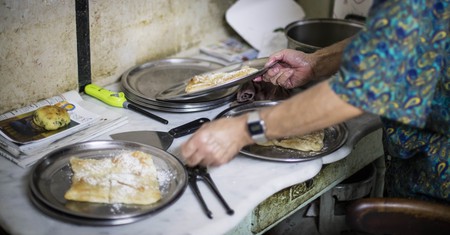 Operating in the heart of the Old City’s Arab souk since 1860, Zalatimo Sweets is a hidden treasure in the holy city. The head baker, Abu Samir Zalatimo, relies on a secret family recipe to prepare the dish for which his place is famous, a deliciously sweet Palestinian filo pastry known as mutabak. 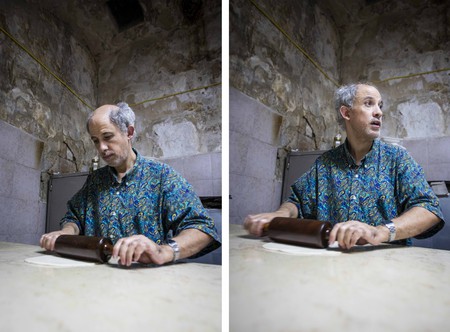 Strolling through Jerusalem’s Old City is like taking a journey through time, where cultures and religions have left their marks in the very stones of its ancient buildings and walls. Containing sites important to Jews, Muslims and Christians, the Old City also features local attractions that are living testaments to the complex (and often conflicted) past of a holy city.

The ancient and modern worlds come together in a fascinating way at a perhaps lesser-known Old City establishment: Zalatimo Sweets. 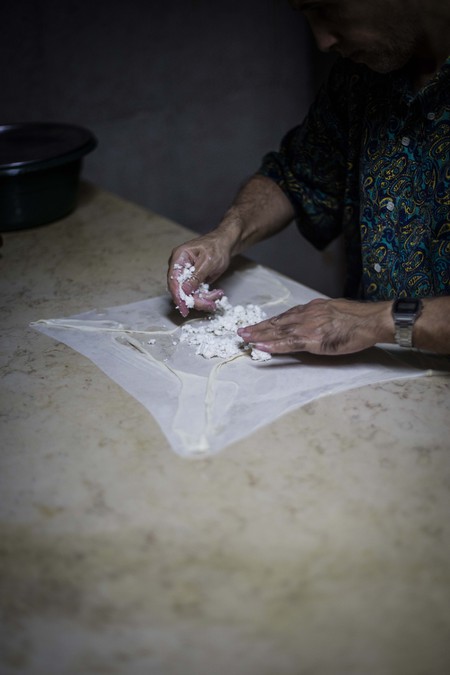 Zalatimo Sweets is known for its mutabak, a Palestinian filo pastry | © Christopher Beauchamp

Founded in 1860, this tiny hole in the wall is nestled in an alleyway along the Arab souk, behind the Church of the Holy Sepulchre. Amid the countless stalls manned by lively merchants attempting to sell tourists and local people everything from juices and spices to souvenirs and clothes, it’s easy to miss this comparatively more subdued bakery. Escape the overwhelming sights, sounds and smells of the nearby crowded marketplace and discover one of Jerusalem’s best-kept secrets.

Abu Samir Zalatimo stands behind the marble countertop, his hands deftly working a ball of dough and rolling it out into paper-thin layers. Descended from a dynasty of Palestinian bakers, Zalatimo’s great-grandfather, Mohammed Zalatimo, opened Zalatimo Sweets more than 150 years ago. Inside, the semi-subterranean shop’s decor can be described as sparse at best, with ancient vaulted ceilings, a gas oven and paint-chipped stone walls. However, the tourists and local people who rush to get a seat at one of its four tables are not here for its ambience; instead, they’ve come from far and wide to get a taste of the only item on Zalatimo Sweets’ menu – the famed mutabak pastry. 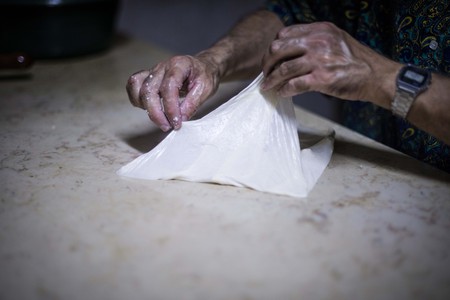 Crunchy, warm, sweet and ever so satisfying, mutabak is common throughout the Levant and the Arabian Peninsula. At Zalatimo Sweets, visitors can choose from two options – a powdered-sugar-topped pastry filled with either nuts or cheese. The ingredients are simple: filo dough, sheep’s cheese or toasted walnuts and pistachios, clarified butter and sugar syrup. Each mutabak is made fresh to order.

“My great-grandfather Mohammad started this bakery,” says Zalatimo. “Initially we prepared baklava,” he adds, referring to the sweet dessert made with layers of filo pastry, honey and nuts that is popular throughout the Middle East.

He points to a nearby pastry display case and says that it used to hold baklava more than a century ago. 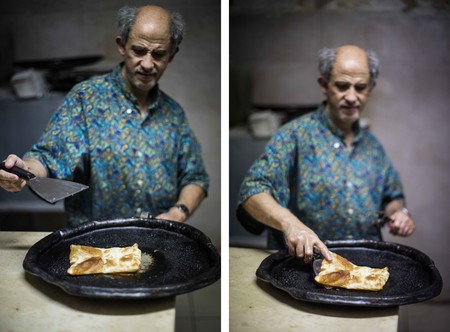 Only once a year, during the Muslim holy month of Ramadan, Zalatimo closes the shop in the Old City and produces another popular Palestinian dessert known as kataif (a stuffed fried pancake filled with nuts or others sweets) solely for his neighbours in Wadi Joz, a suburb of East Jerusalem where he lives. But, he adds, making mutabak is his long-held passion.

As those seated begin to dig into the freshly baked dessert, 73-year-old volunteer waiter Tutu arrives with a serving tray carrying tiny cups of Arabic coffee and black tea from a nearby stall.

Tutu is a Jerusalemite, who was born in the Old City and still lives there, and who has been volunteering at Zalatimo Sweets for several years. “Arabs come here a lot because this is considered a kind of breakfast food for them,” he says as he serves drinks to the never-ending stream of customers who enter the shop. 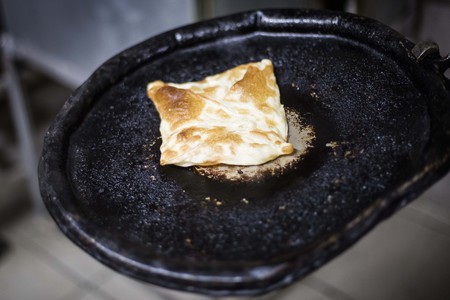 Inside, along one of the shop’s walls, lies a conspicuous doorway that, although sealed shut, was reportedly one of the original main entrances to the Church of the Holy Sepulchre centuries ago. According to Zalatimo and Tutu, archaeologists closed the gateway to the public in order to conduct extensive excavations in the area. In his bestselling book of 2011, Jerusalem: A Biography, British historian Simon Sebag Montefiore notes that Zalatimo’s Sweet Shop “incorporates the [second-century] remains of the gate of Hadrian’s Temple of Jupiter and the entrance to the main forum”. At the time, the Roman emperor Hadrian had ordered the construction of the temple to Jupiter on the very site of what would later become one of the holiest sites in Christianity.

Much of the shop has remained untouched since it opened in the 19th century, and Zalatimo has no plans to renovate or modernise the space.

“This city is my family’s place; we’ve been here for generations.” Zalatimo, who is now 42 years old, explains that his brother Yousef’s son is expected to carry the torch once he retires since he has no children of his own. “Ultimately, I want this place to continue the same way in the future – not for it to grow or modernise but to stay exactly the same.” 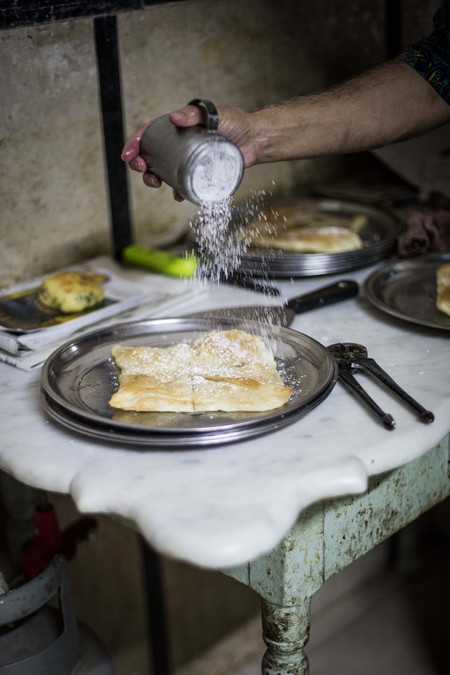 Cafe, Israeli
Facebook
Email
Twitter
Pinterest
Copy link
Share
Zalatimo Sweets is located at 40 Souk Khan el-Zeit Street (also known as Beit Habad Street) in Jerusalem’s Old City, just behind the Church of the Holy Sepulchre. It has no official opening hours, but it is usually open every day from 9am to 1.30pm. Before ordering, always ask for the price of each item as it can change. However, because of the unique history of the café and how difficult it is to find fresh mutabak, many would say that it’s worth every penny.
Give us feedback