Jerusalem’s Church of the Holy Sepulchre Closes Due to Coronavirus 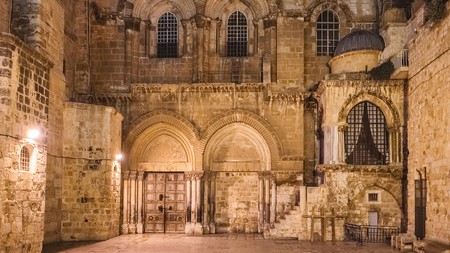 One of the holiest sites in the Christian faith has closed its doors to the public as a precaution, to help halt the spread of Covid-19.

Worshippers were locked out of the Church of the Holy Sepulchre, revered in Christian tradition as the site of Jesus’ crucifixion and burial, after the Israeli government announced tighter restrictions to curb the spread of the virus as the global death toll reaches 75,000.

The church doors closed at 5pm on 18 March with no guarantee of when they will reopen, just as Easter, one of the most important events in the Christian calendar, is fast approaching. 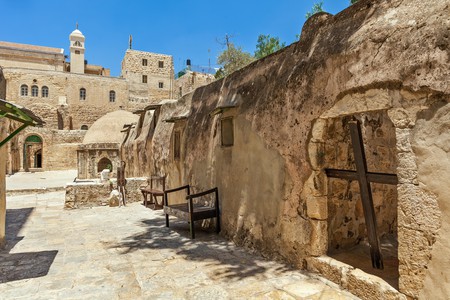 Roman Catholics will celebrate Easter on 12 April this year, and Church leaders hope to find ways to celebrate within the Israeli government’s new restrictions, which include limitations on gatherings of 10 or more people. This Christian celebration would normally attract thousands of pilgrims and tourists to the city, but streets and alleyways are deserted.

Wadie Abu Nassar, spokesperson of the Assembly of Catholic Ordinaries of the Holy Land, said at the time of the closure: “The initial understanding is that this order is valid for one week, although nobody knows how long this crisis will take.” 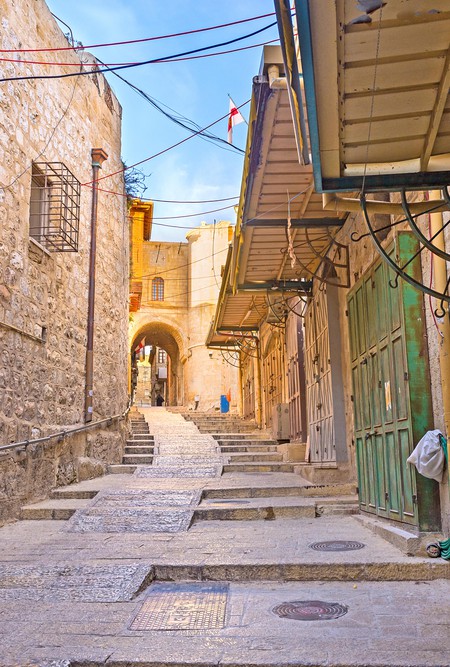 The closure comes just before Easter, one of the most important events in the Christian calendar | | © eFesenko / Alamy Stock Photo

The closure comes after public worship has been suspended across the world and replaced with online services. More than 11 million people tuned in to watch Pope Francis deliver an hour-long blessing to an empty Saint Peter’s Square in Rome last month.

The Holy Sepulchre sits within a courtyard at the edge of the Christian and Muslim Quarters in Jerusalem’s Old City. Four arches lavishly decorated with Crusader crosses herald the entrance of the church. 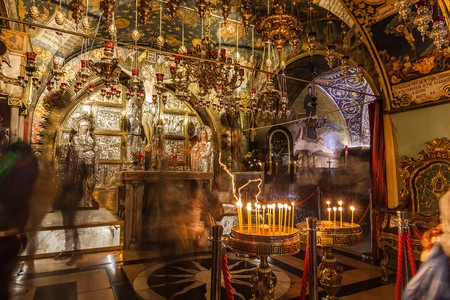 The church was first built in the 4th century – 300 years after Jesus’ crucifixion – under the rule of Constantine the Great, the first Roman emperor to convert to Christianity. It is believed to sit over Golgotha, or Calvary, where Jesus was nailed to the cross, died and rose from the dead, in the stories of the Bible. The decision to erect a church in this spot was the result of lobbying by Helena, the Emperor’s mother who, after going on pilgrimage in the Holy City, believed the tomb of Christ should be excavated and housed inside a church. 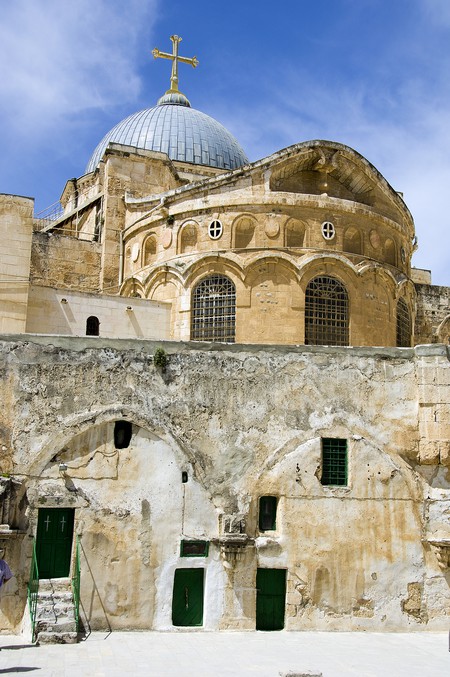 For the past 16 centuries, people have travelled to visit the site | | © BWBImages / Getty Images

Work commenced in 326 CE on the site, which at the time was an empty plot of land outside the city walls. It took nine years to complete. For the past 16 centuries, tourists and pilgrims have travelled from far and wide to worship here and see the final five Stations of the Cross with their own eyes. Inside a small chapel reached by stairs to the right of the church entrance, it is believed Jesus was stripped of his garments: the 10th Station of the Cross. Behind the wall of the 10th Station is the 11th, where Jesus is believed to have been nailed to the cross. The site of his death, the Rock of Calvary, is the 12th Station; an altar has been built with a hole allowing pilgrims to reach in and touch the rock. 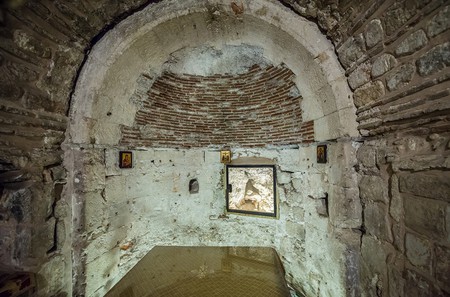 The 13th Station is where Jesus’ body is said to have been taken down. Back down the stairs, it’s impossible to miss the 14th Station, the Tomb of the Holy Sepulchre.

The church has been burned, destroyed by passing armies and weathered an earthquake. Ongoing disagreements between the Christian factions who share ownership (Catholic, Greek Orthodox, Armenian Orthodox, Syrian, Coptic and Ethiopian) meant it took until 1959 for a major repair program to be agreed upon. The most recent renovations took place in 2016. The church was locked up in 2018 amid political protests. 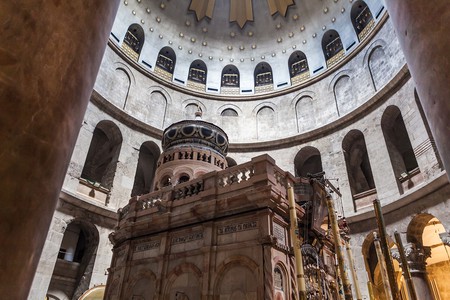 Keys for the church are held by two Muslim families, who take their role as guardians incredibly seriously | | © LUKASZ-NOWAK1 / Getty Images

To avoid clashes over control of the church, the key to it has been held by the same two Muslim families for centuries. The Joudeh and Nuseibeh families act as neutral guardians for the ancient cast-iron key, some 500 years old. When the church is open, it is their job to unlock the doors each morning and secure them again at night. It’s a model of coexistence dating back hundreds of years. The families believe they not only pass the key down through generations, but with it a symbol of interfaith harmony.

Elsewhere, Bethlehem’s Church of the Nativity was closed as well after the discovery of seven cases of coronavirus in the traditional birthplace of Jesus.