The Best Street Food in Jerusalem 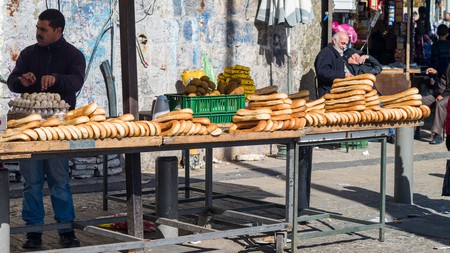 From falafel and shawarma to hummus and sabich, the Holy City offers a wide variety of Israel’s most mouthwatering street foods.

A city rich in history and home to a medley of culinary traditions, Jerusalem is second to none when it comes to delicious street food. A unique balance between Eastern and Western influences, these dishes have become synonymous with the city and with Israeli culture. Be it hummus, falafel, bourekas or knafeh, get to know the popular street fare that gives Jerusalem its unique flavour, and discover the best places to find it. 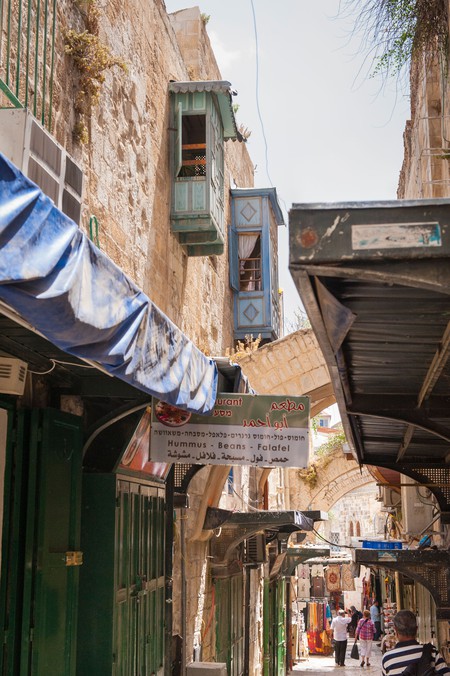 Crispy, fried and deliciously simple, falafel are traditionally made of ground chickpeas combined with a blend of herbs and spices. Commonly paired with a plate of hummus or stuffed into a pitta with salad and a side of chips, falafel are a versatile food that can be eaten as a snack or an inexpensive meal. Originating in Egypt, falafel quickly became an Israeli go-to, thanks in part to Yemenite Jews who began serving them in a pitta sandwich when they arrived at the country in the 1950s. Countless stalls, kiosks and family-run establishments serve falafel in the Holy City, but it’s Shalom Falafel, Falafel Brothers Levy and Mercaz Hafalafel Hatemani that are the local favourites. 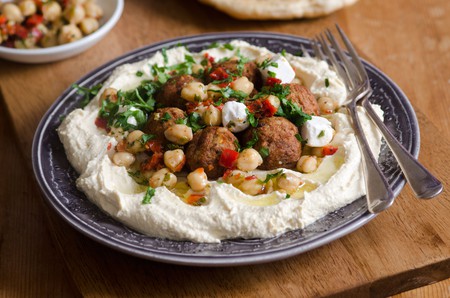 Made from cooked, mashed chickpeas and blended with tahini, olive oil and spices, hummus is an intrinsic part of Middle Eastern culture. While many tend to think of it as a side dish, hummus in Israel is typically served as a meal in its own right. Served in a big bowl alongside traditional accoutrements, including onions, pickles, hot sauce and fresh pitta bread, hummus is an affordable and nutritious staple food. The question of which place serves the best hummus in Jerusalem is hotly contested, with numerous stalls and small restaurants vying for the title. 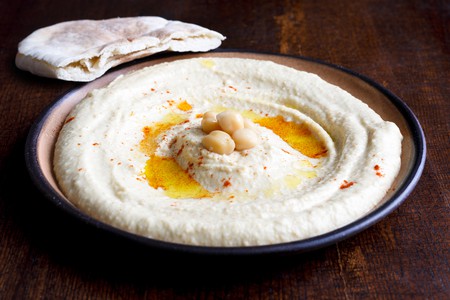 Hummus is considered a meal in its own right in Israel, and is usually served with warm pitta bread | © Etienne Voss / Alamy Stock Photo

If you love grilled or fried meat, seek out the shawarma and schnitzel that are often served side by side in Jerusalem eateries. Israeli street food par excellence, shawarma is a Middle Eastern dish commonly made from chicken, lamb or turkey grilled on a spit that is then stuffed into a pitta with salads and sauces such as tahini or hummus. Served in a similar way to shawarma, Israeli schnitzel is a dish of European heritage that is typically a fried and breaded chicken breast or veal cutlet. Wherever you walk in the city, you’re never far away from a good shawarma or schnitzel. 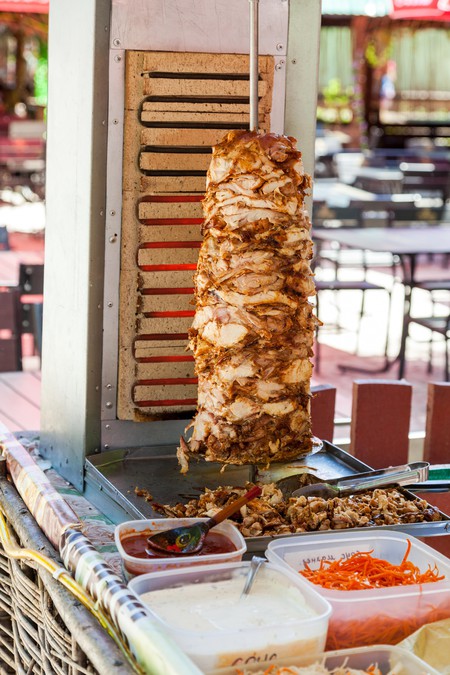 Shawarma, a meat grilled on the spit, being served at a street stall | © Alexander Blinov / Alamy Stock Photo

Eating a boureka is like indulging in a little taste of heaven. These baked pastries come with a variety of savoury fillings – most commonly cheese, spinach or potatoes. Brought to Israel in the 19th century by Jewish immigrants from Turkey and Balkan countries such as Bulgaria and Slovenia, they are available at most bakeries and supermarkets across Jerusalem and are one of the most common snack foods in Israel. Eaten alone or together with a hard-boiled egg and pickles, these pastries are best eaten hot and fresh out of the oven. 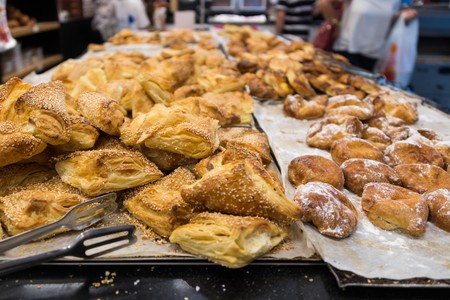 For a classic, vegetarian-friendly and authentically Israeli sandwich inspired by Iraqi–Jewish cuisine, look no further than sabich. Originally a breakfast food, this dish consists of fried aubergines and hard-boiled eggs stuffed into a pitta, overflowing with crunchy vegetables and tahini, and topped with chopped parsley. Whether served as a sandwich or deconstructed in what is known as a sabich bowl, sabich is greater than the sum of its parts. Among the best places in Jerusalem to taste it are the Arikha Sabich stall in the Mahane Yehuda Market and Hasabichiya in the Downtown Triangle. 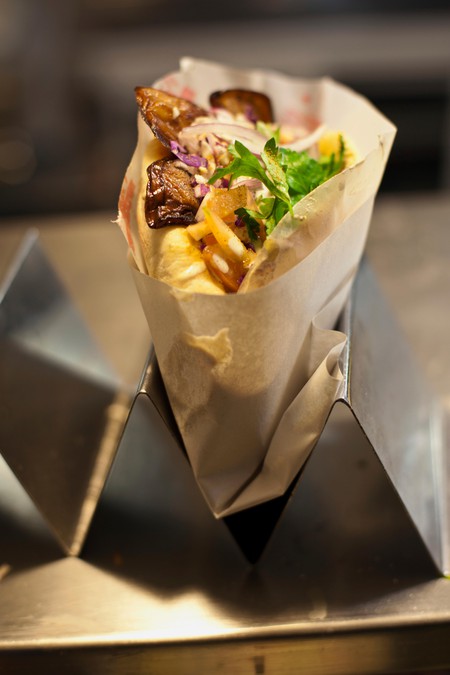 The me’orav Yerushalmi (known as ‘the Jerusalem mixed grill’ in English) is a Jerusalem speciality and a feast of the senses. A meat lover’s dream, this dish features chicken hearts, spleens and liver combined with lamb, all mixed together on a grill, seasoned with traditional Middle Eastern spices like cumin and coriander and served in a pitta or on a plate. Legend has it that the Jerusalem mixed grill was invented at the Mahane Yehuda Market, with many vendors claiming to be the original creator. 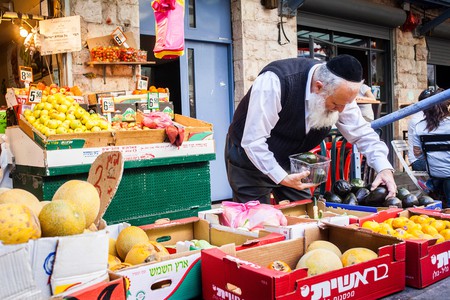 The busy Mahane Yehuda Market is said to be the birthplace of the mixed grill, me’orav Yerushalmi | © Lucas Vallecillos / Alamy Stock Photo

Once all of the delicious street foods Jerusalem has to offer have been tried and enjoyed, it’s time to wash everything down with some knafeh. A traditional Arab dessert made with shredded pastry noodles covered with sweetened sheep or goat’s cheese, knafeh is seared on both sides and served topped with spiced syrup and crushed pistachios. The final product is warm, bursting with exquisitely rich flavours, and unlike any other dessert you have ever tried before. Knafeh can be found in most Arab bakeries or sweet shops in the Old City and East Jerusalem, with one of the most popular vendors being Jaffar and Sons Pastry Cafe. 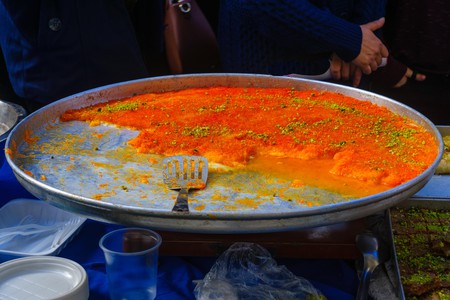 Knafeh, a traditional Middle Eastern dessert, can be found in East Jerusalem and the Old City | © RnDmS / Alamy Stock Photo

The following eateries deserve a mention as some of Jerusalem’s top street food spots that offer a variety of all the best snack foods included in this list.

If you’re eating on a budget, check out our guide to the best cheap restaurants in Jerusalem.