Over the last decade, Israel has gained more and more international recognition for its contributions to art and design. While Israel’s visual artists often interrogate political and national issues, its designers tend to showcase an innovative and experimental approach to design practices and aesthetics. Working across the globe, these ten designers and studios represent a selection of Israel’s leading and influential creative minds. 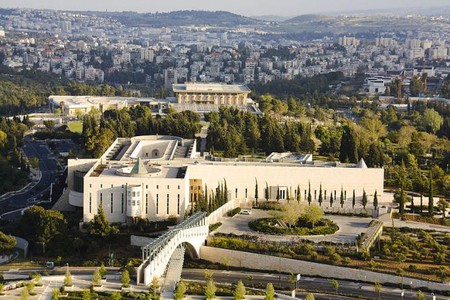 UMAMY Design Group is currently made up of Doron Oryan, Eran Apelbaum and Sarit Atzitz, all graduates of the Holon Institute of Technology. The group’s manifesto is ‘We want to make the world a better place’; in order to achieve this, UMAMY design objects that they think will ‘make people smile, think or just wonder’. Working with local and international manufacturers, UMAMY’s humorous and innovative designs frequently explore cultural frameworks, societies and habits. Their latest design, Kisos Vase (2013), a flower vase designed for 3D printing, makes use of the new technology of stereo lithography. What makes the Kisos Vase stand out is its innovative approach to the old vs. the new; it retains visible qualities of nature despite its digital production method. An ambitious studio with a sense of perspective, UMAMY aims to influence Israeli design through their participation in various design activities throughout the country. 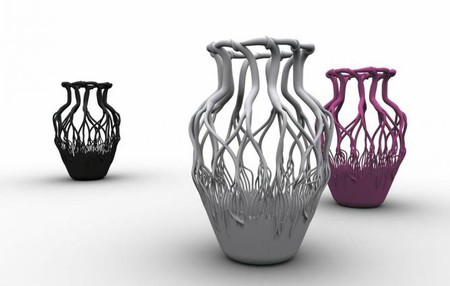 Bakery was founded in 2009 by designers Ran Amitai and Gilli Kuchik, both of whom are graduates from the Bezalel Academy of Art and Design, Jerusalem (Department of Industrial Design). The studio is based in Tel Aviv and has featured in numerous exhibitions and design fairs including Fresh Design, Tel Aviv (2013). Bakery designs reinterpret traditional production methods, and so generate playful and experimental works. Their design Nom (Nature of Material, 2010), produced by design brand Capellini and shown at Milan Design Week 2010, consists of a series of stackable lightweight furniture. A complex yet beautiful structure, the design concept combines origami and natural folds in laser-cut aluminium formed over a mould. The aim was to allow the surface to react naturally to the act of folding, giving rise to a piece that is both organic and constructed. NOM has been part of the Capellini collection since 2012. 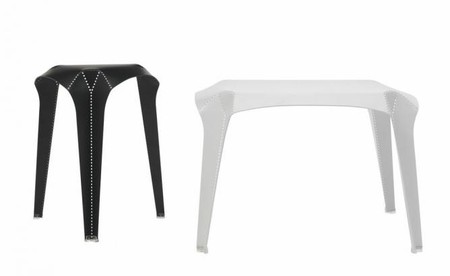 Raw Edges design studio is a collaboration between Yael Mer and Shay Alkalay. Though each designer has a very different approach to design and aesthetics, they bring these together in their surprisingly harmonious pieces. Mer’s main focus is turning two-dimensional sheet materials into curvaceous functional forms, whilst Alkalay is interested in how things move, function and react. Perhaps it is this hybrid of interests that makes the studio so special; Raw Edges have been awarded several prestigious design awards, including The British Council Talented Award. They have exhibited internationally, are collected by MoMA, New York, and their client base includes big names such as Capellini and Stella McCartney. Raw edges also produce unique, limited edition products and installations such as Tailored Stool (2008) at their London studio. This particular design employs an unconventional process, generating custom patterns that become both the mould for the stool and the surface itself; each piece is therefore tailored to the shape of the client. 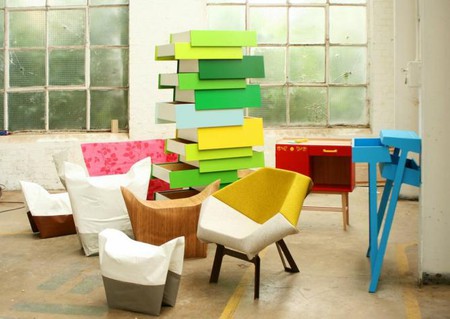 Professor Ezri Tarazi leads the versatile design studio Tarazi Studio, founded in 1996. Tarazi’s numerous works incorporate industrial, experimental and installation design projects, educational programmes, curatorial practices and writings on design theory. A leading designer, theorist and educator, Tarazi has had an illustrious career as head designer for various projects and founder of the Israeli Design Centre in 2004. His prominent design piece New Baghdad Table (2003), manufactured by Edra Design Company (Italy) is a statement of diversity and a gesture of hope. The table’s surface is made up of myriads of industrial aluminium profiles depicting a map of Iraq’s capital city. Although each piece has its own distinct, individual identity, they all come together to form a diverse yet cohesive whole. 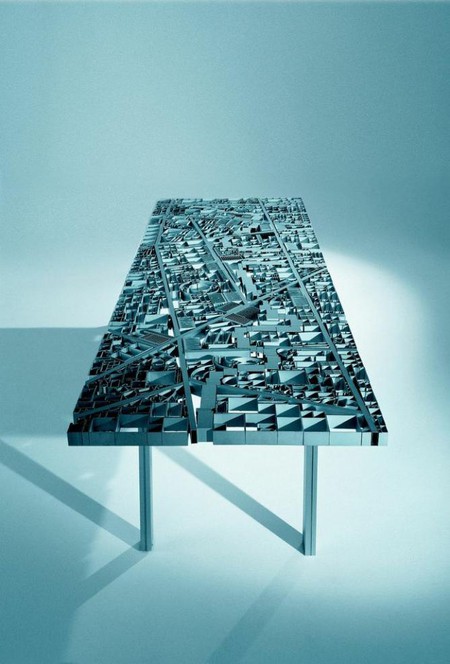 Design duo and H.I.T (Holon Academic Institute of Technology) graduates Nama Steinbock and Idan Friedman founded Reddish design studio in 2002 and are based in Jaffa, Israel. The pair cites that they spend most of their time ‘helping objects feel better about themselves’. They achieve this through a mixture of concept and product planning for international clients and independent projects, which are distributed and exhibited worldwide at events and galleries such as Beijing Design Week, Design Museum Holon and Ventura Lambrate, Milan. Their innovative, self-produced product Yakuza (2006-7) won the interior innovation award at Inspired by Cologne (2006). Yakuza consists of unique wooden tables, each of which bears a digitally printed, personalised tattoo. The wooden surface acts as a skin, onto which the designers can impress a strong cultural and personal identity, unique to each piece. 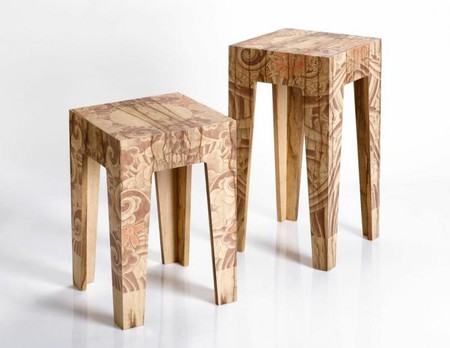 Internationally renowned London-based designer Ron Arad studied at the Jerusalem Academy of Art before going on to study at the Architectural Association in London. Throughout his distinguished career, he has established numerous design and production studios. The first, One Off, was founded in 1981 with Caroline Thorman. He established Ron Arad Associates in 1989, an architecture and design practice, and Ron Arad Architects in 2008. In 2011 he was awarded the London Design Week Medal for design excellence. Arad is known for his constant experimentation with materials, particularly steel, and his radical approach to forms and structure in furniture designs such as Oh the Farmer and the Cowman Should Be Friends – a huge stainless steel bookshelf shaped like a map of the United States. At the forefront of contemporary design, Arad has designed a number of public art pieces and architectural buildings including the Design Museum Holon. 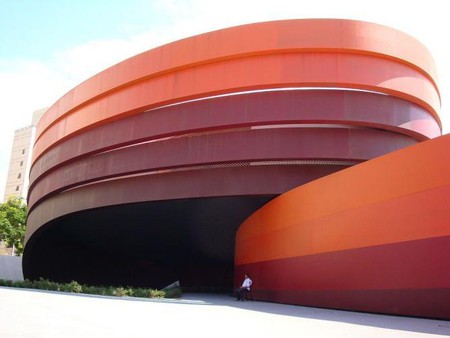 Industrial Designer Pini Leibovich founded his studio in Tel Aviv in 1997 as a step up in his career. Leibovich’s practice busies itself with three disciplines: academic research; conceptual product design and studio work; the design and development of commercial consumer goods. Ideas of order and disorder greatly shape Leibovich’s works, and point towards the nature of man’s curiosity. His goal is to have viewers interact with his design as much as possible, as it is intended to encourage feelings of happiness. In works such as the balloon-based Happiness Materials, we see that his approach to materials is both playful and structured; in addition to balloons, Leibovich has experimented with a number of different materials including but not limited to wood and cellophane. His works have been shown in both group and solo exhibitions, and can be found in the collections of several museums and galleries. 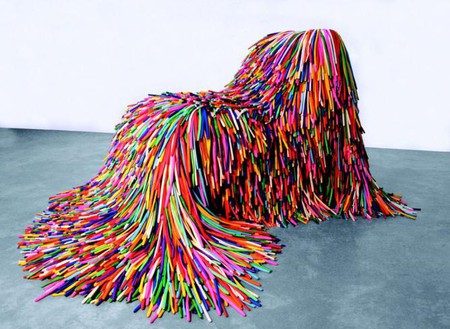 Israel-born designer and design educator Ronen Kadushin has been based in Berlin since 2005. He has taught furniture design and design creativity at several leading Israeli and European design academies, and in 2004 opened the Open Design Concept. This project, inspired by Open Source Software, enables users to download, copy, modify and produce his products. As his next step towards digital sharing, Kadushin took this concept and used it as the basis for his design and production company Open Design. Here he produces furniture, lighting and accessories which are then produced in Berlin and sold throughout Europe. Kadushin’s Open Design products are shown in design exhibitions worldwide and feature in several design publications. In addition to Open Design products, Kadushin creates one-of-a-kind self-production works such as Discast Chair (1999). Made of sand-cast aluminium, this piece is an experiment with process and unforeseen results, allowing the molten aluminium to overflow and form a unique structure. 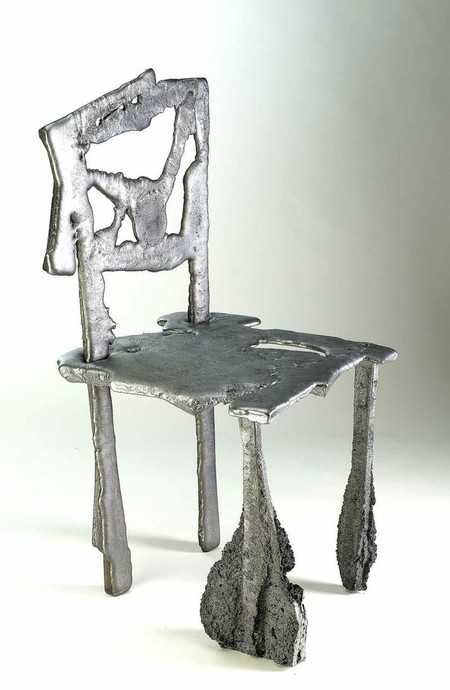 Rami Tareef is a successful Industrial Designer who exhibits internationally at prestigious design events such as Budapest Design Week (2013), Fresh Paint, Tel Aviv (2013), Super Brands London (part of London Design Festival, 2012) and Milan Design Week (2012). He graduated from the Bezalel Academy of Art and Design, Jerusalem with a Masters in Industrial Design and established his own design studio in 2011. Tareef’s designs such as COD explore the crossover between craft and design. COD was ‘born of [his] desire to create by embracing the truth of the material’ and questions the fundamental differences and similarities in thought, planning and execution between craft and design. These hybrid designs based on wicker furniture preserve the value of traditional craft products whilst incorporating elements of innovative mass-produced design. 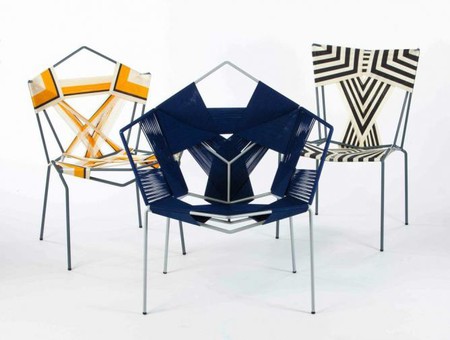 Yaacov Kaufman is a lighting, furniture and product designer based in Tel Aviv, who works throughout Israel and Europe. During the course of his successful career, he has collaborated with many design companies including Lumina Italia, Tecno, Arflex, Luxo-Luxit, Porro, Serien and Monkey Business. Kaufman gives lectures at the Industrial Design Department at Bezalel Academy of Art and Design, Jerusalem, and recently co-founded a successful contemporary furniture start-up, Gaga&Design, in Tel Aviv with Avi Burla in 2010. With twenty international solo exhibitions in the field of experimental and conceptual design under his belt, Kaufman is an established figure in contemporary design. Alongside production pieces, he also creates unique designs such as Screen Floor Lamp and concept-oriented works such as those shown in his recent solo exhibition, Running in Circles, at the Tel Aviv Museum (2012). 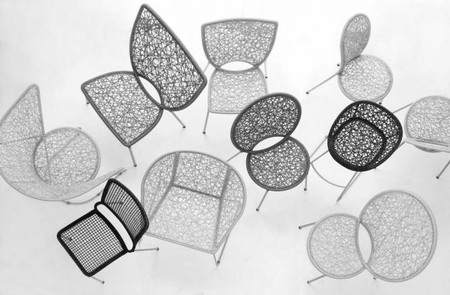 © Yaacov Kaufman
Give us feedback