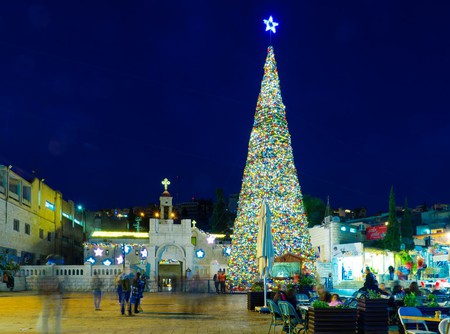 Nazareth is a charming and richly historical city nestled in the Galilee region of Israel’s north. Home to the largest Arab Christian community in Israel, the 2,000-year-old city bursts into life over the Christmas period. With a range of festive events, culinary delights, and fascinating historical sites, Nazareth makes for a special place to experience Christmas in the Holy Land.

It’s the place where Jesus grew up

There’s something more meaningful and authentic about celebrating Christmas in the location believed to be Jesus’s childhood home. After all, Christmas is the celebration of his birth. The streets you wander through in Nazareth might well be the same spots where Jesus once walked – pretty cool, no?

It’s home to the magnificent Basilica of Annunciation

This beautiful, towering church is one of Nazareth’s prime attractions. Located in the city centre, it is a two-storey building built over Byzantine and Crusader remains. Upon its completion in 1969, it became the largest Christian church in the Middle East.

It is not just any church, however: this church is believed to stand over the spot where Mary’s house once stood. Indeed, on its lower floor lies an ancient cave-like grotto that is said to have been her home. This is a special location to celebrate Christmas, and mass will take place here at midnight on December 24. 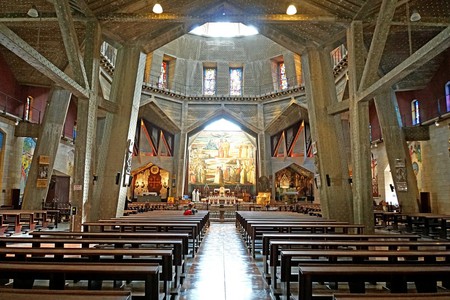 … and many more important Christian sites

Nazareth is home to numerous churches, the most beautiful of which is arguably the Salesian Church of Jesus the Adolescent, which offers visitors a stunning view from its peak over the city. Other notable churches include St Gabriel’s Church, built during the 1600s, which is where Gabriel is said to have appeared before the Virgin Mary; and The Synagogue Church, which Christian tradition stipulates is where Jesus studied and prayed.

It hosts plenty of Christmas celebrations

Fireworks, live music and entertainment, giant, light-covered Christmas trees, and a huge street parade full of colours, costumes, and music – these are just some of the things you can expect when it comes to Christmas celebrations in Nazareth! The giant Christmas trees will be lit up from December 16, while the Christmas Parade will take place on December 24 at 4pm, and will end at the Church of Annunciation.

… and a charming Christmas market

Now a tradition in Nazareth, this market will open its doors on December 18 until December 22. Located at Mary’s Well Square, near the Basilica of the Annunciation, the market features arts and crafts, local produce, delicious food and family-oriented entertainment, including live music and a Santa! Head there for the early evening to soak up the festive spirit.

Forget your traditional Christmas roast dinners – while in Nazareth you will treat your tastebuds with scrumptiously sweet baklava and knaffe, some of the best hummus in Israel (Imad Hummus is a must), and other regional delicacies, such as Lebanese Arayes. Meander through Nazareth’s classic Arab market for fresh produce, colourful spices, and tasty street food and celebrate Christmas Middle Eastern style!