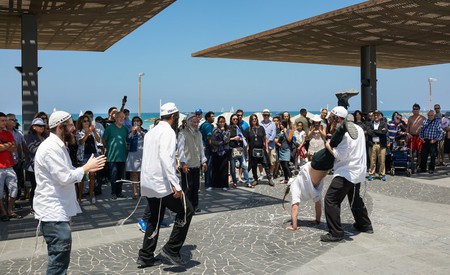 Techno music blasting from graffiti-ridden vans, wild, ecstatic dancing in the street, and booze-filled bar mitzvah performances – the Na Nachs aren’t your typical ultra orthodox Jewish group. These messianic, fervently religious men are on a holy mission to rave and spread joy, making them one of Israel’s most compelling and unusual religious sects.

The Na Nachs are a recently emerged offshoot of the Bratslav Hassidim, an ultra Orthodox Jewish sect who follow the teachings of Rebbe Nachman of Breslov, a kabbalist mystic who died in the early nineteenth century, in what is now Ukraine. He was the great grandson of the Baal Shem Tov – the founder of the spiritual Hasidic movement.

What sets the Na Nachs apart from the Bratslav Hassidim is their wholehearted belief that a letter found by a rabbi in 1922, in Tiberias, Israel, contained a cryptic message from Rebbe Nachman himself. Seen as a “Letter from Heaven”, it contained what they believe were Nachman’s teachings.

At the core of Na Nach faith is the belief that happiness is the gateway to becoming closer with God, and that spreading this happiness to other people is a mitzvah, or spiritual command. Once enough people know this message, the Messiah will come, so they believe. This is the basis of their wild antics that they have become known for in Israel.

Indeed, in recent decades the Na Nachs have captured people’s attention throughout Israel by driving around in white vans decked out with colourful Na Nach-themed graffiti, blasting out religious-electronic music, blowing shofars (a horn sacred in Judaism) and dancing wildly at red lights. They are also popular entertainment acts at wedding and bar mitzvah parties. However, don’t let their partying and joyous demeanour distract you from the fact that these are devoutly religious men – they simply have different ways of expressing this than most.

The purpose of these joyrides is to spread joy, and also to disseminate their religious literature. Even if you don’t see them in the flesh, there is no escaping the reaches of the Na Nachs in Israel: their mantra – “Na Nach Nachma Nachman Meuman” – is littered throughout the country via stickers, posters, and graffiti.

Na Nachs live mainly in Israel but there are small communities in New York and in Ukraine. Members come from a range of backgrounds, from secular party lovers to religiously educated teens and ex criminals, all seeking a spiritual lifestyle and closer connection to God, and drawn in by the Na Nach’s infectious joy. Like other ultra Orthodox Jews, they have beards and sidelocks, but they can be distinguished by their distinctive white kippa (yarmulka), with its tasseled top and their mantra in Hebrew lettering, and their lack of traditional garb.

While Israel’s Hasidic population generally have tense relations (to say the least) with the country’s secular Jewish population – a complex subject – the Na Nachs have been received more favourably. They are usually greeted with a mixture of bewilderment and laughter, and Nechi Nech, Israel’s best hip hop artist, even featured them in the music video to his popular song, “Yiddish Rasta Man”.

If the core tenet of their belief is spreading happiness, then the Na Nachs seem to succeed through their joyrides – until, that is, the traffic light turns green, Israeli road rage springs into life, and the sound of electronic music is overrun by cars honking.