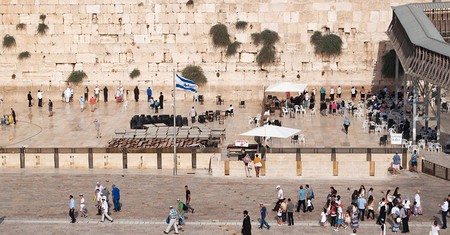 There are countless historical landmarks in the holy city, and joining a walking tour can help you enjoy the beautiful sites without getting lost in Jerusalem’s maze of alleyways.

Walking through Jerusalem’s streets is like taking a trip back in time – behind every wall is a monument, through every archway a holy site, and lining every street an ancient building with a fascinating story to tell. The Old City alone, defined by its ornate structures and narrow pathways, showcases a past of conquests, empires and royalty. Without the help of a guide, however, visitors risk missing out on crucial historical aspects, many of which continue to inform the present and shape the complex socio-political realities of modern-day Israel. For those interested in learning about religious sites and archaeological remnants, or those who are looking to explore the city independently, free and budget walking tours can get you started on one unforgettable journey.

Take in the views of the most popular Old City landmarks, including Judaism’s holiest site, the Western Wall, the Church of the Holy Sepulchre and the Dome of the Rock, one of Islam’s most important places and an architectural wonder. Sandemans New Europe’s free walking tours begin outside the Jaffa Gate daily at 11am, 2pm and 5pm and are available in English and Spanish. Also included in the tour is a stop at the restored Hurva Synagogue in the Jewish Quarter, as well as views of the scenic Mount of Olives and the world-famous David’s Citadel. Sandemans’ free tours typically take two hours to complete and feature stops on many Old City rooftops. Remember to dress modestly and avoid wearing sleeveless shirts, shorts or miniskirts when visiting religious sites. Tipping the guide is optional, though recommended.

For more on the tour: https://www.neweuropetours.eu/jerusalem-walking-tours/ 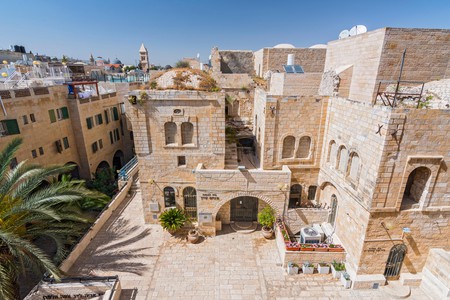 Discover the four quarters of the Old City

Departing each day at 10.20am from Abraham Hostel, this free walking tour covers all four quarters of the Old City: Jewish, Armenian, Christian and Muslim. Among the many sites that the Abraham Hostel tour covers are major landmarks such as the Western Wall, the Church of the Holy Sepulchre and the Jerusalem Citadel. The excursion lasts roughly three hours and is available to the general public, although it is popular among young travellers staying at the hostel, which lies in the Downtown Triangle. The hostel – Jerusalem’s largest – is the starting point of other moderately priced tours to the West Bank and throughout greater Israel. Tipping the volunteer guide at the end of the tour is customary.

Visit the Abraham Hostel site for more information about the tours on offer. 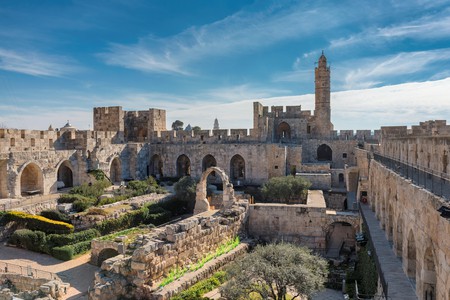 The Tower of David, also known as the Jerusalem Citadel, is a popular destination for visitors to the holy city | © lucky-photographer / Alamy Stock Photo

For travellers looking to venture through the city on their own time, the Jerusalem municipality has launched a popular mobile application in English. Audio Tours of Jerusalem presents more than 20 engaging walking tours through the Old City as well as the modern city centre, highlighting places of worship, landmarks and more, with additional assistance for the visually impaired. Try the five-hour Via Dolorosa Tour to follow in the footsteps of Jesus, or check out the Ramparts Walk to experience the Old City from a higher vantage point. The free app features images, text summaries and maps, as well as handy information on transportation, parking, public toilets and wheelchair-accessible sites. 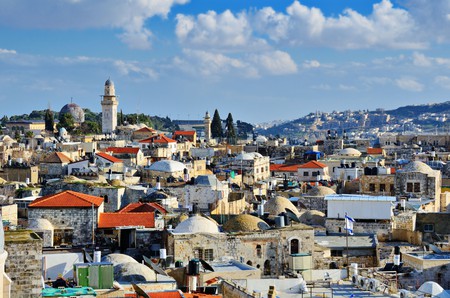 Wheelchair-friendly tours of the Old City

With its bumpy stone roads and narrow alleyways, navigating the Old City in a wheelchair has long been a challenge. Thanks to a recently launched municipality project that has overseen the addition of ramps and the levelling of stone streets, over four kilometres (2.4 miles) of roads in the walled city are now completely accessible to wheelchairs and pushchairs. Using the free mobile Accessible JLM application, which is available in nine languages, visitors can tour all four quarters of the Old City and find the best path to get to the Western Wall, the Dome of the Rock and the Church of the Holy Sepulchre, in addition to restaurants, hotels and museums. Users can also customise tours by selecting from several points of interest, after which the app creates an optimised route to follow.

The Accessible JLM app is available on Google Play and the App Store. 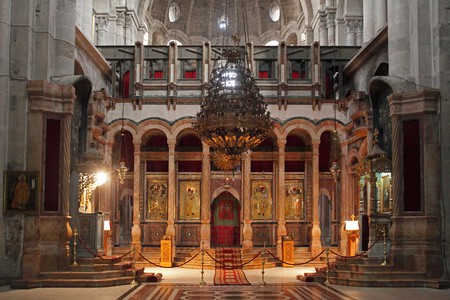 A mobile app searches the best wheelchair-friendly routes to the city’s main attractions, such as the Church of the Holy Sepulchre | © Globuss Images / Alamy Stock Photo

A tour of biblical Jerusalem

Discover Jerusalem’s rich biblical past with one of the municipality’s budget-friendly Saturday tours. Starting with scenic views of the Temple Mount (known to Muslims as the Haram esh-Sharif), participants will walk to the Western Wall and explore the City of David, a fascinating archaeological site with artefacts dating back three millennia. The three-hour-long excursion generally begins at 10am from Safra Square in the city centre once a month, though a specific meeting point is delivered to participants by email after booking. The tour only costs 15 Israeli shekels (roughly £3.41), and children under the age of six go free.

To book the tour: https://www.itraveljerusalem.com/evt/a-tour-of-biblical-jerusalem/ 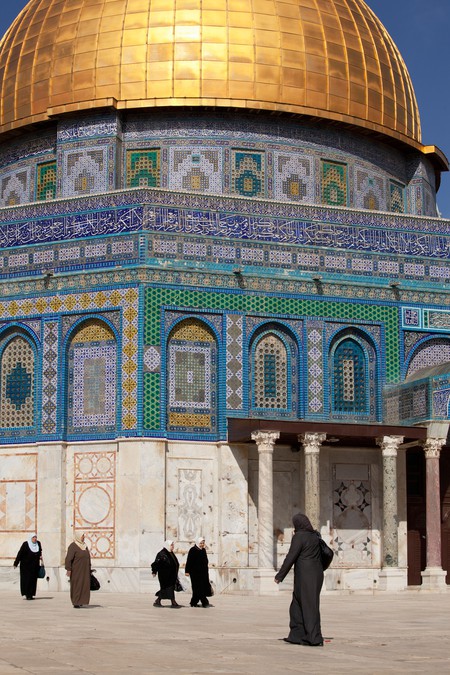 Explore the historic wonders of the Kidron Valley, a site of several important biblical exploits, large-scale monuments and ancient tombs. Running between the Old City and the Mount of Olives, it was through this valley that King David fled from his wicked son Absalom, according to the Old Testament. In the New Testament, Jesus was said to have journeyed from Jerusalem to Bethany to visit Lazarus via the Kidron Valley. The Jerusalem municipality’s tour of this area explores these stories and provides an in-depth look at the unique tombs that dot the valley. Tours cost 15 shekels (£3.41), are offered in English and depart on Saturdays at 10am once a month. The Kidron Valley tour is not accessible for buggies or wheelchairs.

To book the tour: https://www.itraveljerusalem.com/evt/a-tour-kidron-valley/ 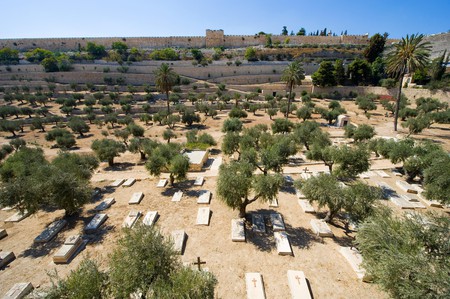 A Christian cemetery is part of the monthly tour across the Kidron Valley, a site at the foot of the Mount of Olives | © Robert Hoetink / Alamy Stock Photo

Journey from Mount Zion to the Wailing Wall

Mount Zion was once the highest point in ancient Jerusalem before it expanded, and today is home to a number of significant Christian, Jewish and Muslim sites. Located just outside the Old City walls, this inexpensive (15 shekels or £3.41) guided tour will take you through Dormition Abbey, a historic Benedictine church where historians believe Jesus held the Last Supper, and King David – revered by Jews, Christians and Muslims alike – was buried. Please note that this tour is only available once every two months, so you should check the municipality’s calendar. The Mount Zion tour is three hours long and ideal for families.

To book the tour: https://www.itraveljerusalem.com/evt/tour-mount-zion/ 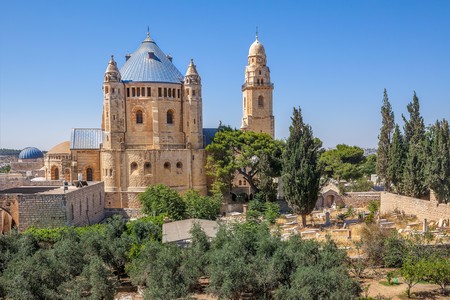